MICHELLE: Hey, Melinda! Why did the Easter egg hide?

MELINDA: Hmmm… I don’t know, Michelle. Why did the Easter egg hide?

MICHELLE: ‘Cos he was a little chicken.

MICHELLE: It actually genuinely makes me giggle, but I am predisposed to find chickies amusing.

Anyway! Encounter anything amusing in the realm of manga this week? 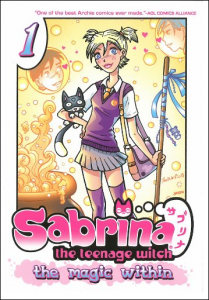 MELINDA: Indeed I did! My first read this week was volume one of Tania del Rio’s Sabrina the Teenage Witch: The Magic Within, a manga-style graphic novel collecting the first ten issues of her series, which began its run in 2004. This came out just last week from Archie Comics, and though I realize it’s comprised of previously released material, I’m surprised it hasn’t gotten more buzz.

Sabrina’s been an Archie Comics staple since the 1960s, and she’s appeared in such a variety of mediums (comic books, animated television, live-action television), it’s difficult to imagine that more than a handful of Americans my age and younger could have avoided running into her one way or another. When this graphic novel appeared in our mailbox, my husband—who’d been a fan of the 1996 live-action sitcom starring Melissa Joan Hart—grabbed it up to read before I even had a chance. I was in the thick of my own professional acting career during most of that series’ 7-year run, and I hadn’t been a fan of comic books growing up, so my own history with Sabrina was fairly minimal. Yet here she is now, right in my wheelhouse!

For the two or three people who’ve never encountered her, Sabrina Spellman is a typical North American teenager—mostly. Her days are spent navigating the treacherous world of high school, friendships, and teen romance. Her nights are spent in another world entirely—the Magical Realm, where she studies her true birthright, witchcraft. As one of a growing number of witches who have chosen to live in the mortal world (Sabrina shares a house with her two grownup aunts and a talking cat, Salem), Sabrina delicately balances two separate lives and two separate love interests—shy jock Harvey in the mortal world and charismatic player Shinji in the Magical Realm.

If this sounds like ideal fodder for shoujo manga, Archie Comics obviously agrees—and they’re not wrong, for the most part. Though the series’ episodic format is initially a bit lacking in the kind of depth and character development we tend to expect from manga, later chapters really begin to gel, growing into a character-driven supernatural romance with one hell of a cliffhanger at the end of the volume. And if I’d like to see the story tip a bit more towards supernatural adventure and a bit less towards romance, that’s a very personal quibble.

Where the series really betrays itself as North American manga style comics, is in the artwork—not that this is a big surprise. For my tastes as a manga fan, The Magic Within fails where a whole lot of OEL manga fails, and that’s with cramped, over-toned pages filled to the last inch with ink. As a shoujo manga fan accustomed to delicate line art, sparse backgrounds, and gracefully flowing panel layouts, Sabrina begins as a cluttered, disorienting, inky assault. Fortunately, it’s engaging enough to ultimately render this a non-issue, and by the end of the book I was anxious for more.

MICHELLE: I actually watched some of the live-action Sabrina, though not avidly. And so it feels weird to me that there’s suddenly a love interest called “Shinji” in this comic. Perhaps this is jaded, and I am completely overlooking all of the good things you just mentioned, but this strikes me as “manga fans will think it’s manga if there’s a Japanese guy in it!”

MELINDA: I definitely get where you’re coming from, and maybe my minimal exposure to earlier versions of Sabrina makes that easier for me to swallow. But the truth is, Shinji is so charming a character, it’s difficult not to just plain like him. I think a chapter later in the book where we meet more of his family (including a mortal uncle who visits from Japan and popularizes Salem as a stuffed mascot—much to Salem’s dismay) helps, too, by giving him some real background. And I’ll admit I can’t help rooting for him in the ongoing Harvey-Shinji romantic showdown (where, as Guy #2, he’s obviously doomed), though at this point, I’m more interested in the volume-end cliffhanger, which is actually all about Shinji, and looks to be potentially quite serious.

The truth is, I enjoyed this book a lot. And for what it’s worth, my Sabrina-fan husband gave it an enthusiastic thumbs-up as well.

So what have you been amusing yourself with this week? 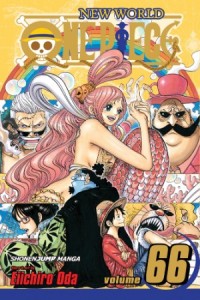 MICHELLE: The most amusing manga I read this week was our mutual read for today’s column, but I suppose we’ll get to that in a moment.

My solo read this week was volume 66 of One Piece, which you totally still need to read. This series experienced a two-year time jump prior to volume 61, and volume 66 wraps up the first arc of the “New World,” in which the Straw Hat pirates have reunited and helped thwart an attempt by some human-hating fish-men pirates to take over Fish-Man Island.

This arc has not been an emotional one for our characters—they’re helping, but they’re not personally invested. Rather, the arc is about a fresh start, and so far seems intended as a backdrop against which our heroes can show off the new techniques they’ve learned in the past two years, as well as some of the insecurities they’ve conquered—Chopper no longer has stigma about being a monster, Usopp no longer reacts to taunts about being the weak link in the crew. That isn’t to say that there aren’t some truly nice moments—I’m particularly fond of the several pages depicting the celebratory feast after the battle is won.

A lot of the other things I thought were nifty were more plot-related. I always like it when there’s talk of adding someone to the crew, for example, and then there was a lot of stuff about the mystery of the missing 100 years of history—a subplot that’s been on the back burner recently—and a suggestion that Luffy might possess an ability rare for a human, one which only the previous Pirate King possessed. The one sour note was the depiction of a large female villain, but then I realized that Oda actually does extremely well at involving large heroic people in his series (of both genders), so my brief flare of irritation quickly faded.

Ultimately, this arc’s been fun, but not One Piece at its best.

MELINDA: I suspect any really long series is going to have its less exciting arcs, and at 66 volumes One Piece has certainly earned a rest. I hope for your sake that it is leading up to further greatness, and not petering out like most long series eventually do. I’ll admit it’s that 66 volumes that makes venturing further than the three I’ve personally read feel really daunting, but I keep planning to dig back in!

MICHELLE: I think if you could just get to volume nine, you’d see what the fuss is about!

Feel up to introducing our mutual read? 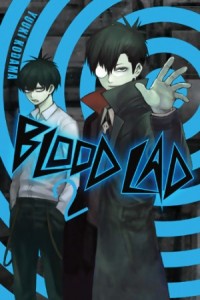 MELINDA: Sure! Our mutual read this week was volume two of Yuuki Kodama’s Blood Lad, a sort of horror/comedy seinen manga currently running in Kadowaka Shoten’s Young Ace and being released here in double-length omnibus editions by Yen Press. I read (and enjoyed!) the first volume of the series back in December, but Michelle’s just catching up now, so for those of you who are also tuning in for the first time, I’ll briefly go over the premise.

Staz is a young vampire who is also boss of a largish territory in the lower (read: slummier) levels of the demon world. He’s also obsessed with mortal Japanese pop culture, so when a Japanese teenager named Fuyumi accidentally turns up in the demon world, he latches on to her right away, demanding her opinions on manga, anime, and video games. As a human, Fuyumi’s chances of survival are slim in the demon world, and it isn’t long before she’s killed and becomes a ghost. This leads Staz on a quest to bring her back to life—partly for his own sake (he’s dying for some real time in the human world) and partly for hers, which is surprising to Staz, as he generally cares little for others. This leads to all sorts of mayhem, including a run-in with Staz’ friend/rival (a werewolf creatively named “Wolf”), who ultimately joins him in his quest to resurrect Fuyumi.

One thing that’s mentioned a few times in volume one is that though Staz lives in the lower-class area of the demon world, he’s actually a pure-blood vampire—a direct descendant of Dracula, even—and this becomes even more important in volume two, where he finds himself in the thick of a family plot, hatched by his manipulative older brother Braz and carried out with the help of their ruthless little sister, Liz. Though volume two begins with Staz directly at odds with his siblings, one of the volume’s nicest surprises is the evolution of Liz’s character as she begins to realize just how controlling and self-serving her oldest brother is. The series’ other delightful surprise—in my opinion at least—is its genuinely funny comedy, but I probably should let Michelle weigh in before going on further about that.

MICHELLE: Originally, I really didn’t think Blood Lad would be something I’d enjoy, but after your experience with it, I couldn’t help but be curious. And now I’m quite glad I decided to check it out, because I liked it very much!

While I like Staz and Fuyumi and am reasonably interested in the fulfillment of his quest, the thing I like best about this series is how it doesn’t do what I expect. For example, one might expect female characters as blatantly buxom as these to be put into fan service poses at every turn, but that doesn’t really happen too often. And that friend/rival, Wolf? He actually takes a break from a fight he’s losing, allowing Staz to take over. Like, with absolutely zero posturing or hurt pride! That is certainly rare!

The very best part, though, is the comedy. Many of the best lines go to Mamejirou, a three-eyed, prescient, low-level demon critter who is pretty much as adorable as it gets. There’s a recurring gag in this volume where boisterous teleportation expert Bell makes a grand entrance to a scene, at which point Mamejirou says something like, “Seriously. Rude.” I love him. (I suppose this is not surprising, considering my love for Koh in Silver Diamond.) The adaptation is also well done, and incorporates a few meme references that I found fun.

So I suppose I need to thank you for convincing me to give Blood Lad a chance!

MELINDA: I’m both thrilled and relieved that you ended up enjoying this manga, because I would have felt very guilty if you hadn’t! And yes, yes on the comedy. Volume two in particular contains a lot of older manga references as well, from Lupin III to Dragon Ball (chapter 15’s Dragon Ball bit is just plain awesome), though probably these are most enjoyable for long-time manga fans. That’s really much of the series’ charm, though. It’s a love song to otaku, through and through, and who can resist that?

MICHELLE: I had expected it to be longer (only seven volumes appear to be out in Japan right now, with the eighth due next week, if I am interpreting Amazon.jp correctly), but I guess because it’s seinen, it’s serialized less often. Which means after the third Yen Press volume in May (comprising volumes five and six), we might have to wait a while. I will miss Mamejirou in the interim!

MELINDA: As will I! Thanks for bringing this over, Yen Press!