One day long ago when I was still very small my parents brought home for me a box filled with Great Illustrated Classics–small, compact adaptations of classic literature with illustrations on almost every other page intended to introduce younger readers to some of the great, influential stories of the Western canon. I devoured them. It’s largely thanks to that series that I became so well versed in the classics. When I was older I would go on to read the originals of some of my favorites. And even those that I never got around to, I became familiar enough with their stories that I could hold my own in conversation and understand references made to them.

Literacy is something that I care very deeply about. Closely related to that, I also feel that exposure to the classic stories that have gone on to become such an integral and influential part of Western culture and world literature is important. However, I realize how intimidating those classics can be, especially for those who are reluctant readers to being with, or who simply don’t enjoy the authors’ styles of writing or find the length of some of the originals to be formidable. Because of that, I believe that efforts to adapt these stories in a way that is more approachable and appealing to a larger audience can be extremely valuable, which brings me to Manga Classics.

Manga Classics is a line of graphic novel adaptations jointly released by Udon Entertainment and Morpheus Publishing. Their aim is to present faithful, high-quality adaptations of classic stories in a format intended to be especially appealing to young adults–that is, full-length, manga-style graphic novels. Udon isn’t the only publisher to attempt something similar to this. Recently I’ve seen other comics, graphic novel, and manga adaptations of classics released by publishers like Marvel and One Peace Books (to provide just two examples) with varying levels of success.

Strong adaptations can be notoriously difficult to achieve. Purists will often outright shun adaptations as they almost never carry the same nuance and complexity found in the source material or because they may stray too far from the original. Adaptations are especially challenging when trying to present a story in an entirely different medium, such as adapting prose into comics or film. For me, I consider an adaptation to be a great one if it is entertaining and engaging in its own right while at the same time inspiring readers (or viewers) to seek out the original stories. I feel that Manga Classics’ first two adaptations have accomplished this. 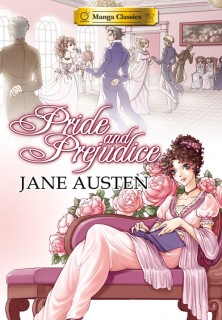 The Manga Classics series debuted in 2014 with adaptations of Jane Austen’s Pride & Prejudice and Victor Hugo’s Les Misérables. Out of the two, I am most familiar with Pride & Prejudice. I’ve read the original, I’ve seen many of its film and television adaptations (if you’ve not already discovered the recent webseries The Lizzie Bennet Diaries, I highly recommend it), and back in high school I was actually even a main cast member in a Pride & Prejudice stage production.

The original Pride & Prejudice was first published in England in 1813. The story follows Elizabeth Bennet, the second-oldest daughter of an English family with a country estate outside of London. Elizabeth’s mother is determined to see her five daughters married, and married well, so when the wealthy (and young) bachelor Mr. Bingley moves into the neighborhood, her scheming immediately begins. Fortunately, Bingley and Jane, the eldest Bennet daughter, hit it off. Unfortunately, due to some misunderstandings and interference from Bingley’s best friend Mr. Darcy, their romance is cut short. And because of that, Elizabeth’s opinion of Darcy suffers greatly, not that she held him in very high regard to begin with. To add to the awkwardness, Darcy, to his dismay, seems to have developed feelings for Elizabeth. Things get even more complicated from there as manners, social standing, morals, and some very strong personalities come into play before the Bennet daughters find their way in life and love. 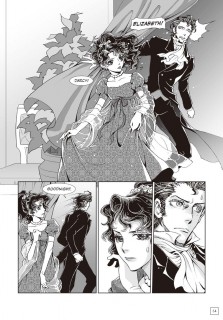 Reading the Manga Classics version of Pride & Prejudice reminded me how much I enjoy the original novel, its story, and its characters. I was also struck by how perfectly Austen’s work is suited for shoujo. The story has been adapted by Stacy King and illustrated by Po Tse. The narrative has been slimmed down and largely focuses on Elizabeth and the ups and downs of her delightfully antagonistic relationship with Darcy. All of the major plot points are still there although some of the other characters (such as Elizabeth’s younger sisters) aren’t as fully developed. But the story still works and works quite well. The only thing I didn’t really like about Manga Classics’ Pride & Prejudice was the portrayal of Mr. Collins, the heir to the Bennet estate. To some extent he serves as the story’s comic relief, but he comes across as too much of a caricature in the graphic novel (visually and narratively) which clashes in style from the rest of the comic. Generally though, Po Tse’s artwork is quite lovely and occasionally even stunning. Elizabeth and Jane’s hair is gorgeously drawn and particular attention has been given to Regency period clothing and architecture as well. (A preview of the first chapter is available here!) 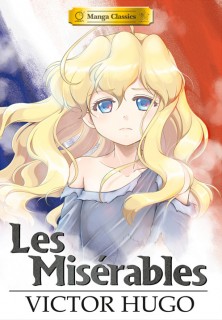 I am much less familiar with Les Misérables. Although I know the basic story of the novel, I’ve never actually read the original. Nor have I seen any of its direct adaptations. However, I have listened to multiple sound recordings of the musical many, many times. I’ve seen the recent 2012 film adaptation of the musical as well, but that’s a couple steps removed from Hugo’s original.

Les Misérables was first published in France in 1862. The novel (one of the longest ever written) is an epic work of historical fiction set in the first half of the 19th-century, a rather tumultuous time in France. The novel begins in 1815 after the defeat of Napoleon Bonaparte and, following a large cast of characters, digressions, and subplots, climaxes with the June 1832 uprising in Paris. The most well-known story out of Les Misérables is that of the ex-convict Jean Valjean, the officer Javert whose goal is to recapture Valjean, and a young orphan girl named Cosette who becomes Valjean’s charge. Those three individuals and their relationships and connections to one another and the rest of the characters form the core of Les Misérables. Politics, religion, economic and social conditions, philosophy, morality, redemption, and love all have an important role to play in the novel as well. 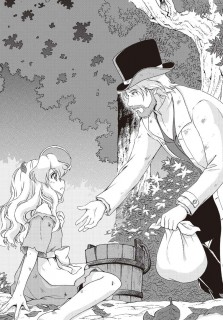 Because I’m not as familiar with the original Les Misérables it’s difficult for me definitively say how the Manga Classics’ adaptation directly compares. However, I can say that it reads very well. Most of the subplots have been dropped in favor of the main storyline following the Valjean and Cosette and those who are directly involved with them. The adapter, Crystal Silvermoon, has taken great care to consider other adaptations of Les Misérables in addition to the original in the creation of the graphic novel. Because Les Misérables is so lengthy and complex there would be no possible way to include everything, but the most iconic scenes are all present in the Manga Classics adaptation. Stacy King provided additional assistance with the scripting and SunNeko Lee served as the volume’s illustrator. Stylistically, the art is a little simpler than that found in the Pride & Prejudice adaptation. However, it is more even in tone which suits the story’s serious and dramatic nature. Once again, particular attention has been given to the setting. I found the Les Misérables graphic novel to be engaging and, perhaps more importantly, it’s the first adaptation that has really made me interested in picking up the original.

Because it is so easy to create an unsatisfying adaptation of any work, let alone a work that is well-loved or held in high esteem, and after seeing so many poor adaptations, I’ll admit that I approached Manga Classics with some apprehension. However, I was very happy to discover that the line’s first two adaptations were very well done. Though I might have a small nitpick here or there, I sincerely enjoyed both volumes. I could easily see Manga Classics being used in a classroom setting, but I think the graphic novels will appeal to readers outside of that context as well. I am very pleased that new audiences will have the opportunity to be introduced to some of the classic works of literature in such an approachable format. Hopefully, like Great Illustrated Classics did for me, Manga Classics will inspire new generations to seek out those original stories.

Thank you to Udon Entertainment for providing copies of Pride & Prejudice and Les Misérables for review.