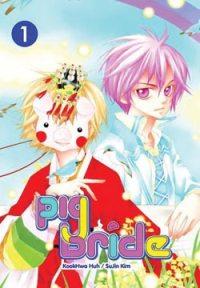 Pig Bride, Vol. 1 | By KookHwa Huh and SuJin Kim | Published by Yen Press | Rated Teen – Si-Joon is the spoiled son of a wealthy politician and his heiress wife, who, after torturing all the chickens at his summer camp, gets lost in the woods where he encounters a young girl wearing a pig mask. As though in a dream, he finds himself at the girl’s house, where he is enticed by a tableful of delicious food into agreeing to marriage with the girl, Mu-Yeon, despite the fact that he is only eight years old. A sudden attack prompts the girl to send Si-Joon back to where he came from, but not before she makes a promise to find him on his sixteenth birthday in order to consummate the marriage.

Jumping forward eight years, Si-Joon’s sixteenth birthday approaches, and fortunately he has grown up be be slightly less obnoxious than he was as a child. With his good looks and wealthy background, he is pursued relentlessly by the girls at his elite private school, leading him to declare that he dislikes strong women. Instead Si-Joon has his eye on demure Doe-Doe Eun, a blushing member of the school’s cross-stitch club who organizes a lavish birthday party for him. Convinced that the memory of his child bride in a pig mask is nothing more than a recurring dream, Si-Joon is shocked when, on the stroke of midnight as he turns sixteen, his now grown-up bride appears in his dormitory bedroom, ready to do the deed. With help from his best friend and roommate, Ji-Oh, Si-Joon manages to keep his dreaded fate temporarily at bay, but it soon becomes clear that not only can Mu-Yeon not be ignored, but that she may actually be protecting him from some greater horror—perhaps even death.

It’s difficult to see just where Pig Bride is going at this point, but though its first volume is a bit scattered and more than a bit confusing, there is a lot of potential to be found. Si-Joon’s character is maddening and sympathetic all at once. Seen obviously as a commodity by the girls he knows (as explained cooly to him by Ji-Oh, who points out that even if he never does anything with his own life, he’s still valuable for his connections and inheritance), he is easily taken in by sweet, ladylike Doe-Doe, whose unassuming manners are only a front for her real personality (ruthless, controlling psychobitch). It’s hard to feel too sorry for him when his desires are so shallow—after all, despite his talk, he fails to value the same girlish modesty in his potentially unattractive masked bride—though obviously raised by his parents at a distance, it’s not hard to see how he turned out that way.

Not that Mu-Yeon is necessarily a catch, either. Though she’s obviously doting and eager to protect him, she apparently thinks nothing of stalking Si-Joon or putting him to sleep with hallucinogenic drugs. As much a product of her strange, twisted upbringing as Si-Joon is of his, perhaps the real story here will be about both of them learning to be stronger, truer versions of themselves who can one day break free of the rigid, superstitious world they’ve been forced to be a part of.

One particularly interesting supporting character is Si-Joon’s friend, Ji-Oh. As the only character truly able to hit conniving Doe-Doe where it hurts (by stating that he does not dislike her, but simply has no interest) it’s hard not to love him, though he’s a complete cold fish around everyone other than Mu-Yeon, with whom he seems to really hit it off. One of the most charming scenes in the entire volume is one in which Ji-Oh reveals an unexpected gentle side while showing Mu-Yeon how to use the internet. On the other hand, a character who should be intriguing but so far is not, is Mu-Yeon’s sister, Mu-Hwa, a warrior with the power to exorcise spirits with her (possibly stolen) sword. Serving as the protector of both her sister and Si-Joon, her cold demeanor betrays no actual personality at this point.

Though the story in this volume is somewhat muddled, the visual storytelling is not. The art is clean, lovely, and easy to follow, with a nicely restrained use of elaborate backgrounds and imaginative panel layouts. The character designs are pretty, distinct, and occasionally even creepy, as with Mu-Yeon’s eternally smiling mask. The overall look is undeniably “manhwa”—a draw for some and a turn-off for others.

Attractive, mysterious, and above all, odd, Pig Bride is definitely worth a try.

I’ve had a couple of reviews out at Manga Recon over the past couple of days. First of all, I wrote a full review of the first volume of Yen Press’ Pig Bride which I enjoyed quite a bit, though I’m not at all sure where it’s headed. I look forward to reading the second volume.

END_OF_DOCUMENT_TOKEN_TO_BE_REPLACED

I’ve had a couple of reviews out at Manga Recon over the past couple of days. First of all, I wrote a full review of the first volume of Yen Press’ Pig Bride which I enjoyed quite a bit, though I’m not at all sure where it’s headed. I look forward to reading the second volume.