So, I used to be in fandom. No, I mean, Fandom. The kind with a capital “F.” Of course, anyone who’s ever been in Fandom knows that this means I used to read and write a whole lot of fanfiction. The less said about most of that now, the better, but somewhere around the New Year, I got a bit nostalgic and revisited my old writing. It was a fairly horrifying exercise, all told, but I came out of it all remembering just how much I enjoy ‘ships, and I don’t necessarily mean heavy-duty One True Pairing-type ‘ships (though I did have those from time-to-time), but more often the obscure, quiet, barely fannish ‘ships. I love the tiny, off-screen pairing whose story never gets told, the Big Fandom non-canon pairing with maybe three active fans, or the super-duper Big Time pairing… in a fandom with only three fans.

While it’s unlikely I’ll ever return to Fandom with the kind of zeal I once had, the whole thing got me thinking… what would I read now? Now that I read no fanfiction at all, is there any kind of ‘ship so compelling I’d throw aside everything in my too-busy day to read it? It just might be possible, I thought. And so I give you…

1. Twin Spica | Mr. Lion/Yuko Suzunari | Kou Yaginuma | Vertical, Inc – One of my very favorite things about Twin Spica is the existence of Mr. Lion, first introduced as Asumi’s imaginary friend, and then later as the ghost of a young man who died in the tragic crash of the Lion space shuttle. The series’ first volume includes some of Mr. Lion’s backstory, including his romance with a young woman named Yuko Suzunari, who, years later, ends up being Asumi’s elementary school teacher. Though Mr. Lion intended to propose to Yuko, he never got the chance before he died. 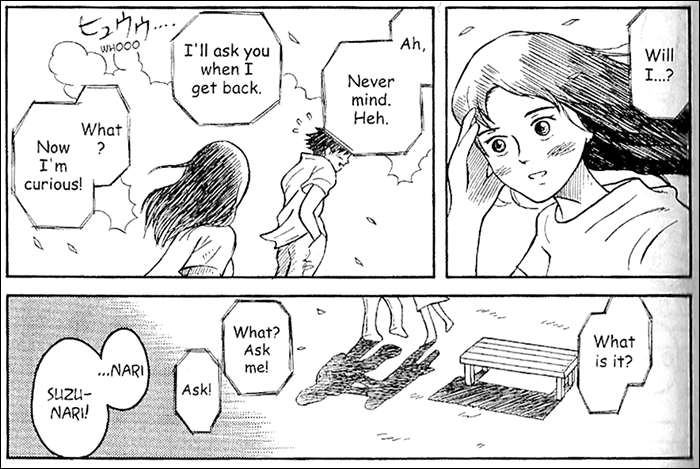 There are any number of stories I might like to read about this couple, ranging anywhere from additional backstory depicting them as students to a bittersweet reunion that can never be made real. They’re a perfect fit for fanfiction, really, with just enough existing story to get a handle on the characters, but with so little actually written, there’s plenty of ground to cover.

2. One Fine Day | No-Ah/Aileru | Sirial | Yen Press – After finishing volume two of this whimsical children’s manhwa, I went directly to Twitter and said something like, “If nobody is writing No-Ah/Aileru fanfic, I don’t know what Fandom’s been doing with its time.” At least one person expressed horror over my statement at the time, but come on. There hasn’t been a pairing more obvious since Remus Lupin and Sirius Black. 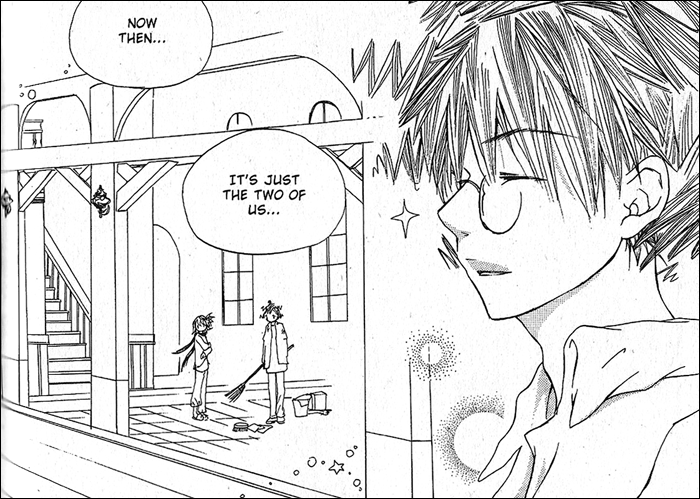 Again, this pairing could really go anywhere, and they have the advantage of being both “friends” and antagonists, depending on when you catch them. Magical powers don’t hurt either, though I’m not a big fan of overdoing that sort of thing. I’d enjoy anything from a sweet domestic scene to an out-and-out magician fight between these two. And Sirial keeps drawing them prettier and prettier, so I know it’s not just me. ;)

3. Flower of Life | Yamane/Sakai | Fumi Yoshinaga | Digital Manga Publishing – So, despite the fact that Sakai’s boyfriend clearly suspects that his girlfriend is having a crush (“Are you a lesbian?” he even asks her outright at one point), it’s possible Yoshinaga would say I am making this one up. Still, these two are adorable in their little side story in which slovenly Sakai borrows a beloved book from mature, meticulous Yamane. 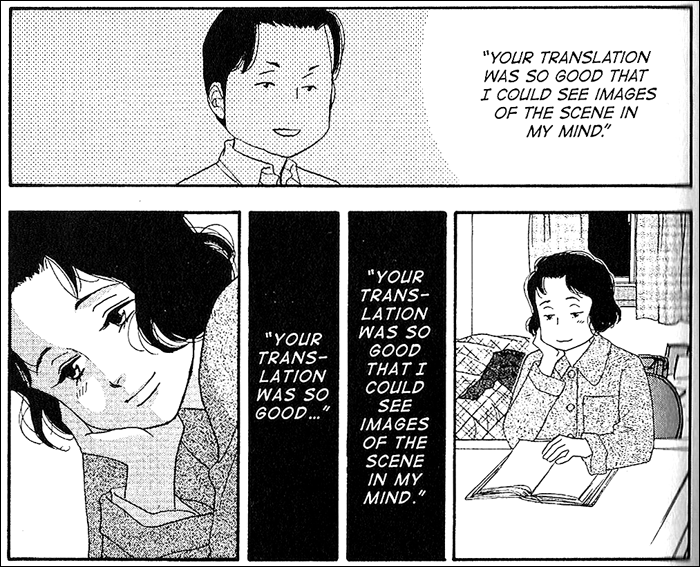 Though something set in the same time-frame as the manga could certainly be sweet, I actually think I’d prefer future-fic here, with the two meeting up as adults, or perhaps in later college years. I’d like to see how both of them might grow up–especially Yamane who appears so grown-up even in high school. I can imagine the story already, really… like the reunion of the two women near the beginning of Antique Bakery, only this time Tachibana might be right. Hey, maybe it’s a Yoshinaga crossover!

So, readers, if you did read fanfiction, what fanfiction would you like to read? Or maybe you could write me some comment-fic? :D

One Fine Day, Vol. 1 | By Sirial | Published by Yen Press – “Our fine day starts here. Would you like to join us?”

One cold, dreary afternoon, a rain-soaked cat is invited home by a mischievous young mouse and a big-brotherly dog. Their green-roofed house is difficult to find, they say, “At the end of the path of blue and red bricks,” where a young man named No-Ah soon discovers that his pair of house pets has become a trio. This sweet, simple scenario serves as a short prologue to the first chapter of One Fine Day, perfectly establishing the series’ whimsical tone and showcasing its greatest strengths from the get-go. As the volume continues, No-Ah, along with cat (Guru), dog (Nanai), and mouse (Rang) tackle life’s daily challenges, such as picnics, baking cookies, and the common cold.

Make no mistake, One Fine Day is a mess. From uneven world-building to a complete absence of plot, it lacks nearly everything required for coherent storytelling, even on the most basic level. Fortunately, it is an utterly delectable mess, poised to enchant would-be critics with the power of children, puppies, and frolicking teapots.

Much of the cast is made up of animals who resemble humans (like Guru, Nanai, and Rang) or people who resemble animals, such as No-Ah’s bird-like friends, Mr. and Mrs. Raspberry. A few are furniture. In fact, the only decidedly human characters of any consequence are No-Ah and a much-feared magician, Aileru (whose relationship with No-Ah is complicated to say the least). Like many aspects of One Fine Day, its anthropomorphic landscape is only marginally explained, which diminishes its effectiveness, if not its charm.

The series’ supernatural elements are no less confusing. No-Ah is either a “novice magician or a “monster magician” (depending on when you ask) who, by the author’s own admission, “gets younger every chapter.” His magical abilities (largely undefined) are in some way related to the infamous Aileru, No-Ah’s childhood friend/bully/other, who is able to do things like turn people into animals and even summon fairies under the right circumstances. Beyond that, the universe’s supernatural ground rules are anyone’s guess.

Not that any of this matters in the slightest. The story’s real magic is in its most ordinary events, as seen through the eyes of its four-legged protagonists. Everything their father-figure does is magical from their perspective, and this “magic” is is a product of unabashed love. While the anthropomorphic appearances of Guru, Nanai, and Rang are undeniably adorable, the real purpose of their portrayal as human children seems to be that No-Ah views them as such. One of the series’ sweetest moments, for instance, is an early chapter in which No-ah teaches his “children” how to bake cookies. While No-Ah’s back is turned, both Rang and Guru mark the dough with their footprints (in blatant disregard of accepted kitchen hygiene). Though Nanai is desperate to join in, canine duty prevails, leaving him with nothing to do but whimper pathetically at the untouched dough before him. Recognizing Nanai’s predicament, No-Ah’s response is to place Nanai’s paws in the dough himself. It’s a small thing, as is nearly everything that happens in this story, but it is exactly this kind of playful affection that makes up the heart of One Fine Day.

Perhaps the series’ most consistently delightful aspect, however, is its artwork. Alternating between crude sketches and elaborate fancies, Sirial’s drawings overflow with warmth and whimsy, matching the story’s tone perfectly. From No-Ah’s comically unmanageable hair to Rang’s footie pajamas, everything that could be labeled as “cute” is also an essential tool for expression, contradicting the series’ haphazard feel.

At its best, One Fine Day is a trippy little stroll through the lives of its mostly-anthropomorphic family and friends. At worst, it is a jumble of incoherent anecdotes that somehow manages to be both visually appealing and intensely heartwarming even in its clumsiest moments. Either way, it’s a bit irresistible.