My Lesbian Experience With Loneliness

After Hours and My Lesbian Experience with Loneliness epitomize a small but growing trend in yuri manga licensing: both focus on women in their twenties exploring their sexuality, rather than depicting middle- or high-school aged girls crushing on each other. 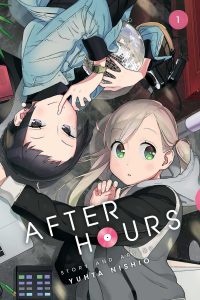 After Hours is the more upbeat of the two, a sympathetic portrait of twenty-three-year-old Emi, a recent college graduate who’s just quit her job and is struggling to figure out what comes next. A chance encounter with Kei, a twenty-nine-year-old deejay, is a turning point in Emi’s young adult life: not only is she drawn to Kei’s confidence, she’s also intrigued by Kei’s passion for spinning records. As their connection deepens, Emi takes a more active role in supporting Kei’s career, joining Kei’s circle of friends and trying her hand at “veejaying,” selecting videos to complement Kei’s set lists.

One of the most striking aspects of After Hours is Yuhta Nishio’s sensitive depiction of Emi and Kei’s sexual encounters. He uses a handful of discrete signifiers — a pile of clothing on the floor, a tender embrace, a flirtatious post-coital chat — rather than explicit or provocative imagery. That’s a wise choice, I think, as it allows Nishio to portray Emi and Kei as grown women with healthy sexual urges without reducing them to sexualized objects. Nishio’s restrained approach also emphasizes the aspects of Emi and Kei’s bodily intimacy that foster a mutual sense of trust, familiarity, and affection — a dimension of sexual experience that’s often missing from straight romance manga.

Though the first chapters are largely uneventful, future volumes promise dramatic complications. Emi has yet to disclose her relationship to her friends or her not-quite-ex-boyfriend, with whom she’s still sharing an apartment. More interestingly, Emi hasn’t really thought about what it means to be in a relationship with another woman; she’s initially surprised by her attraction to Kei, but resists labeling those feelings as lesbian, bisexual, or queer, choosing instead to savor the sense of purpose and joy that being with Kei brings to her life. The ease with which Emi embraces her new love is a refreshing development, a quiet rebuttal of the idea that sexual orientation is absolute or easily defined. 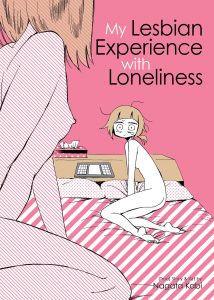 By contrast, Nagata Kabi’s My Lesbian Experience with Loneliness is a more complex story, a confessional comic documenting the author’s sexual awakening in her late twenties. Nagata narrates her odyssey with candor, acknowledging the degree to which mental illness dictated her adult life. She describes the bodily ravages of disordered eating — she vacillated between anoxeria and bulimia — and the emotional toll of disordered thinking, noting the degree to which both depression and body dysmorphia prevented her from holding down a job, maintaining friendships, or thinking about herself as a sexual person. She also ruminates on her chilly relationship with her parents, and her profound sense of shame in disappointing them by not becoming a “real” adult with a conventional office job.

After hitting rock bottom, Nagata realizes the degree to which she’s suppressed her sexuality. In an effort to reassert control over her life, Nagata decides to hire a female escort for her first sexual experience. Nagata documents this encounter in an almost clinical fashion, contrasting her feverish anticipation with her stiff, detached response to being touched. For all of her progress towards mental health and self-acceptance, she realizes that she cannot yet surrender to the bodily sensations of desire — a tension that remains unresolved at the end of her narrative, even though Nagata’s final panels suggest her sense of relief and pride for taking such a bold step.

That Nagata’s journey is more inspiring than depressing is a testament to her writing skills (and, I might add, Jocelyne Allen’s artfully wry translation). Though Nagata never shies away from describing uncomfortable thoughts or self-destructive behavior, she finds moments of grace and humor in even the darkest situations, especially as she begins to contemplate what it means to be a sexual person. In three sharp, economical panels, for example, she explores her profound discomfort with binary gender labels, even as she begins to recognize her sexual attraction to women: 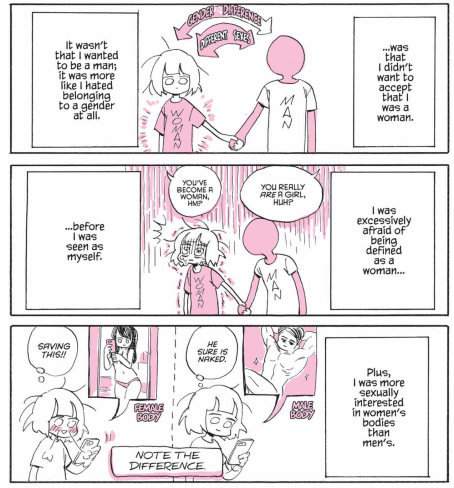 It feels churlish to criticize such a personal work, and yet I found myself wishing that Nagata’s art felt more essential to the story she was telling. Writing for The Comics Journal, critic Katie Skelly voiced similar concerns, arguing that Nagata’s tendency to mix big blocks of text with cute drawings keeps the reader at arm’s length when Nagata discloses intimate, sometimes disturbing, details of her eating disorders and self-mutilation. “Nagata can’t find a suitable bridge to mend the gap between the story of her experience and aesthetic,” Skelly notes. “[H]er style can read as generic and her tone never quite finds its mark.” I admit to feeling the same way about Nagata’s work: I admired her raw honesty, but felt that My Lesbian Experience with Loneliness could have been a book, a movie, or a Moth Radio Hour segment just as easily as a comic; nothing about the way Nagata related her experiences felt like it was uniquely suited to manga, as her drawings were more illustrative of what she felt than genuinely revelatory about why she felt such profound self-loathing.

For all the things that go unsaid in My Lesbian Experience with Loneliness, however, there’s much wisdom in Nagata’s story, especially for people struggling with what it means to be healthy, whole, and sexual. Nagata’s recovery is a testament to the human capacity for resilience, and her willingness to share her most vulnerable moments with strangers an act of genuine courage. Here’s hoping that she continues to document her journey of self-discovery.

VIZ Media provided a complimentary review copy of After Hours.