For two decades, Kosuke Fujishima’s Oh! My Goddess was a veritable institution in the US. It arrived in comic book stores in 1994 and finished its run in 2015, along the way introducing several generations of manga fans to the fraught relationship between the nebbishy Keiichi Morisato and his otherworldly companion Belldandy. Fujishima’s current project Toppu GP debuted last year with little attention from critics, but this sports manga might just be the better of the two series; as I noted in my review of volume one, the characters are types and the drama predictable, but the motorcycle races are thrilling, funny, and surprisingly educational, helping the novice appreciate the skill necessary to ride at an elite level.

The latest installment of Toppu GP does all the things you’d expect the second volume of a sports manga to do: it introduces new rivals for the principal characters, expands the supporting cast, and features several lengthier, riskier races. Not all of these gambits work. Toppu’s new fanclub — which includes Billy Izumo, a tow-headed bike enthusiast, and Itsuki Nagoya, a nerdy girl with a crush on Toppu — provides the weakest sort of comic relief by making Nagoya and Myne compete for Toppu’s attention. (“Who is this old lady?” Nagoya sniffs when introduced to Myne.) When the action shifts to the race track, however, the story roars to life, offering Fujishima a unique opportunity to explain the physics and strategy of moto GP through imaginative visual metaphors. In one sequence, for example, Toppu compares the components of his bike to instruments in a rock band — a neat way to suggest the sound and function of each — while in another, Fujishima represents Toppu’s anxiety as a giant, coiled rattlesnake. These metaphors are corny, to be sure, but they enliven the racing sequences, breaking the relentless stream of speedlines, facial close-ups, and banked turns.

Though Toppu gets top billing, Myne also gets a turn in the spotlight in a fiercely competitive race against Daiya Ishibashi, the reigning champ at the Course 2000. Their race is a genuine nail-biter, with Ishibashi and Myne aggressively vying for the lead. By the end of the volume, it’s not clear if Myne will prevail over Ishibashi, but her tenacity and cunning have made that outcome a real possibility. Readers who want to know whether Myne wins have two choices: wait until August for volume three, or purchase chapters 15 and 16 right now. (The digital serialization is up to chapter 23.) Me? I’m going to tough it out until August, since Toppu GP is one of the few series I’m actively collecting. Recommended.

In a week when The Fate of the Furious is roaring into theaters, it seems only fitting that Kodansha is releasing the first volume of Toppu GP, a manga that extols the virtues of “family values and hot rides” almost as doggedly as Vin Diesel and the rest of his car-boosting gang. The similarities don’t end there, either: both series boast cartoonish villains, pretty girls in skimpy outfits, and dialogue so ham-fisted you could serve it for Easter dinner.

I love them both.

The “family” unit in Toppu GP consists of Toppu, the eleven-year-old hero; Myne, the local motorcycle racing champion; and Teppei, Toppu’s father. Toppu is a classic shonen type: he’s sullen, brilliant, and reluctant to try anything outside of his nerdy comfort zone. (He likes to build elaborate Gundam models.) There are hints, however, that Toppu is destined for the track: he accurately gauges Myne’s qualifying times without benefit of a stopwatch, for example, and instinctually rides to victory in his second race by copying Myne’s technique.

Myne, too, is a familiar type, the sexy “big sister” who squeals and fusses over a smart, promising boy a few years her junior. (Toppu even calls her “Big Sis,” emphasizing the degree to which she’s part of his “family.”) She strides around in a tight-fitting tracksuit dispensing advice and hugs to her protege, goading him to victory with bribes. And just in case we find her more competent than adorable, she suffers from one of those only-in-manga ailments: pathological clumsiness so acute it strains credulity.

The third family member is Teppei, a single parent who’s raising Toppu while writing a novel. Though Teppei professes to be working hard on his book, his actions suggest he’d rather hang out at the track than sit at a typewriter; he spends most of volume one playing coach and mechanic to his kids, dispensing wisdom about the art of motorcycle racing. Dad’s editor must be a forgiving guy.

In contrast to the characters, who are painted in broad strokes, the layouts are executed with thrilling precision. Veteran artist Kosuke Fujishima drops us into the action through deft use of perspective and speedlines, capturing the bikes’ velocity and the riders’ positions, as well as the sheer danger of high-speed maneuvers in close proximity. Fujishima complements these images with a handy primer on G-forces, using an invisible hand to show us what Toppu and Myne feel when they accelerate down a straightaway or bank a sharp turn at high speed: 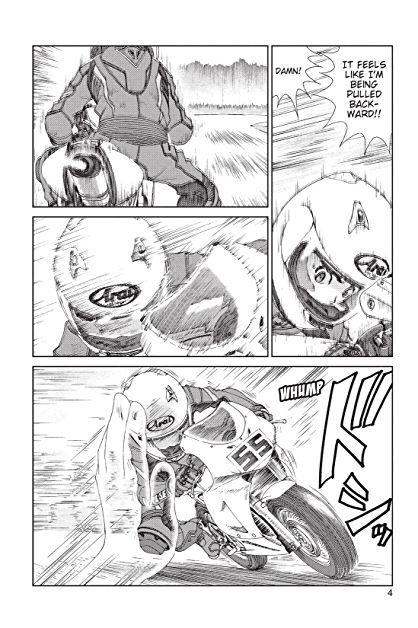 Perhaps the most astonishing aspect of Fujishima’s layouts are their economy. While many shonen artists might be tempted to stretch Toppu’s racing debut over several chapters, Fujishima uses just a handful of panels to show us how Toppu succumbs to the pleasures of competition. This transformation is bookended by two closeups, the first of Toppu’s terrified face as he pulls back on the throttle for the first time, and the second of Toppu’s gleaming eyes as he completes his final lap of the track. We see just enough action between these two panels to grasp the disparity between how quickly the race is unfolding and how slowly time passes for Toppu as he struggles to gain control of the bike, snapping back to “real” time only when Toppu realizes just how much he’s enjoying himself.

In a nod toward gender parity, Fujishima dedicates an entire chapter to showcasing Myne’s tenacity on the track as well. Though Fujishima employs many of the same strategies for immersing us in Myne’s race as he does Toppu’s, Fujishima periodically interrupts the competition with goofy, arresting images of Myne as a tracksuit wearing, sword-wielding avenger and a fiery, Medusa-haired biker. These fleeting visions are a nice bit of comic relief, echoing iconic scenes from Kill Bill and Ghost Rider, but they serve an equally important purpose: showing us how Myne’s rivals see her in competition.

As dazzling as these racing sequences are, I’d be the first to admit that the familial banter between Myne, Toppu, and Teppei feels as perfunctory as the dastardly scheming of the the Niimi brothers, the series’ first villains. (They resent Toppu’s meteoric rise in the standings and want to put him in his place.) The dialogue, too, often veers into the faintly pompous, with characters declaring how much they love “the roar of the exhaust pipe,” “the smell of burning gas and oil,” and “the gaze of the crowd” when they’re at “home.” But when Toppu or Myne jump on their bikes, the series shifts into high gear, offering the same kind of thrills as The Fate of the Furious: fast rides, fierce competition, and the ever-present threat of crashing. Recommended.

A word about buying Toppu GP: Kodansha is simultaneously publishing Toppu GP with the Japanese edition; readers can purchase new installments through Amazon and ComiXology on a weekly basis. Folks who prefer print will find the first volume available in stores now, with volume two to follow in September.