This series was five volumes long, and it feels like exactly the right length to wrap everything up and not leave the readers hanging. It was pleasant enough, but I don’t see myself rereading it anytime soon. Still, this is the first Minami series that I’ve stuck with all the way to the end, so there’s something about cranky pasty chefs that I must find appealing! The last two volumes of the series work through a few barriers to Komomo and Natsu getting together.

This volume shows how Komomo deals with a psychotic girl who has decided to stalk Natsu in a dramatic fashion. Natsu starts ignoring Komomo for her own protection, because he doesn’t want Komomo to become a focus for Noelle’s wrath. Komomo doesn’t deal well with being ignored though, and since Natsu doesn’t openly discuss this problem with her at all (which is standard practice for shoujo heroes) the situation drags on far too long. While Komomo manages to fly under the radar for a little bit, Noelle becomes suspicious of Komomo and Natsu’s relationship and decides to take out her revenge on the Meli-Melo pastry shop. Here, Komomo’s sheer force of will and commanding nature comes out when she decides that she will not stand for Natsu’s livelihood being threatened, and she takes charge in a spectacular fashion, exhibiting some emotional maturity that she wouldn’t have been capable of at the start of the series.

Mitsuru, an old friend of Natsu starts to move in on the story. He’s fascinated with Komomo and figures out that Natsu must be in love with her. However, he has his own secret motivation for becoming involved with the odd pastry-obsessed couple, which is explored more fully in the next volume.

While Komomo starts to realize her feelings for Natsu when she begins to feel jealous of Noelle in the previous volume, the dynamic in the final volume is reversed as Natsu is forced to confront just how precious Komomo is to him once Mitsuru comes charging on the scene. Komomo has a choice to go back to her old life or stay devoted to Meli-Melo, and while her feelings aren’t in question, it takes a bit of time for Natsu to actually acknowledge what the reader has known has been going on since the very first volume.

Komomo Confiserie isn’t the most innovative shoujo manga, but I enjoyed the pastry-themed setting and Komomo’s imperious manner, expressive eyebrows, and occasional fits of rage. I While I don’t see myself rereading this manga anytime soon, it was the first Maki Minami series that I actually read from start to finish. Even though I had a very clear idea where the story would conclude after reading the first volume, I still enjoyed reading the whole series. 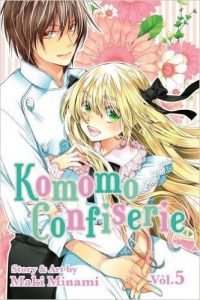 Apologies for missing last week’s deadline – the first week of the semester is always chaotic, and manga reviewing took a back seat to lesson prep. Now that school is underway again, however, the Manga Revue will run weekly on Fridays, as it did this summer.

Flip through The Big Book of Shojo Plotlines, and there – between “I’m Having an Affair with My Homeroom Teacher” and “I’m a Spazz Who’s Inexplicably Irresistible” – you’ll find another time-honored trope: “I Was Mean to My Childhood Friend, and Now He’s Hot!” Komomo Confiserie embodies this plot to a tee: its wealthy heroine, Komomo, was spoiled rotten as a child, with an army of servants at her disposal. It was her special delight to order fellow six-year-old Natsu to make her sweets–he was the pastry’s chef son, after all–and terrorize him when he didn’t comply. When Komomo turns fifteen, however, her family loses everything, forcing her to get a job and attend public school. Natsu–now a successful baker in his own right–makes a seemingly chivalrous offer of employment to Komomo, who’s too guileless to realize that she’s walking into a trap.

You can guess the rest: Natsu revels in his new-found position of power, directing Komomo to perform menial tasks and scolding her for lacking the common sense to sweep floors or boil water. The fact that he’s cute only adds salt to the wound; Komomo vacillates between plotting her escape and speculating that Natsu bullies her out of love.

Whatever pleasure might come from witnessing Komomo’s comeuppance is undermined by the author’s frequent capitulations to shojo formula. Though Natsu frequently declares that bullying Komomo is his privilege – and his alone – he routinely helps her out of jams, bakes her sweets, and behaves a lot like someone who’s harboring a crush on her. Komomo, for her part, behaves like such a twit that it’s hard to root for her; even when she has an epiphany about friendship or hard work, her insights are as shallow as the proverbial cake pan.

The series’ redeeming strength is the artwork. Though Maki Minami frequently resorts to pre-fab backgrounds and Photoshopped elements, she does a fine job of representing the emotional rush that a sugary treat can elicit in even the most jaded adult. Komomo’s food reveries are a swirl of flowers, tears, and lacy doilies that neatly suggest the mixture of joy and sadness she experiences whenever a macaroon or a petit-four stirs up childhood memories. Too bad the rest of the story isn’t as sharply observed.

The verdict: Saccharine plotting and unsympathetic leads spoil this confection.

Reviews: Sean Gaffney and Michelle Smith post a fresh crop of Bookshelf Briefs, while Claire Napier kicks the tires on Ichigo Takano’s ReCollection and Kate O’Neil reminds us why a new installment of Kaze Hikaru is worth the wait. At Contemporary Japanese Literature, Kathryn Hermann posts a glowing review of Yurei: The Japanese Ghost, a collection of essays by manga scholar and translator Zack Davisson.

So far, Maki Minami’s shoujo series haven’t totally connected with me as a reader. I didn’t care for Special A very much, and while I liked the first couple volumes of Voice Over!: Seiyu Academy, I haven’t gone on to read the entire series. Maybe Komomo Confiserie will finally be the Minami series that I actually finish!

The series starts out with a flashback, as the incredibly spoiled and rich little girl Komomo picks on a young boy named Natsu. He’s the son of her family’s chef, and Komomo only likes the sweets that Natsu prepares for her. Komomo is ungracious and bossy, but she has an emotional connection to Natsu’s food, it serving as a substitute for companionship as she lives in a huge mansion abandoned by her parents. In just a few panels, this rich yet emotionally empty life is overturned, as Komomo’s father announces that he’s lost their fortune, and Komomo has to work to support herself with a part time job. Life as a rich heiress hasn’t prepared Komomo with the social graces or work ethic to be able to handle any type of employment and she keeps getting fired over and over again.

It wouldn’t be a shoujo manga if Natsu wasn’t about to return to Japan a triumphant celebrity from studying pastry abroad, determined to seek out his old “friend” to exact revenge, only to find that their positions have been reversed in an ironic twist of fate! Natsu has an exceedingly charming pastry shop to run, and he runs in to Komomo just as she is tossed out into the street from her latest misadventure in employment.

If Komomo was absolutely unrepentant and spoiled, this manga wouldn’t work very well, but what I enjoyed most about this series were the cracks in the facades for both Natsu and Komomo. Komomo gradually begins to realize how superficial her previous life was, when none of her old friends come to her aid. While Natsu initially appears to be slightly psychotic in his pursuit of revenge, he is actually moved a few times when seeing Komomo eat his food and try to adjust to her new life. Komomo’s rich girl attitudes come in handy when she’s faced with a new high school. Mean girl bullying just slides off of her, and she sails through unaffected. Komomo is gradually learning to be a real human being, and as her personality changes, Natsu begins to find her more and more adorable.

Minami is a solid shoujo artist, and I particularly appreciated her being able to dramatize facial expressions that are a bit off, for example when Natsu’s kindness is a facade for his evil plans. I’m hoping that Komomo will become more and more adept with dealing with the real world, changing the power dynamic between her and Natsu more in the next few volumes.