I Hear the Sunspot

I Hear the Sunspot by Yuki Fumino

I Hear the Sunspot was a delightful surprise, and not a title that I expected to see One Peace Books license. For those of you who have been wishing for some slice of life character-driven shounen-ai manga, this title will easily fulfill your manga cravings.

I Hear the Sunspot traces the developing friendship between a couple of college students. Kohei, a student with hearing difficulties who keeps himself isolated from his classmates. Taichi is an outspoken semi-slacker who finds it difficult to keep a full-time job. Taichi is also perpetually hungry. After accidentally stumbling on one of Kohei’s hiding spots, Taichi finds himself gifted with Kohei’s lunch after staring at it with hungry eyes. The entire exchange is wordless on Kohei’s part and Taichi checks up on him with other students afterwards, finding out that Kohei needs volunteer note takers in order to support his studies.

One of the things I liked so much about this series was Fumino’s art. She has a great facility with facial expressions, where Taichi’s open, smiling mannerisms contrast with Kohei’s carefully cultivated almost expressionless looks as he is repeatedly confronted by someone who isn’t going to take “No” for an answer in his attempts at friendship. Taichi turns out to be a less than stellar note taker due to his habits of falling asleep or zoning out in class, but Kohei pays him for his efforts by bringing him extraordinarily delicious lunches. Kohei gradually begins to open up more thanks to Taichi’s efforts to include him in regular school activities, and the slice of life school stories mixed with small scenes showing the depth of this new friendship made I Hear the Sunspot a pleasure to read.

One of my favorite moments in the book was when Taichi finds himself in conversation with a girl who asks about Kohei in a really intrusive way, clearly indicating that she is invested in the idea of herself acting benevolent to a person with a disability. Taichi gets angry, and his reaction is just on the edge of being a little too upset, to the point where I started to wonder if he was romantically jealous in addition to wanting to protect his new friend. Character driven moments like this are why I Hear the Sunspot is now one of my favorite manga of the past year. I’m happy to hear that One Peace Books is also picking up at least one of the sequel volumes, and I’m so curious to find out what happens next in this slowly developing romance. 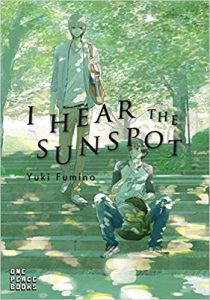