I’m a little worried about Shojo Beat’s list of titles now, because with both My Love Story!! and Honey So Sweet ending, it seems to be like there is a slight lack of super adorable manga currently being published. I’m sure something else will come along soon to full fans’ need for low conflict shoujo where everyone is genuinely nice to each other, but in the meantime I might have to get that extra warm and fuzzy feeling by rereading older series instead of from new manga.

This final volume focused on the characters’ all getting their lives together as Nao and Taiga start to approach the end of high school. In particular, Nao’s uncle Sou finally has a chance at a life outside of being a parent, as a long-lost love from his past suddenly reappears in his life. Sou has put aside his own feelings to a degree, with all of his efforts focused on Nao’s happiness. Nao is determined to demonstrate that she’s capable of being more self-sufficient, with the goal of encouraging Sou to move on. She has some predictably funny mishaps in her first attempts at household management.

In the end, Taiga’s usual blunt nature and heartfelt feelings cut to the heart of the matter in a conversation with Sou. Sou might find a way to move on as the young couple enters adulthood together. There’s a predictably happy ending, and a bonus story in the back of the manga that shows the first, one-shot version of the story. Overall, while Honey So Sweet might not be the most challenging manga to read, the whimsical illustrations and gentle pacing of the plot in each volume made it a perfect stress relieving manga. It is difficult to feel cynical about the world when reading Honey So Sweet, and that’s the main reason why I enjoyed this series so much. 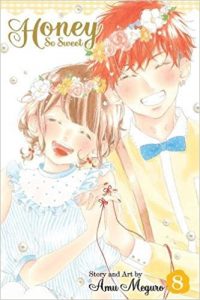 Between My Love Story!! and Honey So Sweet, English manga readers certainly have some stellar current shoujo series that are standouts for being adorable and benign. I was struck by just how Nice with a capital N Honey So Sweet is with the seventh volume’s take on a typical shoujo plot of the girl who gets a crush on main girls boyfriend and attempts to drive a wedge between them.

Miyabe has a crush on Taiga, and she proceeds to pursue him in the relentless and clueless way that only someone in the grips of first love is capable of. She shows up when Nao and Taiga are about to share some precious time alone, and she even starts trying to copy Nao’s hairstyle and outfits in an attempt to get Taiga’s attention. Nao at first doesn’t bring up her own feelings of jealousy, because she’s afraid of being viewed as petty and selfish. But she eventually realizes that it is much better to be honest. Taiga is fairly clueless about what Miyabe is up to for far too long and things start getting out of hand. It is heartwarming to see Futami trying to intervene to distract Miyabe from her poorly executed boyfriend stealing plan.

As the ineffective boyfriend stealer, Miyabe ends up getting treated with a great amount of compassion when all her strategies don’t end up working out. A marginal character in a situation who would serve as a distraction or be quickly forgotten in a less benign manga ends up having her feelings and friendship acknowledged. There’s something so human and hopeful about Honey So Sweet, it is the perfect manga to read if you need something to offset any cynicism you may be feeling. 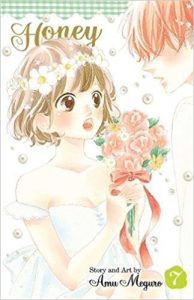 Kicking off the week of Valentine’s Day by reading some shoujo manga seemed like a good idea! Honey So Sweet and My Love Story!! are some of the most adorable and cute manga currently being published. Both couples in this series are in more established relationships, so it is interesting to see how the series continue to develop these romances.

Christmas dates are a staple plot element in shoujo manga. In this case Nao and Taiga plan on getting together, but their solo date plans are quickly derailed when their entire group of friends decides that a Christmas party is happening. While everyone does have fun, it turns out that Futami decides to employ some social pressure to make sure that Nao and Taiga get some alone time. Hence, a scene of fierce blushing as the young couple is painfully aware that they are at last alone with each other. Other than blushes and some hand holding, nothing happens because Taiga’s mom suddenly returns home and embarks on a fierce examination of her son’s new girlfriend.

The artwork shifts from the general wispy and feminine style Meguro usually employs into some panels with dark screentone and bold fierce lettering as Taiga’s mom demands that the couple break up. Aggressive mothers are no match for Nao’s earnestness, as she proclaims that she loves Taiga and is determined to stay in the relationship. They then bond over Taiga’s embarrassing childhood photo albums. Nao also has to repair her relationship with her uncle and guardian Sou after accidentally staying out all night. While Sou denies being angry while acting passive aggressive and Nao decides that she’ll avoid the situation as much as she can, it takes a moment of insight and extraordinary emotional intelligence from Taiga for things to get back to normal.

A shoujo series that only focuses on the main couple gets boring fast, which is why this volume emphasizing relationships with parents or parent-like figures along with the regular romance ensures that the series as a whole continues to be entertaining.

My Love Story!! Volume 11 by Kazune Kawahara and Aruko

First of all, the skewed Sleeping Beauty illustration on this volume is hilarious. This is one of my favorite shoujo manga currently being translated just because it raises the bar so much for any series attempting to be both sweet and hilarious at the same time. At this point, Takeo and Rinko haven’t seen each other very much, but they are about to be thrown in close proximity due to some coinciding class trips.

Takeo is freaking out about his ability to control his romantic urges, while Rinko keeps not so innocently popping up in his personal space. As always in My Love Story!! there’s plenty of comedic tension but the couple ends up talking things through to smooth over any awkwardness. The next story in this volume focuses on a scenario where Takeo and Rinko try to learn more about each other’s hobbies. Takeo attempts to make pancakes with results that end up carbonized while Rinko starts running around to boxing gyms because she wants to learn how to do feats of strength. Takeo ends up training her in tumbling techniques, and the scenes showing his intensity with constant frowning and fire burning in the background and her determined attempts to be a good student are fun to read. I always put this manga down feeling like I’m in a better mood, and what more could someone want out of some leisure reading? 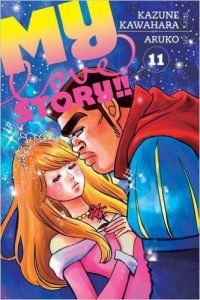 I always look forward to checking out new Shojo Beat series, but I was wondering before I picked up this title if it would be a bit TOO sweet. Once the characters and backstory got set up, I enjoyed this volume.

The volume opens up with a flashback scene of Nao Kogure walking away from a boy recovering from a beating in the rain, saying that people might consider her helpless, but she doesn’t want to get involved with delinquents. The delinquent in question is Taiga Onise, nicknamed Oni at his school. He promptly announces to Nao that they need to talk, and when she follows him he presents her with a bouquet of roses and asks her if she’ll “date him with marriage in mind.” Nao is so intimidated by her suitor that she accepts immediately because she’s afraid of retaliation.

Nao discusses the situation at home with her guardian, her Uncle Sou. He points out that judging Onise by his outward appearance is unfair and she should get to know him first. The next day at school she sees Onise doing chores, helping teachers, and he makes an incredibly cute bento for them to share at lunch. One of the most annoying thing about this manga in the early chapters was Nao’s fear of Onise, long after the point where it should be clear to everybody that dyed hair and random piercings aside, he’s an absolute sweetheart. The other thing that has Nao hesitating about getting involved with her first boyfriend is that she’s decided she’s in love with her Uncle.

Nao and Onise continue their friendship, and one of the things I enjoyed very much about this series were cute details that showcase their personalities, like Onise’s tendency to write elaborately formal text messages when he’s nervous. Nao has her own trauma to deal with due to being an orphan, and she finds it difficult to get close to people. Much of the plot centers around some typical shoujo set pieces like a class trip, but Nao and Onise gradually start collecting a small group of misfit friends, and the series is so genuinely warm-hearted, it is hard to resist.

I found myself enjoying Meguro’s art style very much. So much shoujo manga art tends to be overly polished, but Meguro uses thin whispy lines that make the illustrations in Honey So Sweet seem delicate and not overworked. The storylines centered on friendship, combined with Nao’s psychological issues reminded me a bit of some of the old Banri Hidaka series published by CMX. This first volume was mostly set-up, so I’m curious to find out what happens next in this series. 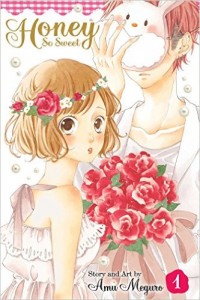