Today’s reviews come to you courtesy of Patriot’s Day, my second favorite Massachusetts-only holiday. (The first is Evacuation Day, a thinly-disguised attempt to give Boston’s civil servants permission to skip work on St. Paddy’s.) For your consideration are volume four of D&D cooking extravaganza Delicious in Dungeon, and volumes three and four of everyone’s favorite backwoods culinary adventure Golden Kamuy. Looking back on food manga’s early history in the US, who could have predicted that readers would be feasting on such a wide array of titles in 2018, from Sweetness and Lightning and What Did You Eat Yesterday? to Giant Spider & Me: A Post-Apocalyptic Tale, Food Wars!! Shokugeki no Soma, and Toriko. Maybe the North American market is finally ready for an Iron Wok Jan renaissance… 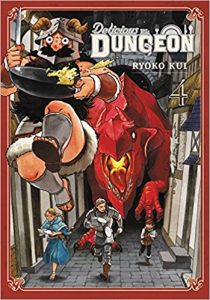 If the first volume of Delicious in Dungeon was about assembling a posse, and the second and third about turning monsters into meals, then the fourth is about friendship — specifically, the strong emotional bond between Laois, Marcille, and Falin — and revenge, as the gang finally comes face-to-face with the Red Dragon. The showdown takes place inside a walled city whose narrow, maze-like streets give them a strategic advantage over their Godzilla-sized foe. And as exciting as the fight is, the real payoff is what follows, as Laois and Marcille discover that bringing Falin back from the dead isn’t a simple proposition. It’s in these moments that Ryoko Kui proves a more deft storyteller than we initially realized, effortlessly shifting gears from comedy to drama without mawkishness or cheap jokes. Instead, we’re allowed to contemplate the real horror of being eaten alive — as Falin was — and the real possibility of a character dying for good.

If I’ve made volume four sound like a bummer, rest assured it isn’t. Seshi gets his turn in the spotlight with a weaponized assortment of kitchen tools, while the rest of the gang endures its share of fumbles and miscommunications on the way to catching their dragon adversary. Though I suspect the next volume of Delicious in Dungeon will revert to a monster-of-the-week formula, that’s OK; Kui has firmly established her dramatic and culinary bonafides in volume four, leaving the door open for more character development in the future. Recommended. 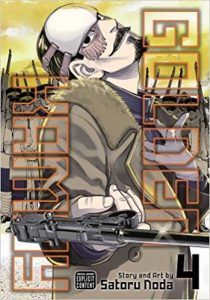 Midway through volume four of Golden Kamuy, Asirpa builds a fox trap in the woods. “Do foxes taste good?” Sugimoto inquires. “No, not really,” Asirpa replies. “Tanuki have more fat in them and taste a lot better.” With a twinkle in her eye, she then asks, “But Sugimoto, don’t you want to try eating a fox?” A mildly exasperated Sugimoto replies, “You know, I’m not out here to try all the delicacies in Hokkaido.”

There are two ways to read this exchange: as a tacit admission that the cooking elements of Golden Kamuy sometimes occupy more real estate than the battles, or a tacit admission that the series is more compelling as a study of Ainu culture than a bloody frontier adventure. I vote for the second interpretation, as the series’ frequent detours into the food, medicine, and mythology of the Ainu are fascinating, offering a window into a culture that has been largely hidden from Western view. Golden Kamuy is on weaker footing, however, when focusing on its secondary characters and subplots. None of the other gold-seekers are fleshed out as carefully as Asirpa and Sugimoto, despite Satoru Noda’s efforts to give each villain a unique motivation for wanting the treasure. The newest baddie — Kazuo Hemni — exemplifies this problem to a tee: though he’s been given a particularly grisly backstory to explain his murderous proclivities, he’s such a textbook sociopath that he barely rises above the preternaturally-calm-and-savage type.

The art, too, sometimes has a perfunctory quality; in several scenes, Noda’s use of a Photoshopped background doesn’t mesh well with the hand-drawn elements, resulting in an awkward collage. Noda’s use of perspective can also be a distraction. He has difficulty drawing bodies to scale, especially when he’s depicting Asirpa and her family, some of whom look more like Smurfs than people in their head-to-body ratio.

Still, the camaraderie between Asirpa and Sugimoto, and the well-staged action scenes more than compensate for the occasional roughness of the execution or flatness of the characterizations. Golden Kamuy continues to entertain, horrify, and educate in equal measure — something I can’t say for any other manly-man manga that’s currently being published in English. Recommended.

Last week at Experiments in Manga I posted the most recent monthly giveaway. This time around participants have the opportunity to win both the first volume of Seiju Natsumegu’s Ghost Diary and the first volume of Chasiba Katase’s In/Spectre, two of the more recent manga series debuting in English translation that deal with Japanese folklore and legends. The winner of the giveaway will be announced on Wednesday, so there’s still time to enter the contest. And as usual, the giveaway is open worldwide. Last month I switched around my posting schedule a little bit, but July will go back to the usual order. Unless something unexpected comes up, next week’s feature will be a Bookshelf Overload and the following week’s will be an in-depth review of Tomoyuki Hoshino’s award-winning novel ME. I’m currently reading and greatly enjoying an advance copy of Kazuki Sakuraba’s A Small Charred Face, scheduled to be released by Haikasoru later this year, so expect an in-depth review of that in the near future as well.

As for other interesting things that I’ve recently come across online to read and listen to: Ollie Barder interviewed the creative team Akira Himekawa for Forbes and Casey Lee Mitchem had the the chance to ask Hirohiko Araki a few questions for Anime News Network. As announced by Publishers Weekly, Chris Butcher, one of the main driving forces behind the Toronto Comic Arts Festival, is now also an editor-at-large for Viz Media. (This should turn out to be a very good thing.) I’d actually forgotten that Publishers Weekly has a podcast called More to Come, but one of the most recent episodes focused on Legend of the Galactic Heroes. Some other recent podcasts of note include one of Wave Motion Cannon’s weekly podcasts which featured Gengoroh Tagame’s My Brother’s Husband and Kabi Nagata’s My Lesbian Experience with Loneliness as well as an episode of Manga Machination’s which also featured My Lesbian Experience with Loneliness along with the manga’s translator Jocelyne Allen as a special guest. And of course, The OASG’s Translator Tea Time podcast is still going strong, too.

Anime Expo started last week and as usual there have been plenty of new licenses and announcements to come out of the event. First of all, Netcomics debuted its most recent print release, Dreams of the Days by Kyungha Yi the creator of Intense. Viz Media announced a handful of things, inculding the manga series Fire Punch by Tatsuki Fujimoto, a fancy new hardcover edition of Hiromu Arakawa’s manga Fullmetal Alchemist, the Kenka Bancho Otome: Girl Beats Boys manga series by Chie Shimada, two Neko Atsume: Kitty Collector books–Haiku and Where Am I Meow?–and Dempow Torishima’s award-winning collection of short stories Sisyphean (which is closely related to Torishima’s award-winning and incredibly strange illustrated novella Sisyphean which was previously translated in the speculative fiction anthology Phantasm Japan).

Yen Press also made a number of announcements including but not limited to the following manga titles in print: Baccano! by Shinta Fujimoto, The Demon Who Became My Sister by Pochi Iida, Hatsu*Haru by Shizuki Fujisawa, Kemono Friends: Welcome to Japari Park by Furai, Is It Wrong to Try to Pick Up Girls in a Dungeon?: Days of Goddess by Masaya Takamura, Mermaid Boys by Yomi Sarachi, Oh, My Sweet Alien by Kōji Miyata, Pandora Box–a deluxe, limited edition box set of Pandora Hearts by Jun Mochizuki–Sacrificial Princess and the King of Beasts by Yu Tomofuji, Silver Spoon by Hiromu Arakawa (I am extremely excited about this announcement!!!), Stupid Love Comedy by Shushushu Sakurai, Tales of Wedding Rings by Maybe, and Zo-Zo-Zombie-kun by Yasunari Nagatoshi. 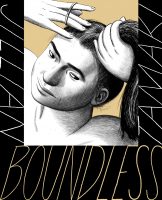 Boundless by Jillian Tamaki. I’ve read several of Tamaki’s comics over the years, including her collaborations with her cousin Mariko Tamaki. SuperMutant Magic Academy, one of Tamaki’s solo works, is a personal favorite of mine and so I was especially looking forward to the release of Boundless, a collection of nine of Tamaki’s short comics (eleven if you count one of the end pages and the back cover). Most of the comics collected had previously been released elsewhere, either online or in print, however there is newly-published content included in the volume as well. I had already read some of the selections before (and actually even own one of them), but reading them together provides a more immediate and interesting contrast between the works. None of the comics are directly related to each other and even Tamaki’s color palettes, illustration styles, and methods of storytelling change throughout the volume, but they all have a well-defined, emotional core. While some of the comics in Boundless are fairly straightforward,  at times Tamaki’s approach is rather experimental. Overall, Boundless is a beautiful collection of comics exploring contemporary life, showing how talented and versatile a creator Tamaki can be.

Golden Kamuy, Volume 1 by Satoru Noda. The manga wasn’t on my radar until Viz Media announced that it had licensed the series, but as soon as I learned about Golden Kamuy I knew that I needed to check it out. The majority of series takes place in the early twentieth century soon after the end of the Russo-Japanese War. Saichi Sugimoto is a veteran of the war carrying the nickname of “Immortal” since he somehow managed to famously survive numerous battles and injuries that otherwise really should have left him dead. Instead of returning home a hero, Sugimoto is now living in the wilds of Hokkaido searching rather unsuccessfully for gold. But then he happens across a bizarre story that seems to be more than just a rumor–a massive amount of wealth was stolen from the indigenous Ainu people and hidden, its location secretly recorded in a code tattooed onto the bodies of convicted criminals. In addition to Sugimoto, the other lead character of Golden Kamuy is Asirpa, an Ainu girl who surprisingly agrees to aid him in his search. Despite being Sugimoto being “immortal” she proves to be critical to his survival, teaching him how to face off against bears and hunt for food among other things. It can be gruesome and violent, but I enjoyed the beginning of Golden Kamuy a great deal.

The Royal Tutor, Volume 1 by Higasa Akai. When Yen Press first released The Royal Tutor, the manga was a digital-only title. The series interested me, but I don’t usually read or buy ebooks, so I was very happy when it did well enough to warrant a physical release. (The recent anime adaptation probably helped matters some, too.) The kingdom of Granzreich has five princes, the first of whom is destined to inherit the throne. However, the other four must be ready to take his place should they need to, which is where the new royal tutor Heine comes in. The first volume of The Royal Tutor is often very silly, especially when it comes to the running gags about Heine’s small, childlike stature, but at its core is an story about an ideal teacher–someone who is willing to engage, work with, and inspire students wherever they’re at and on their own terms. By the end of the first volume Heine has already made a tremendous amount of progress in winning the princes over which leads me to wonder how much room is left for the manga to continue to develop. Currently though, the series is eight volumes long and still ongoing, so Akai must have found a way to keep the story and characters fresh and interesting. If nothing else, the hints that Heine and his background aren’t everything that they appear to be is something left to be explored.