One of the highlights of my August visit to Québec City was the Hergé à Québec exhibition at the Musée de la civilisation. The show, which has already made stops in Paris, Geneva, and London, offers a retrospective on the life and work of Georges Prosper Remi (1907 – 1983), better known to children around the world as Hergé, creator of Tintin, intrepid boy reporter, and Snowy, his sardonic canine companion.

Hergé à Québec spans Remi’s entire career, from his first childhood drawings to his late-in-life brush with contemporary art. As a means of introducing Hergé to visitors, the show begins with a gallery of items culled from his formative years, including a comic drawn when he was a sixteen-year-old Boy Scout. This room is followed by a sequence of exhibits exploring three seminal Tintin stories, Tintin in the Land of the Soviets (1930), The Blue Lotus (1932) and Cigars of the Pharoah (1934). Through a series of well-chosen projections, photographs, and pages, the curators define Hergé’s ligne claire (clear line) style, and state the main thesis of the show: that Tintin teaches young readers about the world through his adventures — in which Tintin is subject to the slings and arrows of fortune as he travels through foreign lands — and missions — in which he pursues a specific objective, such as finding a lost object. This idea is further developed in later galleries, culminating in a charming display of pages from and items associated with Tintin’s two lunar adventures: Destination Moon (1953) and Explorers on the Moon (1954).

The show also includes a gallery featuring commercial posters designed by his production company l’Atelier Hergé-Publicité. These advertisements, rendered in a bold, colorful style reminiscent of Cassandre’s, urge consumers to fly Sabena Airlines, read Le Vingtième Siècle, and buy Parein biscuits. As playful and striking as many of these images are, the inclusion of one toy company’s poster — an image of a thick-lipped African child holding an umbrella — points to one of the exhibition’s main flaws: it misses the opportunity to address Hergé’s racist depictions of colonized people in a historically responsible fashion.

A selection of posters produced by l’Atelier Hergé-Publicité.

In tracing the development of Hergé’s storytelling from Tintin in the Land of the Soviets to The Blue Lotus, the show only tacitly acknowledges the two works that fell between them: Tintin in the Congo (1931) and Tintin in America (1932). Instead, the curators focus on Hergé’s relationship with Chinese artist Zhang Chongren, whom Hergé befriended shortly before writing The Blue Lotus. Through his interactions with Zhang, they argue, Hergé learned the importance of researching the places Tintin visited, rather than defaulting to popular stereotypes about their peoples. And while the discussion of Hergé and Zhang’s friendship offers evidence that Hergé was capable of taking a more nuanced view of other cultures, the show never examines Hergé’s paternalistic view of Belgium’s African subjects, an issue that’s explicitly addressed in both Benoit Peeters’ Hergé: Son of Tintin and Pierre Assouline’s Hergé, The Man Who Created Tintin.

The exhibition does a better job of addressing Hergé’s stint at Le Soir (1939-1944), the official newspaper of occupied Belgium. After the war, Hergé was arrested four times on suspicion of collaborating with the Nazi regime — charges that almost cost him his citizenship. To the curators’ credit, the show includes a brief video interview with Hergé about this episode in his life. By acknowledging his involvement with Le Soir in such a neutral fashion, however, the show misses another opportunity to present a more nuanced picture of Hergé’s political beliefs, warts and all.

Where the show excels is in its ability to immerse the visitor in Hergé’s creative process, from crude storyboards — with cross-outs, arrows, and editorial notes — to published work. Throughout the exhibition, there are numerous pairings of early drafts with finished products, allowing the viewer to trace the development of characters and scenes from concept to completion. The galleries also include several side-by-side comparisons of objects with the images they inspired, most notably in Tintin and the Broken Ear (1937). Although some of these pages are presented in their final form, with word balloons and dialogue, many are not. This decision allows the visitor to more fully appreciate the role of Hergé’s line work and colorful palette in creating Tintin’s world — without the mediating influence of text.

The exhibition also makes a strong case that Hergé deserves serious consideration as both an art collector and painter. The final gallery juxtaposes Hergé’s acquisitions — including Roy Lichtenstein’s Rouen Cathedral (1967) — with his own original canvases. And as fascinating as it was to contemplate Hergé’s taste in art, I found the modernist work that he produced under the tutelage of Belgian painter Louis Van Lint (1909-1986) more striking than the work he’d collected. His own paintings demonstrate strong affinities with Joan Miró and Marc Chagall, but also demonstrate strong affinities with his cartooning, as evidenced by his careful delineation of space and strong sense of color. 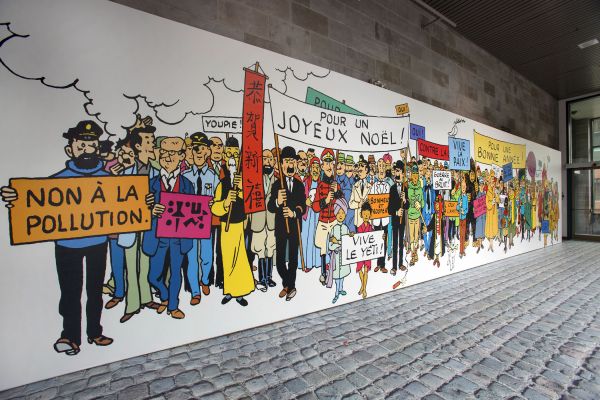 This 1973 mural greets visitors to the Musée de la civilisation.

It’s a shame that the curators didn’t explore Hergé’s life with the same zeal; doing so would have provided valuable context for understanding him as a product of a specific place and time, immersed in ideas that shaped the characters he created and the stories he told. Yet for all the show’s limitations, Hergé à Québec gave me new insight into Hergé’s evolution as an artist and storyteller, and a deeper appreciation of his craft. For an artist’s perspective on Hergé à Québec, see Ben Towle’s thoughtful evaluation of the exhibit.

Hergé à Québec is on display at the Musée de la civilisation in Quebec City through October 22nd. For information and tickets, click here. Note that the show is not included in the general admission price to the museum.

Last weekend, I had an opportunity to visit the San Francisco Public Library, which is mounting a small but meticulously curated exhibit exploring the relationship between politics, censorship, and manhwa in post-war Korea. Called “Korean Comics: A Society Through Small Frames,” the exhibit features twenty-one of Korea’s best-known cartoonists, from Kim Won Bin, creator of Fist Boss, to Hwang Mina, a sunjong (girls’) pioneer. For a Western reader whose primary knowledge of manhwa comes from titles such as Goong: The Royal Palace, the exhibit will be revelatory, as almost none of the series on display look like the Korean comics that have been licensed for the US market; if anything, the curators have gone out of their way to choose titles that challenge the commonly-held Western notion that manhwa is simply the “Korean form” of manga.[1] Styles range from the cartoonish (Baby Dinosaur Tuli, Madame Vicious) to the  naturalistic (The Picture Diary of Puja), while the story lines explore topics as varied as ancient Korean history (Kojudo: Three Kingdoms), homelessness in Seoul (We Saw a Pity Bird Who Lost Its Way), Korean involvement in the Vietnam War (Yellow Bullets), and sumo champion Rikidozan, who is credited with introducing Japanese and Korean audiences to modern professional wrestling.[2]

Throughout the exhibit, curators have gone to great pains to illustrate the complex relationship between cartoonists and the Korean government, noting when a particular title elicited criticism from officials or earned praise for its depiction of Korean life. Visitors unfamiliar with recent Korean history may be surprised to discover the degree to which propaganda and censorship shaped the development of manhwa in South Korea. Hwang Mina’s We Saw a Pity Bird, for example, caused a stir when Seoul was preparing to host the 1986 Pan-Asian Games; the government attempted to ban the work for depicting poverty and homelessness in urban settings, fearing that Pity Bird would make South Korea look economically backwards. Other works, such as Kim Seong Hwan’s Koban, a long-running newspaper strip, ran afoul of Park Chung Hee’s censors for depicting student unrest and changing social mores in the 1960s.[3]

Not surprisingly, the exhibit’s most dramatic illustration of the relationship between comics and politics comes from North Korea. The Great General Mighty Wing debuted in 1994, shortly after Kim Jong Il succeeded his father. Like Soviet novels of the 1920s and 1930s, and Chinese model operas of the 1960s, The Great General Mighty Wing is intended both as entertainment and education, employing a popular medium to teach Communist values, assert the importance of the collective, and reassure readers of their leader’s benign, parental authority. Using the metaphors of the garden and the hive (both Communist staples), the story depicts a conflict between honeybees and wasps for control of two vital resources: water and flowers. The full-color artwork is a synthesis of mid-1950s Korean and Japanese styles (Fist Boss is cited as one important influence), while the script is pure agit-prop, with characters speaking in Communist slogans and heroic, selfless pronouncements.

One of the subtler affects of censorship — artistic isolation and stagnation — is addressed briefly but effectively in the few examples of sunjong manhwa on display. Korea experienced a brief shojo manga boom in the 1970s, when pirates flooded the Korean market with unauthorized versions of popular Japanese titles. The Magnificent 49ers’s style, in particular, had a profound influence on artists writing for the girls’ market. After the government cracked down on Japanese imports, however, Korean artists who had drawn inspiration from the 49ers no longer had access to current shojo manga; as a result, variations on the starry-eyed heroines and long-haired princes of The Rose of Versailles flourished in Korean manhwa long after they’d fallen out of fashion in Japan.[4]

If I had one complaint about the exhibit, it’s that visitors whose entire knowledge of Korea is rooted in the present may not appreciate the degree to which the displayed comics reflect the social and political upheaval of the past eighty years. A small timeline of major events, or even a pamphlet providing a brief overview of Korean history from 1939 to the present, would have been a valuable asset to the exhibit. (A quick glance at the Wikipedia articles on Korea, North Korea, and South Korea are strongly suggested if you don’t know much about the region.) That said, “Korean Comics” is a thoughtful and thought-provoking show that will challenge readers’ notions of what manhwa is, offer them a window into Korean society during some of its most turbulent periods, and introduce them to twenty-one brilliant artists, all of whom deserve greater recognition outside their home country.

Manhwa 100: The New Era for Korean Comics. NETCOMICS (2008). Available through Amazon and other retailers.

1.This disparity is reflected in the library’s suggested reading list, which features a number of contemporary works such as The Antique Gift Shop, Honey Mustard, Moon Boy, and Priest but none of the works feature in the show. The SFPL’s collection does include a few Korean-language titles, which are listed in the bibliography.

2. Rikidozan is mentioned in Yoshihiro Tatsumi’s A Drifting Life (2009; Drawn & Quarterly), in which Rikidozan is presented as a Japanese hero for defeating American wrestlers in the ring. See pages 261-63.

4. NETCOMICS, a Korean publisher which has been translating manhwa for the American market, has released a number of sunjong titles from the 1980s and early 1990s that suggest the continued influence of 1970s shojo styles on Korean artists. The early work of Kyungok Kang provides an instructive example. See In the Starlight and Narration of Love at 17 for two such examples; her later work, such as Two Will Come, has a distinctly different look.