As the student/teacher romance in Daytime Shooting Star progresses I find myself thinking, “Oh, that’s cute” and “Stop being so inappropriate Shishio!” very often and simultaneously. Most of this volume is taken up with the old shoujo staple of a school festival. It is the perfect opportunity to shake things up as teens run cafes, put on plays, and engage in high stakes emotions. Mamura in particular is popular as a mostly silent butler at the cafe. Suzume does her best to serve coffee but she’s flustered when Mr. Shishio shows up and sits in her section, accompanied by her uncle. Mamura is in full protective mode, making a comment to Shishio that “A teacher has no business seducing his students” before being distracted by his own family showing up at school. Mr. Shishio confronts Mamura later on, and when Mamura acts cold to Suzume afterwards, she gets annoyed. While all the drama is happening in the cafe, Nekota has to pull herself together to be Juliet after being rejected by Mamura. Her Romeo is the popular and seemingly superficial Togyu, but he’s actually surprisingly insightful. 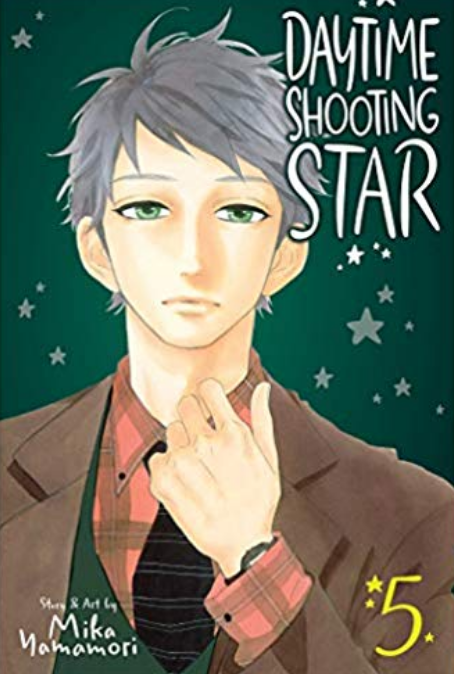 Suzume is somewhat oblivious to all the drama surrounding her, but she’s feeling awkward about going to see Nekota’s play solo. Shishio shows up in a mascot costume so he can take her to watch the play which is somewhat endearing but also a little creepy. After putting on the brakes for so long, Shishio admits that he has feelings for Suzume, and she’s absolutely stunned. The rest of the volume deals with the aftermath of the emotional revelations from the school festival, as Nekota tries to move on and Suzume decides to work part time in her uncle’s cafe in order to save up to buy Shishio a birthday present. Showing characters navigating through daily life while dealing with plenty of emotions is one of the things that Daytime Shooting Star is good at, along with the consistently stylish art. We aren’t quite halfway through the series yet, but I’m firmly on team Mamura now. Go Mamura! I’m still enjoying this series, mainly because Suzume and Nekota are so oddly sympathetic, but reading it is also balanced out with the tension that comes with reading a romance manga that is going all in on an inappropriate relationship, making me wonder when all the quasi-romance is going to cause some severe negative consequences for all the characters.

This volume of Daytime Shooting Star is focused on summer vacation. I really like the way the matte cover sets off the powdery pink blossoms used in the cover illustration for this volume. I’m so curious as to how this student-teacher romance manga will conclude, I’m guessing a giant time skip picking up with the high school characters post-college graduation. The volume opens as Suzume uses her intense knowledge of fish and extra cash to help out a strange but somewhat familiar man in the grocery store who has difficulty both shopping for seafood and remembering his wallet. When she drops by his house to get repaid for his groceries, she realizes that he’s Mamura’s father! Suzume gets a glimpse of Mamura’s very loud little brother, and she and Mamura are able to talk to each other again like friends. 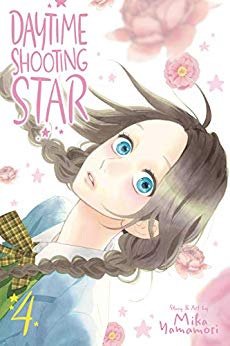 Tsubomi ends up blowing out of town leaving a tornado of emotional devastation in her wake, as she seems to think it is appropriate to leave a note for her ex-boyfriend Shishio with the teenage girl who has a crush on him. Susume can’t resist the impulse to deliver it, and when she meets Shishio again, they decide to go on a group outing with her classmates to the aquarium, since Tsubomi enclosed an aquarium gift certificate. Of course, the day of the outing no-one else shows up, so the student and teacher are on a full-on solo date where Suzume gets to indulge in all the fish trivia questions she has ever dreamed of. Shishio continues to be fairly inappropriate but not doing anything physical beyond resting his head on Suzume’s shoulder. Even though he rejected Suzume’s love confession, it is clear that he’s still looking out for Suzume at school and in general acting protective and awkward at various moments. Suzume sees all this happening and becomes confused yet again. Fortunately there’s the school festival coming up that will provide a welcome distraction from all these romantic foibles, or amp everything up even more?

I continue to enjoy Yamamori’s stylish character designs. Suzume’s moments of introspection and insight as she’s attempting to get a handle on the world around her keeps Daytime Shooting Star interesting. It is easy to see how she’ll eventually grow up to be a formidable adult.

I’m still enjoying this manga that focuses on the subgenre of teacher-student romance, even though I think the teacher in question has terrible boundaries and the only way for this story to end happily is for Suzume to actually date someone her own age. Perhaps an elaborate time jump where Suzume and Mr. Shishio get together after she has completed college and done a stint in the Peace Corps would also work. 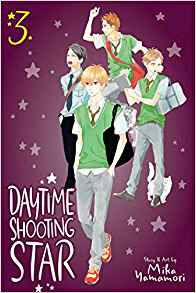 I was trying to pinpoint why I like this series so much when other Shojo Beat series are more seriously tackling the nature of grief (Ao Haru Ride) or delving into teenage introspection while juggling a love triangle (Shortcake Cake), and I came to the conclusion that for some reason I’m more affected by the art in Daytime Shooting Star. There’s something whimsical about the way that Yamamori designs her characters that just causes me to find practically everyone in the manga adorable and sympathetic.

Suzume deals with an onslaught of emotions as she confesses her feelings to Mr. Shishio when he is asleep, only to realize that he was actually awake. She endures a torrent of teenage embarrassment, and her emotional state isn’t helped all that much when Shishio’s super cool ex-girlfriend starts hanging around again. While Suzume starts researching hypnosis to discover if she will be able to erase someone’s memories, she is able to process her feelings more by talking to Nekota. Suzume decides to get things out into the open with Mr. Shishio, but then ends up running into Mamura who clearly still likes her. Will Suzume’s role as the one girl who Mamura doesn’t seem to be allergic to lead to a new, more age appropriate romance? Both the teenagers and youngish adults in Daytime Shooting Star all seem to be dealing with their own emotional issues due to a variety of reasons, and it is interesting to see Suzume evolve and take charge of her life, even though she’s aware that some of her actions are going to lead to disappointment.

I can usually tell if I’ll like a series after I read the first volume, but after two volumes I can more easily decide if I really like it. The second volume of Daytime Shooting Star still features plenty of angst over a potential student-teacher romance, but the supporting cast was featured a little more and I started to find this series endearingly quirky. 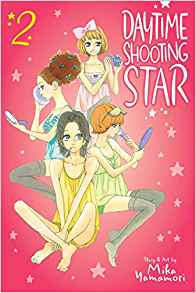 The second volume opens with the shoujo staple of a school trip, and when Suzume finds herself accidentally trapped in a ravine with Mamura the boy who is pathologically afraid of being touched by a girl, they actually have a couple moments of conversation. Suzume passes out just in time for Mr. Shishio to come to the rescue, and Yuyuka quickly figures out that Suzume has a crush when she visits her in the aftermath of the forest adventure. Yuyuka’s offhand gestures of friendship and blunt personality are a useful contrast to Suzume’s tendency to get lost in thought about her new life. There’s a hilarious scene when Suzume is studying and Yuyuka’s usual social mask slips as she launches into a tirade and Suzume grabs Mamura’s arm in a desperate attempt at distraction. Yuyuka then finds herself beset with a group of boys who follow her around in hopes of being berated. In the meantime, Mamura seems to have gotten over his fear of girls, but only with Suzume.

This volume sets up an entertaining soap opera with plenty of humor as well as more quiet moments of reflection. I’m also enjoying the art in Daytime Shooting Star, Yamamori’s character designs have a touch of whimsy, and she easily shifts from more cartoonish exaggeration to panels that highlight contemplation and internal emotion.

We haven’t had a ton of student-teacher shoujo romances being translated here recently, but perhaps series like Dengeki Daisy and Takane and Hana have paved the way. Suzume has a comfortable, slow-paced life in the country. Her classmates are all as familiar to her as siblings, and she feels free to randomly ditch class and go up on the roof of her school building to stare at the sky. Unfortunately her routines are about to be disrupted, as her parents announce that they have to go abroad for her father’s work, and they are sending her to Tokyo to live with her uncle. Suzume ends up getting lost on her way to her uncle’s house and an eccentric young man wearing a goofy hat helps her out. It turns out that Shishio is a friend of her uncle’s and her teacher! This amazing coincidence isn’t terribly surprising. The contrast between Shishio’s mannerisms when he’s off-duty and when he’s at school is amusing. 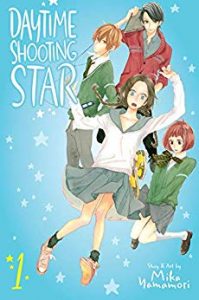 Suzume initially has a hard time fitting in with her new school, but she makes a quasi-friend in Mamura, the boy she ends up sitting next to in class. He has a almost pathological reaction of terror in response to any contact from girls. She also makes a frenemy in the form of Nekota, a girl at school who sets up a fairly weak way of deliberately excluding Suzume from a weekend outing with her classmates. When Suzume realizes what is going on, she decides to charge in and confront the issue. Shishio keeps showing up at odd moments when Suzume is feeling down, and while she’s clearly developing a hidden crush, she has plenty of other things on her mind as she attempts to deal with adjusting to life in Tokyo.

Yamamori’s art is attractive and stylish, and I enjoy the varied way Suzume is portrayed, as she swings from being timid in a new environment, to cool and confident on the volleyball court, to desperately trying to cover up evidence of a girlfight. Suzume is an engaging heroine, and I’m looking forward to see what happens next as the relationships between the characters develop more.