I’m always curious to see what Viz will decide to publish in their Viz Signature line, and I wasn’t really aware of Beastars other than just knowing that the initial license announcement was greeted with plenty of enthusiasm. Beastars takes place in an anthropomorphic high school where carnivores and herbivores are thrown together in their classes and clubs, but generally seem to stick to their own kind for dormitory arrangements. 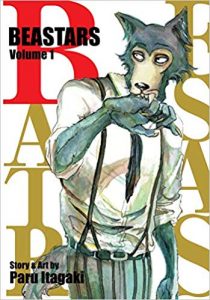 It is made very clear in the opening panels that not all is well in this high school as Tem, an alpaca student is hunted down and murdered by a mysterious carnivore in the opening panels. Suspicion lands on the grey wolf Legoshi, who was in drama club with Tem. The herbivores are mostly terrified and the carnivores are resentful at being under suspicion. A lot of the plot of Beastars seems fairly typical for any manga with a high school setting, but the animalistic nature of the students puts a bit of a spin on drama club shenanigans and random meetings across different animal families. Legoshi struggles with his own instincts and seems to be resigned to his status as an outcast. Seeing the twists of the animal nature of the students on fairly typical student roles can be amusing, as the imperious head of the drama club turns out to be the literal king of the forest in the form of Louis, a majestic red deer.

The art for Beastars is really well done, with somber grey tones that give the high school a bit of a dangerous noir vibe. In times of extreme emotion, Itagaki often fills the panel with just a character’s eyes surrounded by a dark background as a way of punctuating the intense instincts that the student body rarely acts on. The story sometimes shifts points of view, and it is interesting to learn more of the backstories of the student body. The idea of a “Beastsar,” an animal who is raised to have dominion over both carnivores and herbivores is raised briefly, and I expect the political jockying to be more intense in future volumes. I’m still a bit mystified as to why the students aren’t caught up more in an actual investigation of Tem’s murder, but I’m hoping this will be explored more in future volumes as well. The first volume of Beastars was very intriguing, and it capably set up Legoshi as a complex protagonist.