An Incurable Case of Love

An Incurable Case of Love Volume 5 by Maki Enjoji

After four volumes with plenty of workplace hijinks now that Tendo and Nana have become an actual couple, there have to be some random external influences show up to test their relationship. In the fifth volume this takes the form of a forlorn young man who shows up and demands that Nana hide him from some people who are following him. This turns into an extremely odd impromptu date involving a bowling alley and a park. Nana humors him for awhile, because her nursing instincts are kicking in. When he has a seizure, Nana has him transported to her hospital. 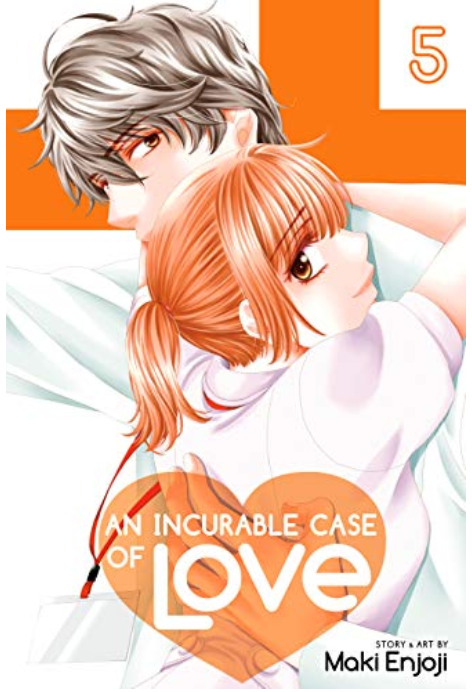 The young man turns out to be Chikashi, the heir to a conglomerate. He refuses to be transported to a private hospital and demands that Nana be assigned as his personal nurse. Nana agrees after Chikashi makes it clear that he isn’t above a bit of blackmail, he also incorporates some threats to Tendo’s career. Nana and Tendo’s relationship is strained, and while Chikashi is clearly acting like an extremely bratty patient, he’s also doing this because he’s incredibly lonely. One of the best parts of this volume was Tendo’s aggravated faces as he attempts to deal with this situation semi-professionally. Nana lets her caring nature lead to her getting taken advantage of, but it seems like Chikashi ends up in a better place than he was before, so if her goal is to maintain being an excellent nurse, she’s still on track to achieve it. While there isn’t really a high amount of drama or complex story line in this volume, this workplace romance still manages to be diverting and seeing Nana and Tendo work through their issues with the core of their relationship strong is plenty heartwarming.

An Incurable Case of Love Volume 3 by Maki Enjoji

I’ve found it difficult to concentrate on reading much in the past few weeks. That being said, I thought that the workplace romance of An Incurable Case of Love was the best series to try to get back into my somewhat irregular rhythms of manga reading. This volume immediately picks up with the scary situation of Nanase being menaced by a stalker. When Dr. Tendo attempts to protect her, she immediately puts her self between Dr. Tendo and danger. She ends up getting knocked to the ground in a pool of blood and rushed to the hospital in an ambulance. What follows is Nana’s elaborate love confession that manages to capture the combination of sweetness and absurdity that makes this manga such an enjoyable read. She announces that she’s happy because she got to kiss Tendo one time and she has no regrets except “I wanted to be your girlfriend…I wanted to kiss and cuddle you…” Alarmed, Tendo grips her hand and says that if she pulls through “I’ll be your boyfriend or whatever you want.” Nana promptly falls asleep saying “Don’t forget about me…” 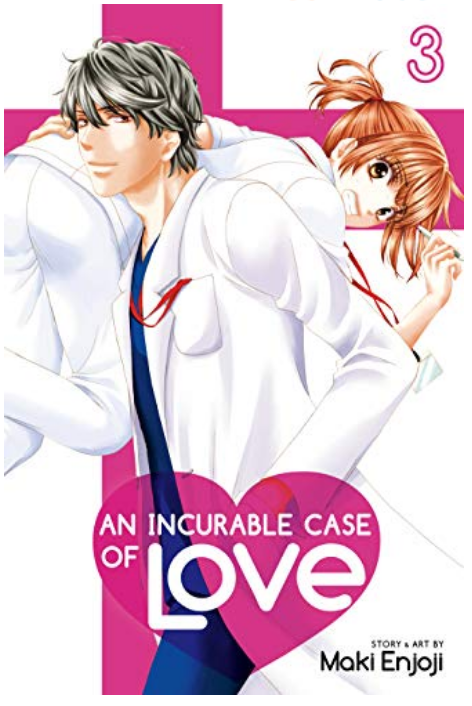 She wakes up to Tendo’s glare, because she fell asleep as opposed to fainting, and while she was injured her head wound wasn’t life threatening. They quickly get back into the regular rhythms of work, except they are officially dating. Dating means not actually going out on any dates due to their hectic schedules. They fall back into the usual rythms of this series, briefly dealing with distractions in the form of a super cute but not very compassionate new trainee nurse who has her own crush on Dr. Tendo, traveling to an educational seminar, and cooking lessons from the too handsome Kisugi. Tendo gradually is starting to show some genuine emotion and concern despite his extremely dispassionate demeanor. Nana’s relentless devotion and affection despite her general lack of encouragement will have readers agree that her workplace nickname of “Valiant One” is fairly earned. I definitely recommend picking up the three volumes of this series if you are looking for a fun josei escape.

An Incurable Case of Love, Volume 2 by Maki Enjoji

As with most romance manga I was totally expecting an additional antagonist to show up to further complicate the non-relationship between Dr. Tendo and nurse Nanase. Dr Kusagi is unfailingly smiling, with a focus on his outward demeanor that seems suspicious. Kusagi quickly keys in to the budding relationship between Nanase and Tendo and attempts to subvert it by plying Nanase with alcohol, even though after an earlier outburst and piggybacking episode with Dr Tendo, she is determined to cut down on her consumption. 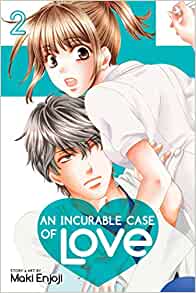 Tendo immediately starts acting irrationally territorial, and if you enjoy grouchy and withholding heroes, this manga has plenty of scenes of Tendo attempting to object to things and then realizing that he has little standing to interfere in Nanase’s life. This doesn’t stop him though!

While the story is developing with a very familiar formula, Enjoji is executing it extremely well, with little touches that make the series unique. I continue to be amused by the workplace culture at the hospital, and the gang of nurses who continue on with their nicknames of “Valiant One” for Nanase and “Dark Lord” for Tendo. Their support of this unconventional mentoring relationship developing into a friendship is mainly because no one wants to be the target of the Dark Lord’s criticism, but it all still manages to seem like a relatively supportive and friendly workplace! The hospital setting also feels a bit fresh to me after reading plenty of manga series set in offices. Enjoji doesn’t have a ton of variation in her character designs, but she does draw with great expression as Nanase struggles to deal with her romantic life and move ahead with her goals as a new nurse.

Nanase and Tendo keep getting thrown together for various reasons, and the volume closes with a take on a serious situation that can befall any woman who might be easily targeted in a helping or service profession. The main workplace romance combined with side stories dealing with more serious topics seems like a promising way for this series to develop. I’m also enjoying Nanase’s personality, she’s young but still sometimes blunt about expressing what she wants, and I’m curious about how her character will develop as she becomes more comfortable with her new profession. We might only get one josei disguised as shoujo series being released at a time from Shojo Beat, but An Incurable Case of Love fits in well with the rest of the line, and I’m enjoying it while I wait for even more josei releases. 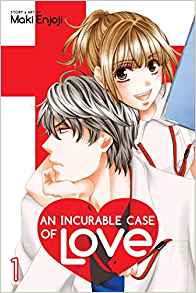