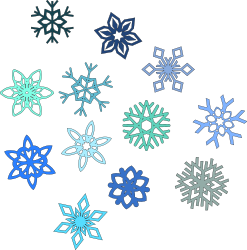 Happy New Year, Manga Bookshelf readers and friends! Thank you so much for being here with us and giving us so much encouragement and support over the past year. Since many of us are just returning to our regular daily lives after the holidays, here’s a quick rundown of everything that happened here at Manga Bookshelf over the last week!

The “Best of” lists have begun! Sean, Michelle, Anna, and I each made a Pick of the Year and I posted the first two installments of my three-part series here at Manga Bookshelf:

Look for Part 3 sometime over the next week!

I also posted a holiday edition of My Week in Manga, featuring all the manga I found under the tree this year.

At the Manga Bookshelf forums, reader Gerichan and I discussed all four current volumes of Odagiri Hotaru’s The Betrayal Knows My Name. Our holiday book club schedule ran through the week, but please feel free to chime in anytime and continue the discussion! Also in the forums, I asked “What’s your most anticipated manga of 2013?” and Matt Blind wants to know about your 2013 Manga Resolutions!

Sean posted a slew of reviews last week, including: Kaoru Mori: Anything and Something, Blood Lad, Vol. 1, Higurashi When They Cry, Vol. 20, and Nisekoi, Vol. 1. Meanwhile, the Battle Robot collaborated on two new batches of Bookshelf Briefs (12/24/12 & 12/31/12). We also checked out this week’s new print manga and the next two weeks’ worth of offerings from JManga.

And finally, writing from Taiwan, Sara K. shared two new installments of her column “It Came from the Sinosphere,” first on Lai An’s manhua series Angel Hair and then on the Taiwanese idol drama Full Count.

More to come as we dig into the New Year! I hope you’ll join us!

Here’s what you may have missed at Manga Bookshelf last week, July 29th-August 4th!

After the previous week’s outpouring of CLAMP, last week belonged to Manga Bookshelf’s regular contributors and their diverse collection of topics.

The Battle Robot shared our Pick of the Week and filed a new installment of Bookshelf Briefs.

On August 1st (aka “Yaoi Day”), I blogged about BL manga and privilege.

This month in “Magazine no Mori,” Erica Friedman talked about the “slightly eccentric” Young King Ours.

In the latest installment of “It Came from the Sinosphere,” Sara K. shared her thoughts on Jin Yong’s wuxia novel The Fox Volant of Snow Mountain.

Anna, Emily, Eva, and Nancy take on the K-drama Big in their latest edition of “Bringing the Drama.”

In last week’s “Combat Commentary,” Derek Bown gave us an overview of the fighting in One Piece.

Kate reported on Vertical’s license announcements from Otakon and VIZ’s summer manga sale, and reviewed volumes 3-5 of Dawn of the Arcana.

Sean reviewed Soul Eater Not!, Vol. 1 and Jiu Jiu, Vol. 1. He also took a look at Manga the Week of 8/8, and shared some news about the upcoming Looney Tunes Platinum Collection 2.

Here’s what you may have missed at Manga Bookshelf last week, July 22nd-28th!

CLAMP was the keyword of the week, as we hosted July’s Manga Moveable Feast focusing on their work. These were the contributions from Manga Bookshelf bloggers:

You can find the full archive of posts here.

In the latest installment of “It Came from the Sinosphere,” Sara K. looked at the idol drama Autumn’s Concerto.

Back from SDCC, Brigid did some linking with San Diego recap & some things to look forward to, Viz speaks!, and News from JManga, new manga on the shelves.

Here’s what you may have missed at Manga Bookshelf last week, July 15th-21st!

The Battle Robot files another installment of Bookshelf Briefs. We also make our Pick of the Week.

Derek Bown continues his Comment Commentary column with some strong words about Naruto.

In last week’s “It Came From the Sinosphere,” Sara K. introduces us to the Taiwanese comics anthology Creative Comics Collection.

Still holding down the fort, Kate provides us with some Monday morning manga links, as well as a batch for Wednesday.

With so much going on here these days, it seemed time to establish a weekly roundup. Here’s what you may have missed at Manga Bookshelf last week, July 8th-14th!

The Battle Robot each chose a Pick of the Week and filed a new installment of Bookshelf Briefs.

Megan checked out The Comic Book History of Comics and Chicks Dig Comics, while Sean continued his Kliban excavation in Not By Manga Alone: Supreme and other drawings.

Sara K. continued her exploration of Chinese-language pop culture with a look at the Taiwanese feature film Cheerful Wind in last week’s installment of It Came From the Sinosphere.

Sean checked out volume three of Hetalia Axis Powers from the semi-revived Tokyopop and Olympos from Yen Press, and shared his thoughts on this week’s upcoming manga.

Brigid shared some links, including news about the upcoming Sailor Moon anime, before heading off to San Diego. Kate tends the store in Brigid’s absence.

Brigid talked about manga with a reporter at The Boston Globe, and Sara K. shared some insights on learning to read Chinese (recommendation: comics!) at Hacking Chinese.