By Keiichi Sigsawa, Kouhaku Kuroboshi, and Tadadi Tamori, based on the series created by Reki Kawahara. Released in Japan by ASCII Mediaworks, serialized in the magazine Dengeki Maoh. Released in North America by Yen Press. Translated by Stephen Paul.

The Sword Art Onlione franchise has done a lot of worldbuilding over the course of the series, detailing no less than four different games/VR environments. Some are more popular than others, but I think Gun Gale Online struck a cord with a lot of gamers, as usually these sorts of novels concentrate on sword-based fantasy RPGs – as indeed Sword Art Online did for its first four volumes. So the idea of combining that sort of immersion with a game filled with all sorts of guns, rifles, and lightsaber–sorry, beam swords was incredibly appealing. As for the publisher, I imagine having a spinoff series that did not have to be overseen by Kawahara as much as the others was a plus – the number of regular SAO cast in this first volume is zero. So if you want to read about Gun Gale Online but hate Kirito, have I got a series for you. 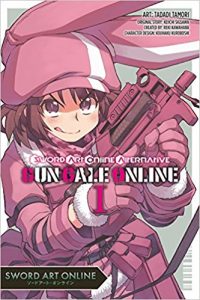 This manga is, like a lot of Sword Art Online, based off of a novel. Unfortunately, the novel has not been licensed here as of yet. It’s by Keiichi Sigsawa, who some may know as the creator of Kino’s Journey. Our heroine is Karen, an incredibly tall girl who went to a women’s college to try to change her self-conscious self, but found when she got there that most of the other students already knew each other, and she’s still huge, so she’s mostly a social outcast again. She decides to try to forget about it by playing a VRMMO… but every one she tries gives her another tall avatar. As a last resort, she tries Gun Gale Online, and finds that – finally – she’s short and cute. Now she and her pink gun (OK, Bambi) can have as much tiny fun as they want! (I am reminded of Log Horizon, where Akatsuki originally played as a huge male assassin because “games allow you to be something you’re not”.

We see Llenn (her screen name) gradually getting used to the game with the help of another player, Pitohui, who is the very definition of “obviously evil”, not that this seems to register with Llenn. As she gets a gun and starts to go after other players, she begins to have a lot of fun – botjh because her small form is very good at this sort of thing and also because, well, it’s a game, and in a game, killing others can be fun. That said, this is SAO, so we know those sorts of feelings are always dangerous, especially when helped along by Pitohui, who seems to be trying to make Llenn into a tiny little killing machine. (There is a very disturbing scene in reality midway through the book, showing a young woman (I really hope it’s a young woman, she looks far too young) on top of a guy, sexing him up while also threatening him regarding the upcoming GGO match. It’s heavily suggested this is Pitohui in real life, and does not bode well for our heroine. It also feels oddly out of place.)

The rest of the book is gun battle fun, as Llenn gets a partner who seems taciturn and scary at first but eventually shows he’s a nice enough guy. Are they good enough to win a tournament even though there’s only two of them? Even if their opponents look to literally be JSDF? What is Pitohui scheming? And can we really get through an SAO spinoff without Kirito showing up at all? Find out in the next thrilling volume!

By Reki Kawahara and abec. Released in Japan by ASCII Mediaworks. Released in North America by Yen On. Translated by Stephen Paul.

I don’t think I’ve ever come across a book that more perfectly summarizes the best and the worst of Sword Art Online in one handy gulp. The high points of this book are excellent, and the low points are incredibly frustrating. Put together, though, we have a series that continues to intrigue even as the main cast that isn’t Kirito continues to be entirely absent – Asuna gets a few pages in the middle, but for the most part we are entirely in Kirito’s fantasy world here. Fortunately, the first half of the book or so gives another break from Kirito’s first person, as we get a long stretch narrated by Eugeo, who is nice and earnest and a good contrast to Kirito. I was expecting that we would see more training at the knight academy, probably ending up in the giant fighting tournament that had been lampshaded earlier. But then things went entirely off the rails. 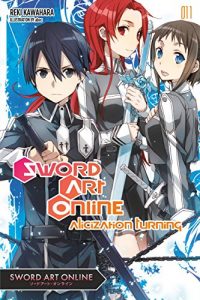 Let’s get the bad out of the way first. We have yet ANOTHER instance where female characters are captured and threatened with rape, so that we may see how irredeemably evil the villains are (Kawahara’s villains remain his giant weak point – he can’t write nuance) and also justify Kirito’s violence towards them. This is even more annoying because we’d barely gotten to know Tiese and Ronie, so the threat doesn’t have as much of a reader impact as it did with Asuna and Shino, assuming the reader impact cannot just be narrowed down to “rolls eyes, sighs”. And then due to the plot moving on, we don’t see the girls after this, which just makes it more blatant it was done for pure “damsels in distress” reasons. I understand in the original webnovel this was taken from, the girls actually were raped – thank heavens for small favors that this was changed. SO BORED WITH RAPE THREATS, KAWAHARA.

Of course, disposing of the two villains does mean that the plot makes a right turn, as now Kirito and Eugeo are captured by the Synthesis Knights and brought to the Central Cathedral… which was their goal, to be fair, but probably not as prisoners to be judged. Things pick up a great deal here, as we find that Alice (remember Alice?) is one of the knights, but doesn’t seem to remember Eugeo at all. Kirito takes up the narration again here, and it works out well, showing off his smarts in knowing when to push hard on “this is a game world with game rules” – breaking the chains was particularly good. What’s more, after a long and highly interesting fight scene that shows us the knights may in fact be brainwashed, we are given a long, long infodump by a new character that actually feels realistic and welcome, telling us a lot more about the Underworld, how it got its start, and the evil woman now at the head of it all.

In the end, this is book 3 of a 10-book arc, so there’s a limit to how far it can take things. But once you get past Kawahara deciding that nothing adds to drama quite like rape threats, it’s enjoyable and fun, with excellent fight scenes. Just… get a new gimmick. I beg you.

By Reki Kawahara and abec. Released in Japan by ASCII Mediaworks. Released in North America by Yen On. Translated by Stephen Paul.

If the 7th Sword Art Online novels felt rushed because we weren’t used to the pace of a single volume story, then this book has the opposite issue. Alicization Running is filled with cool scenes, exposition, and character development, but it is the very definition of “Part 2 of 10” – it doesn’t stand on its own as a novel, really. For those who expected we’d see Kirito and Eugeo reuniting with Alice in this book, she’s barely even mentioned except as a goal, because to get to her they have to become Knights, which means winning a tournament, which means going through sword training school, which means winning ANOTHER tournament. Kawahara is stretching this out, for good or ill. Fortunately, it’s partly good – this is still readable, and by now I hope the average Sword Art Online reader takes Kirito’s success with a sword for granted and does not grind their teeth at it. 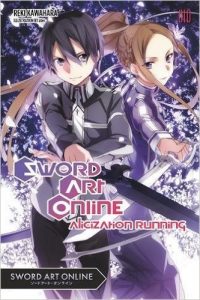 The other good news is that the first third or so of this book is devoted to Asuna in the real world, who is trying to figure out what happened to Kirito, who is not, as we may have expected, in a hospital but has instead completely vanished. We do eventually find out where he is, with a lot of seeming villains who are really helping out heroes and the like. We also get more of one of my least favorite things in Sword Art Online – praising Akihiko Kayaba, the villain of the first arc who condemned thousands to death, but is really just a misunderstood man with a dream, something that even Asuna says she can respect, which just makes me shake my head. Unfortunately, the rest of Asuna’s section is taken up with huge swaths of technobabble as Kikuoka explains what they’re trying to do here, why they’re trying to do it, and why Kirito is here. Some of those explanations are a bit disturbing – the author even has to remind us in the afterword that he does not necessarily agree with his characters (I’m guessing he’s meaning the use of DELICIOUS TASTY BABY SOULS).

Meanwhile, Kirito’s having an adventure, and while he does think of Asuna and the others, and misses them, his focus is on getting to the central capitol. This involves a lot of showing off, because this is Kirito after all, as well as forging him an amazing weapon that can be the equal of the sword Eugeo possesses (which is a black blade almost identical to his Aincrad one). He also gets to face off in a battle with the #1 swordsman at the school… who sadly is not the young woman on the cover. She’s the second strongest swordsman, and the plot is set up to build to a final battle against her that never happens. I’d like to say it’s not just because she’s a woman, but let’s be honest, it probably is. As always, Kirito is at his most interesting when he’s upset or something goes wrong, such as when his classmates’ petty bullying and destruction leads him to the literal power of prayer to fix things (fortunately, this is a gaming world, so it succeeds).

I wish we had more of Eugeo, who’s a nice sweet kid but not much else – he got far more development last time. As for the regulars who aren’t Kirito or Asuna, well, Leafa and Sinon get to have a confab with Asuna at the start of the book, but Lisbeth and Silica are reduced to begging on the back cover. Yui actually fares better than they do – her discussion of AIs, and how in the end she isn’t the amazingly self-aware fairy daughter she appears to be, is well-written and also chilling. This is a necessary volume of Sword Art Online if you want to read more of Alicization, but by itself it’s a bit frustrating. Recommended for fans of the series, but I’m hoping for a bit of a Turning point next time…

Also, Kirito spends most of the book being protected by invisible sentient head lice, who I can’t help but picture as Jiminy Cricket. I just want to throw that out there.