It’s difficult for me to imagine that anyone really needs me to sell NANA to them but the truth is I will enjoy writing this, and if it encourages one or two more people to jump on the NANA bandwagon, that will thrill me. 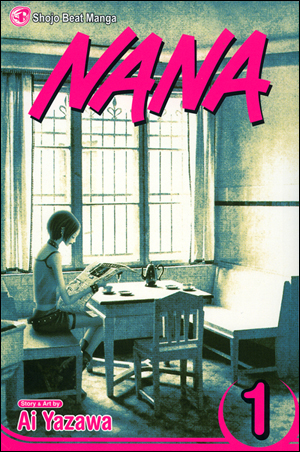 NANA is the story of two young women, both named Nana, who meet on the train to Tokyo and, through a series of coincidences, end up becoming roommates in an old seventh-floor walkup. In many ways that apartment, number 707 (“Nana” in Japanese means “seven” by the way), is nearly as important a character as the two Nanas themselves.

Written and drawn by Ai Yazawa (author of Paradise Kiss, among others), NANA contains some of the most authentic human beings I have so far encountered in manga. Yazawa’s characters are rich and complex, each just a little bit (or more than a little bit) broken as most of us humans are, and because of this, their relationships with each other and their choices, both good and bad, feel so real, they could come straight out of the reader’s own life. It would be so easy for a story like this, which focuses mainly on relationships, to fall into soap opera-like melodrama but the intensely real characters save it from doing so, time and time again. This is especially surprising in a manga where a good portion of the characters are rock stars.

END_OF_DOCUMENT_TOKEN_TO_BE_REPLACED

One of the series I’m always trying to draw friends into is Akimi Yoshida’s classic shojo manga, Banana Fish. I first discovered this series, embarrassingly, through wikipedia, as I was trying to find shojo manga that I could really enjoy. It was this entry that piqued my interested in the series, citing a quote from Frederik L. Schodt, which described Banana Fish as “…one of the few girls’ manga a red-blooded Japanese male adult could admit to reading without blushing.” Right around the same time, mention of Banana Fish began turning up in interviews with Jason Thompson, just before the publication of his book, Manga: The Complete Guide, and though I don’t remember exactly what he said about it back then, it had the effect of spurring my interest into action, and before I knew it, I began buying the series.

I’m certainly not the only person who has tried to generate interest in Banana Fish. Shaenon Garrity made it part of her awesome Overlooked Manga Festival (one of my very favorites of that series so far), and to my mind, no further persuasion should be needed. Still, I find Banana Fish is a tough sell with friends. There’s no way to effectively preview the series, as it is difficult to find in libraries or brick and mortar bookstores. There are not even fan scanlations available to view. Anyone who wants to jump into this series pretty much has to commit to buying at least one book they may not end up liking, and I’ve found just a few who are willing to risk that. I’m going to try here to build on the case that Shaenon Garrity has already made for this series, with hope that even just one more person might choose to take that risk.

END_OF_DOCUMENT_TOKEN_TO_BE_REPLACED

Once upon a time in my secret fannish life, sad and frustrated with the small size of the xxxHolic fandom, I created a so-called “persuasion post.” Its purpose was to inspire friends to begin reading the series, write lots of fanfiction, and join in on all my xxxHolic glee. I think, however, that this post deserves better than being hidden behind a fannish identity, so I have unearthed it from the clutter and reworked it for a broader audience. Behold, the new (de-fandomed) xxxHolic Persuasion Post:

First of all, this post is specifically about the manga. The anime is nice enough in its way, but it can’t even begin to compare to the manga and I think it is better to watch it if you’ve already read the manga, so that you can fill in the blanks with your own mind.