SEAN: The end of the fiscal year! What books are just barely part of their publisher’s 20-21 financials?

Airship has an early digital title: Loner Life in Another World (Hitoribocchi no Isekai Kouryaku ~ Cheat Skill wa Urikiredatta ~), a title that may sound familiar as Kaiten Books has been putting out the manga. The premise is exactly what you’d expect, but I am actually giving this one a try, as I’ve heard the original Japanese is so impenetrable that even hardcore readers have trouble figuring it out. I want to see how the translators do.

ASH: It does sound as though they may be doing some heavy lifting!

SEAN: Airship also has Drugstore in Another World 2 (early digital) and Grimgar of Fantasy and Ash 15 (print). 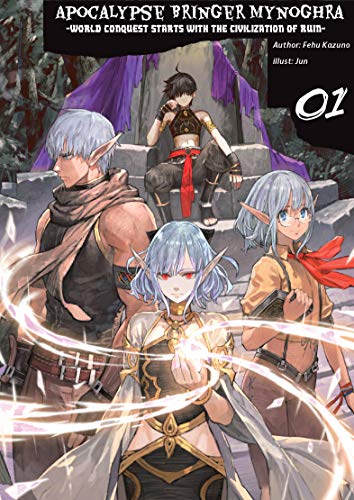 Cross Infinite World has Apocalypse Bringer Mynoghra: World Conquest Starts with the Civilization of Ruin (Isekai Mokushiroku Mynoghra: Hametsu no Bunmei de Hajimeru Sekai Seifuku), a title that… does not sound like their usual sort of book. Our hero is an ill young man who ends up reincarnated… as an evil God. Overlord fans might enjoy this.

Two digital debuts for J-Novel Club. Reborn to Master the Blade: From Hero-King to Extraordinary Squire ♀ (Eiyu-oh, Bu wo Kiwameru tame Tensei su. Soshite, Sekai Saikyou no Minarai Kisi ♀) is the story of a hero-king who wants to live his next life as a warrior. He’s reincarnated… but as a noble daughter who’s ineligible to be a knight. What now?

SEAN: The other title is The Sidekick Never Gets the Girl, Let Alone the Protag’s Sister! (Shinyuu Mob no Ore ni Shujinkou no Imouto ga Horeru Wake ga Nai), the story of a former hero in a fantasy world reincarnated as a normal Japanese high school kid. He wants to be dull and normal, and let his handsome popular friend be the protagonist… then he meets said friend’s little sister.

Also out next week: Ascendance of a Bookworm 13, The Great Cleric 3, My Next Life As a Villainess 9, and A Wild Last Boss Appeared! 5.

A print debut for Kodansha with Peach Boy Riverside, which we’ve seen in digital-only format. A retelling of the Momotaro legend in fantasy world format.

ASH: A reimagining of Momotaro, you say? That completely slipped by me when it was released digitally.

SEAN: Also out in print: That Time I Got Reincarnated As a Slime 16 and UQ Holder 22.

Debuting digitally is Quality Assurance in Another World (Kono Sekai wa Fukanzen Sugiru), a Comic Days title about a young girl who meets a “Seeker”, someone who tries to fix problems in their world. But… just what *is* their world, anyway?

Also out is the 6th and final volume of Atsumori-kun’s Bride to Be, A Couple of Cuckoos 4, Heaven’s Design Team 6, I Fell in Love After School 8 (also a final volume), Seven Shakespeares 16, and Shojo FIGHT! 17.

MICHELLE: I have really enjoyed Atsumori-kun’s Bride to Be, and look forward to completing it. I liked I Fell in Love After School too, but haven’t read as much of that one.

SEAN: Seven Seas has If It’s for My Daughter, I’d Even Defeat a Demon Lord 6 (this is the manga), Magical Girl Site 15 and the 8th and final volume of Merman in My Tub.

ASH: Wow, it’s been a long time (a few years) since we last saw a new volume Merman in My Tub!

SEAN: Sol Press has the 4th and final volume of Why Shouldn’t a Detestable Demon Lord Fall in Love?!. 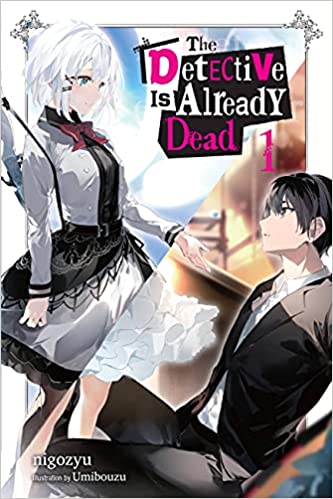 Yen On debuts The Detective Is Already Dead (Tantei wa Mou, Shinde Iru), the story of the sidekick to a famous detective. After said detective died, he theoretically returns to normal life… but then a girl shows up who looks an awful lot like the dead detective. This is supposedly excellent.

SEAN: There’s also Bofuri: I Don’t Want to Get Hurt So I’ll Max Out My Defense 2, A Sister’s All You Need 10, and Suppose a Kid from the Last Dungeon Boonies Moved to a Starter Town 6.

The debut for Yen Press is Farewell to My Alter: Nio Nakatani Short Story Collection, which is what it says. By the creator of Bloom Into You.

Yen also gives us After School Bitchcraft 2, A Certain Magical Index 23, the 2nd and final Dear NOMAN, Heterogenia Linguistico 3, High School Prodigies Have It Easy Even in Another World! 10, the 11th and final The Honor Student at Magic High School, I Cannot Reach You 2, Kakegurui Twin 10, Love at Fourteen 10, Mieruko-chan 3, My Youth Romantic Comedy Is Wrong As I Expected 15, Play It Cool, Guys 2, Sacrificial Princess and the King of Beasts 13, the 3rd and final Strawberry Fields Once Again, Sword Art Online: Project Alicization 3, and Trinity Seven 23.

SEAN: To balance your books, you need to buy more manga! What are you getting?