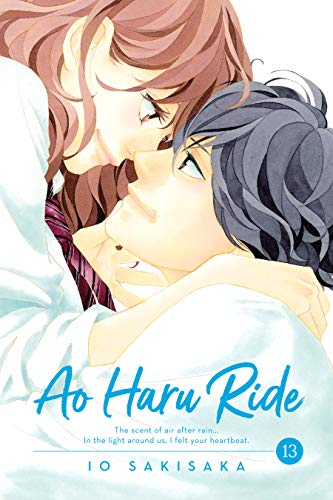 MICHELLE: I’m excited by all the final volumes out next week. I’m definitely interested to read the conclusions of Ao Haru Ride and The Demon Prince of Momochi House, but most look forward to the resolution of To Be Next to You, a shoujo offering of Kodansha’s digital-first initiative. I’ve really enjoyed what I’ve read by Atsuko Namba and look forward to more in the future.

SEAN: Lotsa Viz I’m getting, and I’m tempted to pick Yona (always my default). But I really loved Sexiled, and want to see more by the author, so I will go with A Lily Blooms in Another World, despite having read a very similar book 3 weeks ago.

KATE: With Halloween around the corner, I’ll put in a word for the new digital edition of Junji Ito’s Dissolving Classroom, a weird, funny, and icky collection of short stories about the siblings from hell. Plot-wise, Ito’s manga doesn’t have much to do with Kazuo Umezu’s similarly titled Drifting Classroom, but it shares the same penchant for over-the-top gore and WTF? moments.

ASH: Despite already owning the first trade paperback edition of Blade of the Immortal, I can’t resist picking up the new deluxe release in all its glory. But I’ll also be turning my eyes towards the debut of another dark, action-packed series this week – Chainsaw Man.

ANNA: There’s a bunch of manga coming out this week that I’m excited to read, but the one I’m most excited about is the final volume of Ao Haru Ride, which has managed to tell a compelling story of teen romance developing despite past tragedy.