SEAN: Happy Thanksgiving! We give thanks for this bounty of manga and light novels.

SEAN: Ghost Ship has a 7th volume of the infamous Yuuna and the Haunted Hot Springs.

J-Novel Club has two debuts, both digital manga. The first is the manga adaptation of The Faraway Paladin, a favorite series of mine. It runs in Overlap’s Comic Gardo, a magazine that seems to exist so that its novels can get manga adaptations.

MELINDA: When Sean says “a favorite series of mine” I feel like I should take note! 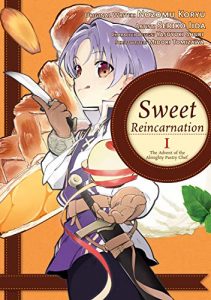 Sweet Reincarnation (Okashina Tensei) is a seinen manga from TO Books’ Comic Corona, which is to TO Books what Comic Gardo is to Overlap. This is the story of a boy trying to become the strongest in the world… at being a pastry chef!

MELINDA: Signing up to be hungry as I read, I guess.

SEAN: On the novel front, J-Novel Club has the 8th, and so far final, Amagi Brilliant Park, and the 3rd Record of Wortenia War.

Kodansha has some print releases. First among these is the Magic Knight Rayearth Box Set. This, the first of two planned sets, is a gorgeous hardcover bells and whistles edition of the manga, in larger trim size as well. It has the first three books (i.e. Season 1), which also are getting a digital release.

ANNA: Pondering this. I think I have the old Viz version in the larger size stashed somewhere in my house.

ASH: This is one of the few CLAMP works I actually haven’t read. The set looks really nice.

MELINDA: Here for this!

MICHELLE: I enjoyed the first volume of If I Could Reach You and look forward to reading the second. 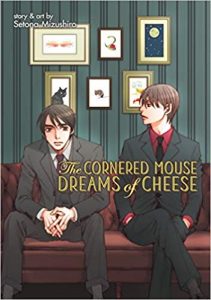 Seven Seas has two debuts, which could not be farther apart from each other. One, The Cornered Mouse Dreams of Cheese (Kyuuso wa Cheese no Yume o Miru), is one of the biggest BL titles in recent years, and much awaited. It ran in Shogakukan’s josei magazine Mobafura.

ASH: I’ve been waiting for this series for so long! For a while there, it seemed like it was going to be unlicensable. Very glad Seven Seas was able to come to the rescue.

SEAN: The other is How Heavy Are the Dumbbells You Lift? (Danberu Nan Kiro Moteru?), a shonen title from Shogakukan’s Ura Sunday online magazine, just got an anime series. A girl who wants to lose weight goes to the gym, where she meets a lot of buff guys, but also the student council president, and a hot instructor. I’ve heard it takes its getting in shape quiet seriously.

ASH: I’m actually really curious about this one.

ASH: Blank Canvas is SO GOOD. (Granted, just about anything by Akiko Higashimura is… )

Vertical has the 3rd omnibus (containing Books 7-9) of Katanagatari: Sword Tale, from Nisioisin.

They also have the 13th Witchcraft Works.

Yen On also has a bunch of titles, though some of these are already out digitally. The debut is The Greatest Demon Lord Is Reborn As a Typical Nobody (Shijou Saikyou no Daimaou, Murabito A ni Tensei Suru). The demon lord reincarnates but lacks a sense of perspective, and does not realize how powerful he is, or how many girls are in love with him, etc. 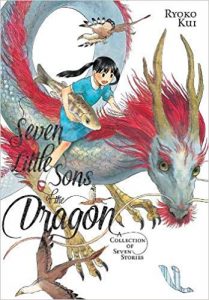 Yen Press’s manga debut is Seven Little Sons of the Dragon (Ryuu no Kawaii Nanatsu no Ko), a collection of short stories by the creator of Delicious in Dungeon. It ran in Fellows!, so is a must buy.

MICHELLE: Ooh! This hadn’t been on my radar.

ASH: I love Delicious in Dungeon, so I’m really looking forward to reading more by the creator.

SEAN: Ending next week is Kagerou Daze, whose 13th and final volume comes out. For those wondering what do do next, watch/listen to everything in order! The order is 1) songs, 2) manga, 3) light novels, 4) Mekakucity Actors anime.

Also out are Angels of Death Episode.0 3, Death March to the Parallel World Rhapsody’s 8th manga volume, For the Kid I Saw in My Dreams 3, The Honor Student at Magic High School 10, Is It Wrong to try To Pick Up Girls in a Dungeon: Familia Chronicle: Lyu’s 5th manga volume, Kakegurui Twin 4, Monster Wrestling: Interspecies Combat Girls 2, and Phantom Tales of the Night 2.

ASH: Ah, that reminds me I haven’t read first volume Phantom Tales of the Night, yet!

SEAN: Assuming you’re not too full of turkey, what are you getting next week?