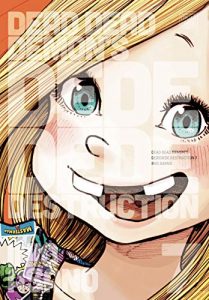 ASH: Portions of The Drifting Classroom have been out of print for some time, so I am thrilled that a new hardcover edition is being released. For those who appreciate horror manga, this series is a must. It’s an extremely intense work with dark psychological elements. Other great manga are being released this week, too, but this one is my pick.

SEAN: I acknowledge the brilliance of The Drifting Classroom while also wanting to stay the hell away from it. As a result, I’ll pick the new Dead Dead Demon’s Dededede Destruction, which continues to be fun to read even as I fear that it will end with the entire world dead.

MICHELLE: Dreamin’ Sun has reached its conclusion, and thus I feel a bit of a pang for not choosing it, but a new volume of Shojo FIGHT! comes out this week, and that’s simply more enjoyable to me.

KATE: No surprise here–my pick is Kazuo Umezu’s batshit classic The Drifting Classroom. The new VIZ edition is an essential addition to any horror manga fan’s library. On the fence? Here’s what I had to say about volume one.

ANNA: There’s a lot of great manga coming out this week, but I have to say my loyalty lies with Dead Dead Demon’s Dededede Destruction.