J-Novel Club has infinite light novels, or at least Infinite Stratos 9 (digitally) and Infinite Dendrogram 1 & 2 (print). There’s also the print debut of Ascendance of a Bookworm, as well as the 3rd light novel digitally, which wraps up the first arc. And we get the 3rd Full Metal Panic! novel.

ASH: Oh, print debut! That means it’s time for me to check out Ascendance of a Bookworm! 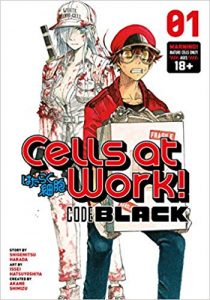 SEAN: In print, Kodansha debuts a spinoff, Cells At Work: Code Black. Unlike the relatively healthy body the main series takes place in, Code Black takes place in an unhealthy middle-aged body. It also seems to have Rule 63 Red and White Blood Cell. It runs, believe it or not, in Morning Magazine.

MICHELLE: Probably I will read this.

ASH: I will absolutely read this! I greatly enjoy the original Cells at Work.

SEAN: Digitally we get another debut with Smile Down the Runway (Runway de Waratte), a manga about a girl who’s trying her best to be a runway model at her father’s agency. Unfortunately… she’s only 5’2″. Can a short woman still have what it takes to be a model? Despite a very josei-sounding premise, this actually runs in Weekly Shonen Magazine. That said, it doesn’t seem like it has the usual “danger signs” of Shonen Magazine series.

MELINDA: I feel like there’s no way this can be anything but horrifying. But. As Anna said, “Hmmmm.”

SEAN: There’s also Blissful Land 4, Boarding School Juliet 12, Goodbye I’m Being Reincarnated! 2, My Pink Is Overflowing 3, My Sweet Girl 6, Our Precious Conversations 4, and The Tale of Genji: Dreams at Dawn 7.

ASH: I still have my fingers crossed for print release of The Tale of Genji.

Tokyopop gives us a 3rd Aria the Masterpiece, and a 6th Futaribeya, but still can’t provide any cover artwork without a giant ‘coming soon’ banner on it. Not that I’m bitter. 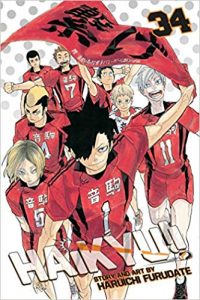 Viz has no debuts this month, alas. But hey, this does not mean they don’t have a ton. On the shonen end, we get a giant Assassination Classroom box set with every single volume. There’s also Black Clover 17, Blue Exorcist 22, Demon Slayer: Kimetsu no Yaiba 8, Dr. STONE 7, Dragon Ball Super 6, Haikyu!! 34, Kaguya-sama: Love Is War 10, One Piece 3-in-1 29, Twin Star Exorcists 16, and Yu-Gi-Oh! Arc V 6.

MICHELLE: Of these, I’m only reading Haikyu!!, but my love for it is boundless.

ANNA: One of these days I need to catch up on Haikyu!!, but my kids love it and read every volume as it comes out. I am enjoying Dr. STONE too.

ASH: Ack! I am so far behind on my Shonen Jump reading!

SEAN: On the shoujo end, there is Anonymous Noise 16, Daytime Shooting Star 2, Kakuriyo: Bed & Breakfast for Spirits 5, Snow White with the Red Hair 3, and The Demon Prince of Momochi House 14.

MICHELLE: Quite a lot of goodness here! I’m perhaps most keen for the newer titles like Snow White with the Red Hair and Daytime Shooting Star.

ASH: Likewise, although The Demon Prince of Momochi House still has its hooks in me, too.

SEAN: Lastly, Yen Press may be into September but it still has its August titles, some of which are debuts. Combatants Will Be Dispatched! (Sentouin, Hakenshimasu!) is a new light novel series by the creator of KonoSuba, and is supposed to be quite funny. A mix of sci-fi and fantasy, it’s about an evil minion who finds he has to invade a fantasy-based world. 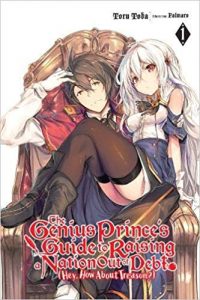 The other light novel debut has a more light novel-ish title, The Genius Prince’s Guide to Raising a Nation Out of Debt (Hey, How About Treason?) (Tensai Ouji no Akaji Kokka Saisei Jutsu ~Sou da, Baikoku Shiyou~). Again, the title is the plot. The prince wants an easy life without much to do, so decides to betray his country. Sadly, he’s too good at being a genius, and every scheme he comes up with makes the nation’s people love him more.

On the manga end, Yen debuts three titles, though one is a light novel adaptation. Do You Love Your Mom (and Her Two Hit, Multi-Target Attacks)? needs no introduction by now, so we’ll move on, except to say it runs in Young Ace Up.

Phantom Tales of the Night (Bakemono no Yawazukushi) is a shoujo-ish series from Comic Gene, and is about an inn which takes its payment in secrets. Sounds sort of anthology-esque to me.

SEAN: Reborn as a Polar Bear: The Legend of How I Became a Forest Guardian (Shirokuma Tensei: Mori no Shugoshin ni Natta zo Densetsu) runs online on the Comic Walker site, and its title is, again, its plot. But, werewolf sisters! Also, the polar bear seems unlikely to amass a harem.

SEAN: So what titles are you hiding behind your textbook at school to read?