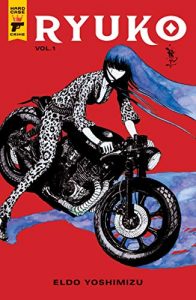 SEAN: My Hero Academia’s 19th and 20th volumes have what may be my favorite “light” arc of the series. As such, the 20th volume, like the 19th, is my pick. If only for those two faces. You know the ones I mean.

MICHELLE: Courtesy of the awesome Shonen Jump vault, I’m all caught up on My Hero Academia now, so volume 20 is actually a reread for me, but it’s a testament to the greatness of this series that I’m still looking forward to it. The light arc concludes, and is definitely great, but I also really enjoyed finally getting to meet a mysterious hero who’s been hinted at and finally makes his debut in this volume.

KATE: After being publicly shamed for my tendency to plug the same manga over and over — notice I resisted the temptation to type “again” — I had to bring my Recommendation A-Game this week. My pick is Ryuko, Titan Comic’s first foray into serialized manga. It looks like the sleazy, brutal, fast-paced stuff that Kazuo Koike used to pump out by the truckload, and I can’t wait to read it. The cover alone is swoon-worthy!

ANNA: There’s so much great shoujo coming out this week, it is hard for me to single out just one title. But I have to admit when looking over everything coming out that I’m always most enthusiastic about Yona of the Dawn, so volume 19 of that series is my pick!

ASH: So many series that I’m following have new volumes this week, making it very difficult to choose where to start. So, thanks for the reminder about Ryuko, Kate! I’ve been very curious about that series, enough to make it my pick, too.