SEAN: OK, I double checked the Kodansha list this time, so we should be good to go.

We’ll start off with Dark Horse, who has the 10th I Am A Hero omnibus. I think the 11th is the last.

ASH: I’m a few volumes behind in my reading so I’m not sure how things have progressed, but the series started out very strongly.

SEAN: Apologies to J-Novel Club, who have a bunch of digital manga debuts, including ones I missed that came out this week. First what I missed: An Archdemon’s Dilemma: How to Love Your Elf Bride, How a Realist Hero Rebuilt the Kingdom, The Magic in This Other World Is Too Far Behind! and Seirei Gensouki all have Vol. 1s drop this week. (They’re not on Kindle or Nook because of various reasons, but are on all other digital platforms.) 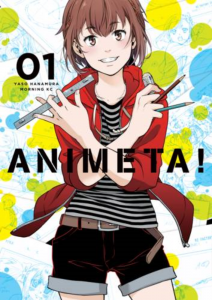 Next week the big digital debut is Animeta!, a Morning Two title (always a good thing) that isn’t based on a light novel (even better) about a girl trying to be an animator. I want to read this.

MICHELLE: That sounds potentially good! I await your review!

SEAN: They also do have more manga adaptations of light novels, as we also see Ascendance of a Bookworm, Infinite Dendrogram, and The Master of Ragnarok and Blesser of Einherjar get Vol. 1s digitally.

And lest you think they’ve abandoned light novels, we see I Saved Too Many Girls and Caused the Apocalypse 14, Infinite Dendrogram 9, and Outbreak Company 9.

Kodansha has no debuts, but has a lot of stuff. That is coming out next week. I promise. Print? We’ve got Again!! 9, Happiness 9, and O Maidens in Your Savage Season 2.

MICHELLE: Again!! and DAYS for sure. I hang my head in shame that I haven’t yet managed to read the first volume of Saint Young Men. I really will, I swear!

ANNA: I am sad that I am behind on Again!! and Saint Young Men.

SEAN: Seven Seas has the print debut of Restaurant to Another World, which is very good but you’d better be a foodie.

ASH: I’ll be picking this up now that it’s coming out in print. It seems like it’ll be right up my alley.

Tokyopop has the 2nd Aria the Masterpiece omnibus and Yuri Bear Storm 3. You may have seen both these volumes in prior lists. Kodansha’s not the only one with surprise last-minute delays.

Vertical gives us a 3rd APOSIMZ. And the Inc. side has the 2nd omnibus (Vol. 4-6) of Katanagatari’s novels.

ANNA: Need to get caught up on Gangsta too!

ASH: Since I read the first edition of 20th Century Boys, it’s Gangsta and Golden Kamuy that have most of my attention from this list. 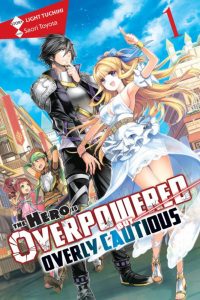 SEAN: Yen Press moved all but one of its manga debuts to the last week of June, but we do have one light novel debut. The Hero Is Overpowered But Overly Cautious is one of those “the title is the plot” books, but at least has a novel twist by having the hero not be the narrator – from what I understand it’s the summoner.

Also coming out on the novel side: Accel World 18, The Asterisk War 10, A Certain Magical Index 19, The Empty Box and Zeroth Maria 6, Is It Wrong to Try to Pick Up Girls in a Dungeon?: Sword Oratoria 9, My Youth Romantic Comedy Is Wrong As I Expected 7.5 (a short story collection), Re: ZERO 10, and Woof Woof Story 2.

On the manga side… let’s start with the news that not only do we get the 11th My Youth Romantic Comedy Is Wrong As I Expected manga, but we also get Vols. 1-11 digitally. The Shogakukan dam is breaking!

There’s also a yuri one-shot: Whenever Our Eyes Meet: A Women’s Love Anthology. The gimmick here being that the romances are office and workplace rather than middle and high school.

MELINDA: That does sound wonderful!

SEAN: And lastly (well, sort of… there’s a lot of lastly), we get As Miss Beelzebub Likes 6, Bungo Stray Dogs 11, Dead Mount Death Play 2, For the Kid I Saw in My Dreams 2, Goblin Slayer Side Story: Year One 2, Hakumei & Mikochi 6, Hatsu*Haru 7, Kakegurui: Compulsive Gambler 10, One Week Friends 7, Prison School omnibus 13, Silver Spoon 9, A Terrified Teacher at Ghoul School 7, and The Witch’s House: the Diary of Ellen 2.

ASH: You’re going to have a great time ahead of you once you get a chance to catch up! Silver Spoon is terrific.

MELINDA: Oh, hi, Silver Spoon, you own my heart and soul.

SEAN: Years ago I used to break these down one line per book. I am so glad I don’t do that anymore. What’re you drowning yourself in?