Bookwalker has the 9th volume of The Combat Baker and Automaton Waitress. 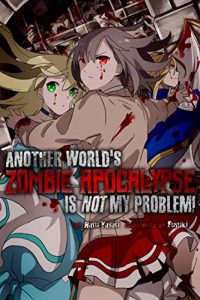 Cross Infinite World has another done-in-one light novel with Another World’s Zombie Apocalypse Is Not My Problem!. I haven’t read too many CIW titles, but I always enjoy them when I do.

Denpa has a 4th volume of Inside Mari.

ASH: Oshimi’s manga are always a fascinating mix of compelling and uncomfortable.

SEAN: From J-Novel Club, we have Demon King Daimaou 11, Der Werwolf 4, and Invaders of the Rokujouma!? 21.

Kodansha has a lot of titles. A whole lot. The print debut is I’m Standing on a Million Lives, which we’ve already seen digitally. It’s an isekai, which may explain why it got a print edition, and runs in Betsushonen.

They also have Gleipnir 2. Insert your own Electric Boogaloo joke here.

Digitally, there’s a lot more. All Out!! 10, All-Rounder Meguru 10, Asahi-senpai’s Favorite 3, Back Street Girls 11, Boarding School Juliet 10, Domestic Girlfriend 18, Elegant Yokai Apartment Life 13, Hotaru’s Way 9, My Boy in Blue 9, Tokyo Alice 11, and The Walls Between Us 6. So many series to say “whoah, I should read that someday but don’t have the time!” to.

MICHELLE: Yeah, at this point I just keep updating volume numbers on to the list of stuff I mean to read. I’ve seen parts of the animes for All Out!! and Elegant Yokai Apartment Life and enjoyed them, and then two of those titles—Hotaru’s Way and Tokyo Alice—are josei, which is obviously a big draw. It’s just a time problem! (I note that The Walls Between Us looks pretty cute, too.)

SEAN: One Peace has an 11th volume of the Rising of the Shield Hero manga. 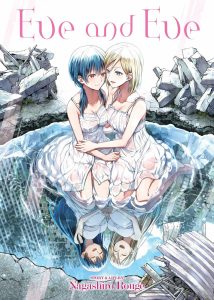 Seven Seas debuts Eve x Eve, a yuri anthology of short stories by the same author, which interconnect towards the end. It’s fairly explicit as these sorts of things go, and you’d better like magical yuri pregnancies, but it’s a good pickup for a fan of the genre.

ASH: I’m particularly interested in the speculative fiction aspect of the collection.

And Yen has the rest of the May lineup that didn’t already come out, as we get Forbidden Scrollery 7, Kakegurui Twin 2, Kiniro Mosaic 9, Shiboya Goldfish 4, Sword Art Online: Hollow Realization 3, Tales of Wedding Rings 6, and Trinity Seven 16.

SEAN: Nothing really groundbreaking (and I expect the Manga Bookshelf peeps to have trouble with Pick of the Week), but a wide variety. What seems good for you?