SEAN: Buckle up, kids, it’s another one of THOSE weeks next week.

Dark Horse debuts a new series in omnibus form, Elfen Lied. This one may actually be more familiar to older anime fans, as it had an infamous anime in 2004, and the manga is apparently just as noteworthy. It ran in Weekly Young Jump, and this has the first three volumes. It’s a brutal, violent, dark manga. But it has a lot of fans.

MICHELLE: I seem to recall hearing that a lot of amputations occur in this series, so that’ll be a pass for me.

ANNA: Yeah, amputations are not my thing.

MELINDA: I watched the anime way back and survived, so maybe? 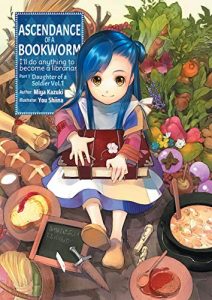 SEAN: J-Novel Club debuts Ascendance of a Bookworm (Honzuki no Gekokujou), one of the more begged-for LN license requests of the last year or so. The subtitle has “I’ll Do Anything to Become a Librarian!”, so this one may also appeal to the Manga Bookshelf folks too. A book-loving girl gets her dream job as a librarian… only to be killed and reincarnated in a fantasy world with low literacy. So to fulfill her dream of being surrounded by books, well… that’s the plot. I really want to read this. The print version is coming in the fall, but digital is out next week.

ASH: Perhaps because I’m a librarian, I really want to read this, too! I’m always interested in fantasy interpretations of my chosen profession. (I’ll probably wait for the print edition, though.)

ANNA: I am also interested in this as a librarian, but I tend to only like certain kinds of light novels. I’m definitely curious though!

MELINDA: This does sound kind of interesting.

SEAN: Kodansha, making up for two light weeks, has quite a bit next week. In print we have 10 Dance 3, Grand Blue Dreaming 6, Love in Focus 2, The Quintessential Quintuplets 3, and Yuri Is My Job! 3.

MICHELLE: Hooray for more 10 Dance! I did enjoy the low-key shoujo title Love in Focus, too.

ASH: 10 Dance definitely has most of my attention out of that bunch. Though, like Michelle, I also enjoyed the first volume of Love in Focus.

Seven Seas debuts an autobiographical manga by Akiko Higashimura, creator of Princess Jellyfish. Called Blank Canvas: My So-Called Artistic Journey (Kakukaku Shikajika), I reviewed it earlier this week, and it’s a must-read for fans of her work.

ASH: I got my hands on the first volume and it is VERY GOOD. I really love Higashimura’s work. 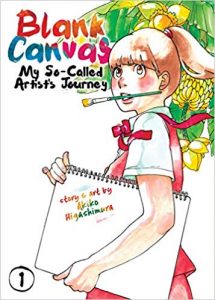 ANNA: OOH, this wasn’t on my radar at all.

Udon has a 10th Persona 4. We are apparently getting close to the end.

Vertical has the 4th volume of My Boy.

Viz has Children of the Whales 10, Mobile Suit Gundam Thunderbolt 11, Ooku 15, Ran and the Gray World 3, and Urusei Yatsura 2. I’m most interested in the last, but I know the MB team wants its yearly dose of Ooku.

MICHELLE: I do, but I’ll also be reading Uruseu Yatsura one of these days.

ASH: Yes, I need more Ooku! While I’m following a couple of the other series, too, Ooku is the priority for me.

ANNA: I’m excited about both Ooku and Uresei Yatsura.

SEAN: And now we have Yen. So much Yen. And not even all the Yen, as they delayed 7 titles to the week after next.

JY has the third and final volume of the Little Witch Academia manga.

Yen On debuts Torture Princess (Fremd Torturchen), which is (try to contain your surprise) where our hero ends up contracted to the title princess, who has to kill demons. The artist also does Black Bullet’s art. I hope this is slightly less bleak than Black Bullet.

In lighter fare, we also have Wolf Children: Ame & Yuki, whose manga already came out via Yen. It’s another in the ‘adaptations of movies’ line. 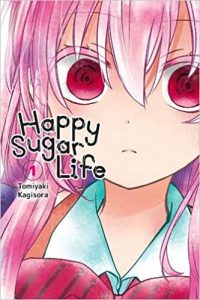 As for manga, the debut is Happy Sugar Life, which… I hate to use the word “yandere” in describing a manga, as it’s very over-and-badly used, but this series about a high school girls who falls for a sweet and pure kid and makes sure nothing gets in the way of their happy life, even if it means murder, probably justifies the term. It runs in Gangan Joker.

SEAN: Ending with its 7th volume is Shoulder-a-Coffin Kuro, a series which debuted in 2006 but has only just now reached its 7th volume, which tells you a lot about its erratic publishing history. I love each volume, though I must admit “will Kuro survive?” is my primary question.

In other Yen manga news, we have Angels of Death Episode.0 2, Anne Happy! 9, Chio’s School Road 4, Dimension W 14, Graineliers 3, Hinowa Ga CRUSH! 2, DanMachi Familia Chronicle: Episode Lyu 3 (manga version), Kiss & White Lily for My Dearest Girl 9, Laid-Back Camp 6, Overlord 10 (manga version, out the same day as Overlord 10 the light novel, no doubt causing Amazon to have an aneurysm), Re: ZERO Arc 3 Volume 7, and Though You May Burn to Ash 5.

ASH: That is a fair bit!

SEAN: Aside from everything, what are you getting next week?