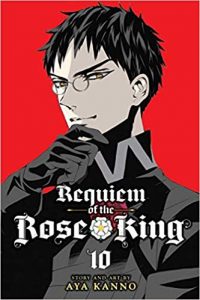 SEAN: Pretty much Requiem of the Rose King for me. It consistently amazes.

ASH: Like Sean, it’s Requiem of the Rose King for me, too. I’ve actually been saving up a few volumes to read all at once because I’m always wanting more after I finish one. It’s such a dramatic and engaging series!

MICHELLE: I think I’ll have to buck the trend and go with the final volume of A Strange & Mystifying Story. The series started out with a couple of problems but improved dramatically by its third volume. Ever since, I’ve enjoyed it quite a lot! It contains one of my favorite BL couples, and though there’s a dramatic cliffhanger in need of resolution it’s their fate I most want to see.

ANNA: Requiem of the Rose King is so special, it is my automatic pick of the week.

MELINDA: I can’t possibly choose anything but Requiem of the Rose King. I send my apologies to everything else!