SEAN: Sometimes one book sort of takes all the attention, like a black hole. We’ll do our best to mention everything else as well, though. 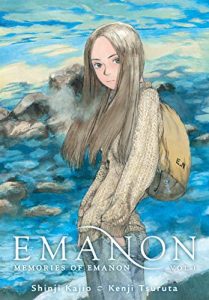 Dark Horse debuts Emanon, by the artist of Spirit of Wonder (anyone remember that series?) and based on an award-winning novel. It looks quiet and mysterious. It runs in Comic Ryu, so that may not be the case, but…

ASH: I’ve been enjoying Wandering Island, the creator’s other series in English, so I’ll likely be giving this one a look.

SEAN: They also have a World Guide for the NieR: Automata series.

J-Novel Club debuts Campfire Cooking in Another World with My Absurd Skill, another in a series of light novels whose plot is in its title.

They also give us I Shall Survive Using Potions! 2, Kokoro Connect 5, and Lazy Dungeon Master 5.

Kodansha does not have a debut, though the first week of the month is always dangerous to say that about – apologies if they announce something after I post this. In the meantime, in print we get Hitorijime My Hero 3.

And digitally there is Blissful Land 3, Can You Just Die, My Darling? 8, Momo’s Iron Will 2, and World’s End and Apricot Jam 4.

Seven Seas has, technically, other things out next week. Let’s actually mention those first. There’s the print debut of Classroom of the Elite, The Dungeon of Black Company 3, High-Rise Invasion 7-8, and Mononoke Sharing 4. 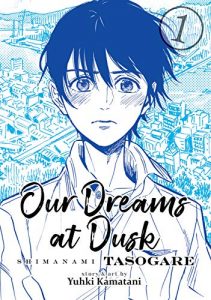 But no one cares at all, because they are debuting Our Dreams at Dusk: Shimanami Tasogare. One of the most highly anticipated manga debuts since I don’t know when (well, OK, since Saint Young Men two weeks ago), this manga deals seriously with LGBTA themes, contains superb writing and character work, and is highly recommended by everyone I know. I can’t wait to start it.

SEAN: Tokyopop has a third Yuri Bear Storm, which… is not quite the same sort of series.

Vertical has a 12th volume of Mobile Suit Gundam Wing.

I feel badly for Viz, as any other week I’d be falling over myself praising them for picking up Snow White with the Red Hair (Akagami no Shirayukihime), which has similar plot and characters as Yona of the Dawn but is its own delightful series. (And honestly, who wouldn’t want to be compared to Yona of the Dawn?). It runs in LaLa. 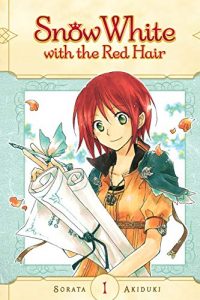 MICHELLE: I’ll read all of these eventually!

SEAN: On the shonen end we debut the new arc for JoJo’s Bizarre Adventure: Diamond is Unbreakable. Unlike other new arcs for JoJo’s, this has the same cast as the previous arc.

ASH: I am incredibly pleased that this is being released, especially since it’s a fancy hardcover edition.

Seriously, buy Shimanami Tasogare. I want to see it sell like hotcakes. What are you getting besides that?