Dark Horse gives us a 39th volume of Berserk, a series that without hiatuses might have 139 volumes.

ASH: Ha! That may be true. I still greatly anticipate this one, though!

SEAN: J-Novel Club has the 9th volume of guilty pleasure In Another World With My Smartphone.

Kodansha did it again, releasing their new digital manga press release just after I posted Manga the Week of. So, already released, we have I’m Standing on a Million Lives (100-man no Inochi no Ue ni Ore wa Tatte Iru), an isekai fantasy that runs in Bessatsu Shonen Magazine. The artist may be familiar for Psycho Busters. 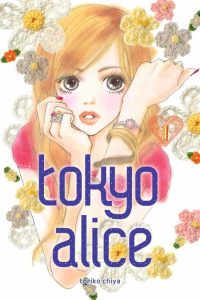 Meanwhile, next week’s debut is Tokyo Alice, a long-runing josei series from Kiss magazine that recently got a live-action series. The heroine is looking for love and looking to shop, possibly not in that order.

MICHELLE: I’m not especially into shopping, but who can resist long-running josei?

ANNA: Did someone say long-running josei!?

SEAN: Also digitally we have Kamikamikaeshi 2 and Starving Anonymous 5.

Print-wise, we have another digital debut that’s now getting a print release. Grand Blue Dreaming is a romantic comedy from the creator of Bakas, Tests and Summoned Beasts. It runs in good! Afternoon.

ASH: I’m curious about this one! What could possibly go wrong when mixing drinking and diving? (Plus, I’m always happy when one of Kodansha’s digital titles makes its way into print.)

SEAN: Amazon also tells me that there is an Attack on Titan Character Encyclopedia coming out next week, though I don’t see that on Kodansha’s site. Learn more about your favorite characters who are now dead. NOT THAT I’M BITTER.

Kiss Him, Not Me! comes to an end with its 14th volume. The series had its ups and downs, but overall I enjoyed it.

And there is a 7th Waiting for Spring.

MICHELLE: I always enjoy this series. 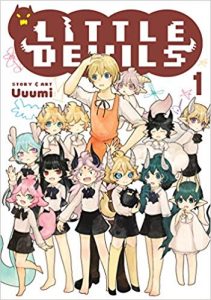 SEAN: Seven Seas debuts Little Devils (Maou Kyoudai), the latest in a long line of slice-of-monster-girl life. Or monster kids, in this case, as a hero has to raise demon children to become model citizens. It runs in Tokuma Shoten’s Comic Ryu, and looks more cutesy than pervey.

ASH: It does look really cute. I plan on giving it a try.

SEAN: There’s also a 7th print novel for Grimgar of Fantasy and Ash, a 2nd Sorry for My Familiar, and a 4th Spirit Circle. I’ll definitely be getting the last of those.

Lastly, there is Viz, which has a 67th Case Closed (still not over in Japan), and a 27th Rin-Ne (which has ended, but we have a long way to go to catch up.)

MICHELLE: I had no idea RIN-NE had ended! It makes me wonder if there was some actual plot there at the end.

SEAN: Not too bad, right? Which of these MANGA BARGAINS are you getting?