We’ll start off with the titles that are already out but were announced too late to be in last week’s column, which is unfortunately becoming a weekly occurrence. First off, Bookwalker debuts a new digital light novel, The Ryuo’s Work Is Never Done! This is a very popular series in Japan about a teenage shogi master who takes an elementary school girl as his apprentice. The prologue is jaw-droppingly appalling, but I am hoping for the best? Maybe?

MICHELLE: I thought I might check this out for a moment before I read some of the preview.

SEAN: Kodansha also has its digital horror debut, I Want to Hold Aono-kun So Badly I Could Die. Despite the title, not based on a light novel. It runs in Afternoon.

MICHELLE: I find this kind of intriguing, actually. It doesn’t appear gory, at least.

SEAN: Now on to next week, and it’s a killer week even based on the experience of previous killer weeks. Dark Horse gives us yet another Hatsune Miku manga spinoff with Future Delivery. 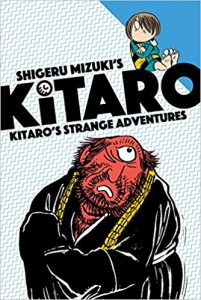 SEAN: J-Novel Club has *five* novels debuting next week, which I think may be a record for them. We have Clockwork Planet 2, Demon King Daimaou 3, Infinite Dendrogram 3, Invaders of the Rokujouma!? 7.5 (no, you’re reading that right, there’s a reason for the .5), and Paying to Win in a VRMMO 5. Phew!

Kodansha also has a GIANT PILE of digital coming out. In addition to whatever new horror title they debut next week, we have All Out!! 2 (more rugby!), Beauty Bunny 2, Black Panther and Sweet 16 3, DAYS 6, DEATHTOPIA 5, Drowning Love 3, Love’s Reach 4, and Peach Heaven 8. More titles to get behind on!

MICHELLE: Dang! I’m definitely keen on several of those.

SEAN: In print, the big release next week is the Akira 35th Anniversary Box Set. If you want a new, huge, handsome version of Akira, this is the title for you. Do Millennials remember Akira?

MICHELLE: Random note: years before it became a fandom word, there was a panel of a rat in Akira who had the dialogue, “Squee.”

MELINDA: That rat was ahead of its time.

SEAN: Animal Land has its 2nd to last volume (13)! The last one is not yet scheduled because, well, y’know, Animal Land. But yay anyway!

ASH: I will be glad if we can actually make it to the end! The series ended up really growing on me.

SEAN: Fairy Tail has a 5th volume of its Master’s Edition, which tries to impress next to Akira’s box set but sadly comes in second. Which, well, Fairy Tail should be used to.

ASH: Ha! This probably is the edition to get for anyone starting to collect the series, though.

SEAN: Kigurumi Guardians gets a 2nd volume. The first was very… strange. I wonder what direction it will go.

MICHELLE: I need to read these!

SEAN: That Time I Got Reincarnated as a Slime also has a 2nd manga volume, as we wait for December to see the light novel. 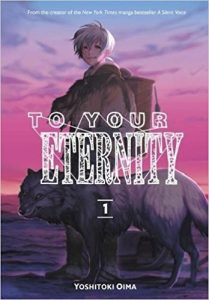 SEAN: The big debut from Kodansha is To Your Eternity, the new series from the author of A Silent Voice. I’m hoping for big things! It runs in Weekly Shonen Magazine, and is far more supernatural than her prior series.

ASH: I am definitely looking forward to this one. The artwork is beautiful and the story devastating, from what I’ve heard.

SEAN: Seven Seas has the first of its releases in the Devilman franchise with Devilman Grimoire. This remake of Devilman ran in Champion Red Ichigo, and all I can tell you is try not to get too attached to the characters.

ASH: That seems to be fair advice.

The Girl from the Other Side: Siuil A Run has a 3rd volume of vaguely heartwarming, vaguely disquieting beauty.

MICHELLE: I am looking forward to this very, very much.

ASH: Same. The Girl from the Other Side is a tremendous series.

SEAN: Seven Seas’ big release next week (sorry, Devilman) is In This Corner of the World which is coming out as one big omnibus. Old-timers may recall that J-Manga released some of this series digitally, but here it is in print. It ran in Futabasha’s Manga Action, and is from the creator of Town of Evening Calm, Country of Cherry Blossoms.

ASH: I’m planning on picking this one up. I actually still need to see the anime adaptation, too.

SEAN: Speaking of omnibuses, Vertical Comics has the first in their omnibus re-release of The Flowers of Evil.

And now it’s time for Yen. Amusingly, this list was originally larger – some titles are delayed due to shipping issues with the recent storms, and so be prepared for a pile of Yen every week for the next few weeks. This is a REALLY big pile even so, though.

Digital? We have you covered. There’s Corpse Princess 13 and Saki 12. There are also digital editions of Accel World and The Irregular at Magic High School’s light novels, being released in chunks to catch up ASAP. We get Accel World 1-4 and Mahouka 1-2. 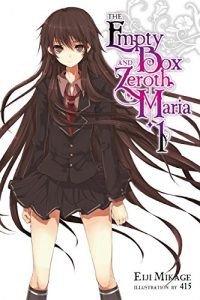 On the light novel front, Yen On debuts a new series, The Empty Box and Zeroth Maria. This is somewhat unique as, like Psycome, it does not seem to have a manga or anime attached to it but was licensed anyway. It seems to involve time loops – which we know Western fans LOVE after Endless Eight.

SEAN: On the light novel front, Yen On debuts a new series, The Empty Box and Zeroth Maria. This is somewhat unique as, like Psycome, it does not seem to have a manga or anime attached to it but was licensed anyway. It seems to involve time loops – which we know Western fans LOVE after Endless Eight.

Debuts from Yen Press next week are Gabriel Dropout, a Dengeki Daioh comedy about Angels down on Earth, Hybrid x Heart Magias Academy Ataraxia (Masou Gakuen HxH), which is another very ecchi title set at a magical school, based on a light novel (which Yen doesn’t have). There’s also a new spinoff debuting with Danmachi: Sword Oratoria’s manga debuting.

Ending next week is The Disappearance of Nagato Yuki-chan with its 10th volume. You can see what I said about this in my review here.

The rest we’ll divide into two: manga based on light novels and manga that is not. For the former, we have the 11th A Certain Magical Index; 2nd Grimgar of Fantasy and Ash; 4th Overlord; two Re: Zero volumes with the 3rd volume of the 2nd arc and the first volume of the 3rd arc; and the 4th in the Sword Art Online spinoff Girls’ Ops.

ASH: It’s such a great series.

SEAN: And there is the 6th Shoulder-a-Coffin Kuro, which I love so much it gets kudos away from the group.

I compressed this list a lot, and it still looks long. And remember, Yen delayed 9 titles to the week after! What are you getting next week?