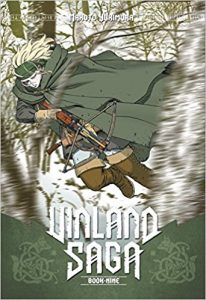 SEAN: I’ll be honest, most of my attention this week is focused on novels, what with Combat Baker and Nisemonogatari. But I picked a novel last week, so this week my pick is Land of the Lustrous, a new Kodansha series with gem wars but sadly not Steven.

MICHELLE: I’m looking forward to the second volumes of series whose debut volumes I liked a lot. Ordinarily, I’d pick Giant Killing, what with it being sports manga and all, but Flying Witch has an amusing kitty, and that gives it the edge this time.

KATE: I share Michelle’s enthusiasm for manga featuring cute animal sidekicks., but my vote goes to the digital-only release The Emperor and I, a comedy about a family living with an Emperor penguin. The story unfolds in short chapters of three to nine pages, so the formula isn’t as rigid as a 4-koma title; it feels a little bit like reading a collection of Sunday comic strips. Not sold? Here’s what I had to say about it back in May.

ASH: For me, my pick could be nothing other than Vinland Saga this week. The series has been consistently compelling from the very beginning. It’s also had great female characters from the start, but the most recent story arc allows the women in the series to shine like they haven’t before.

ANNA: I agree with Ash, I am very happy that new volumes of Vinland Saga are coming out after the series was paused for some time. It is rare for a series to combine great historical background with a truly compelling story and evocative art. Vinland Saga is my pick!