MELINDA: Heeeeey, look at this, it’s been less than two months and we’re already back again. That’s a huge improvement on our recent record, no?

MICHELLE: Considering that there was a two-year gap before our last column, I’d certainly say so!

MICHELLE: Hmm.. Here’s one! Why did the old lady fall in the well?

MELINDA: Wow, I don’t know! Why did the old lady fall in the well?

MICHELLE: She didn’t see that well.

MICHELLE: Your reaction was unanticipated!

MELINDA: Speaking of “unanticipated”… no, wait, this is totally anticipated. Wanna talk about some manga?

MICHELLE: Sure! I’ve just finished the third volume of Hiroaki Samura’s Wave, Listen to Me!, a Kodansha digital exclusive. 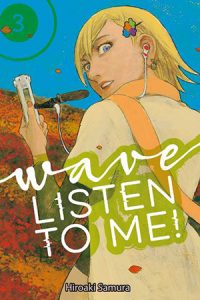 It’s the story of Minare Koda, a waitress with a gift of fluency that catches the attention of a local radio producer, Mato. After secretly recording her drunken rant about her thieving ex and playing it over the air, he eventually takes the chance of giving her her own weekly show in a late-night time spot where she has the freedom to do some really kooky things. The first episode, for example, is a surreal audio drama about murdering said ex, Mitsuo. The next week, it’s time to bury the body on Mt. Fuji!

In this volume, Koda finds that going through those crazy plotlines has actually helped her set aside her bitterness about how Mitsuo done her wrong, and she must think about what she wants the show to be going forward. I really like the scenes wherein Mato mentors her about radio and the relationship between host and linstener. “TV viewers are guests. Radio listeners are participants,” he says at one point. This proves to be true when one of her listeners sends a fax that leads ultimately to the discovery of… well, perhaps I’ll play coy about its exact nature, but it definitely proves that reality is sometimes stranger than the occult.

Minare is a fascinating character. Full of energy and charisma, capable of selfish acts that she’s later thoroughly horrified by… She finally found a goal in life and she’s going for it, but doesn’t exactly know what she’s doing. I like her very much.

MELINDA: Okay, I gotta admit this sounds fantastic. It reminds me a little of a time when I played a lot of Quake so that I could imagine I was repeatedly blowing up my ex, only much more creative and generally productive. Is this series as delightful as it sounds?

MICHELLE: It’s delightful, but it’s also really a genius concept, since letting Minare do many things in many genres allows Samura the same liberty. So, on top of watching Minare’s skills and career progress, there are also wacky happenings to enjoy, too. I very heartily recommend it.

MELINDA: It’s hard for me to resist a Michelle recommendation, especially when it is something so obviously up my alley. You especially got me at “reality is sometimes stranger than the occult.” I mean… I have to know more. I just have to.

MICHELLE: Oh, that reminds me of another fun aspect… because Samura has already drawn out a couple of the audio dramas as if they’re actually happening, when strange things start to happen, it made me question whether he might have started another one without telling us. This is the sort of manga that would totally do that.

Anyway! What have you been reading lately?

MELINDA: I’ve been reading the first volume of Gengoroh Tagame’s My Brother’s Husband, just released by Pantheon Books. If, like me, you’re primarily familiar with Tagame’s work as a bara artist, this slice-of-life seinen manga is certainly a departure, but it feels so natural in his hands, you’d never know that it wasn’t a genre he’s always drawn. 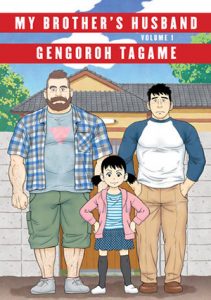 Yaichi is a single dad, earnestly raising his young daughter, Kana, whose life is upended by the arrival of Canadian visitor, Mike, husband to Yaichi’s estranged twin brother, Ryoji, who has just passed away. Yaichi greets Mike with awkwardness and not just a little homophobia, but is forced to invite him to stay after Kana, blissfully unaware of her father’s discomfort, insists that he must be welcomed into their home. Mike, stricken with grief, but anxious to connect with Ryoji’s family and childhood, gratefully accepts Yaichi’s grudging hospitality and settles into Ryoji’s old room.

As the manga continues, we watch Yaichi confront his preconceptions about Mike (and gay people in general), with considerable nudging from Kana, who adores their new houseguest. It’s rough going at first, but as Yaichi gets to know the man who so deeply loved his brother, he is increasingly able to see past his prejudices, to the point that, by the end of the volume, he’s defending Mike’s snoring problem to Kana and fighting the desire to rage at a neighbor who declines to let her child visit Kana’s house, fearing “negative influence.”

True to expectation, this is a pretty moving manga, made all the more poignant by its quiet, slice-of-life atmosphere, The artwork and visual storytelling are downright adorable, as somehow Tagame has managed to create something that wouldn’t look out of place on the shelf alongside, say, Yotsuba&!, without sacrificing his own artistic sensibility. But, of course, it’s not the artwork that makes this book so important.

As a westerner, I’m always wary of imposing my own cultural expectations on books like this, and I’m very much aware that queer culture in Japan is as different from what I’m accustomed to here as is Japanese culture in general. And with that in mind, it’s pretty great to know that a series like this was run in Monthly Action, which, despite its “indie” aspirations, is clearly aimed mainly towards straight men (so many boobs, my friends, so many). Perhaps because of that, it was difficult for me to warm to Yaichi, who is obviously intended as the stand-in for the reader, in all his discomfort over the concept of gay people and how he’s supposed to interact with one. Watching Yaichi’s progress is painful and, yes, eventually heartwarming, but what is most striking to me, as a reader, is Mike’s patience, kindness, and general agreeability throughout. Watching this sweet, hulking man smile with gratitude in every moment, even when he’s being treated with barely-concealed suspicion, is just… heart-wrenching. I can only imagine how this must read for someone who has experienced the same.

MICHELLE: Oh, man. I knew the general premise of this but not that Yaichi would be quite so awful at the outset. And it’s bad enough that Mike’s being treated this way, but when he’s grieving and so desperate for any scrap of his beloved that he’ll take it. From how you describe him, it doesn’t sound as if Mike tries to stand up for himself at any point.

MELINDA: I feel like I should rephrase, perhaps… I mean, yes, from my perspective Yaichi is being awful, but that’s where my western perception is failing me, I think. I think we can all agree, however, that what’s astonishing and awesome about Mike (also a westerner) is that he seems to be naturally accounting for differences in culture, and is just ceaselessly kind and giving. And when Yaichi becomes moved by that, it is what really changes his perspective, perhaps even more than Kana’s influence.

There’s obviously a lot more here, too, than just Yaichi overcoming homophobia. We find out a little about his estrangement from his twin brother and also about how his own marriage broke down, and I think in the end he and Mike are going to be strong healing influences for each other, and probably also for Kana, who didn’t even know she had an uncle!

MICHELLE: That does sound reassuring. I’m about to begin reading My Brother’s Husband this evening, in fact, so I’ll do my best not to get too riled up. Especially since I’m so very grateful that Pantheon has brought it to us!

MELINDA: Oh, go ahead and get riled up! But I really think you’ll love it in the end. It’s one of my favorite manga I’ve read so far this year.

So, we also have a mutual read this week… do you want to do the honors?

From Rei Toma, whose Dawn of the Arcana I liked and also featured a protagonist whose unusual red hair is viewed with suspicion, comes The Water Dragon’s Bride. 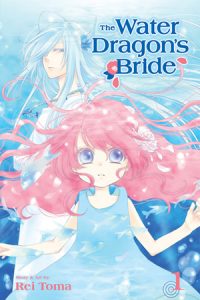 Asahi is spending a pleasant afternoon with her parents and she’s just about to go in and have some cookies when the backyard pond reaches out and ensares her, transporting her to another world. There, she meets a friendly boy named Subaru who unfortunately has some very ruthless parents, who immediately decide to offer Asahi to the water dragon god to obtain prosperity.

Asahi meets the dragon god who is, of course, a bishounen. He decides she’ll do for entertainment and shows off various tricks, but she’s unimpressed and protests so much that he steals her voice, promising to return it when she becomes his bride. Subaru mounts a valiant rescue, but the villagers prove to be just as crappy the second time around and the god decides to intervene.

MELINDA: That’s about the size of it! So. Okay. Honestly, I’m having a hard time coming up with a lot to say about this series so far. It’s definitely kind of adorable. Asahi is a spunky, likable heroine. Subaru, the obvious love interest, is sweetly earnest, and the bishounen water dragon god is pleasantly crusty. But man… haven’t we read this book before? Like a thousand times? Am I too much of a bitter, old schoolgirl-in-another-land fogey to enjoy this… again?

MICHELLE: It was certainly a very lightweight volume! I do think there’s potential, especially in the character of the water god. He’s cold, distant, and uncaring. At one point he simply watches as she wastes away in starvation. And he only intervenes at the end to preserve his entertainment. I’m sure he’ll feel love eventually, since that sort of thing always happens, but he’s definitely the most interesting character so far. Too, at least with the fish imagery and the pond, I had a little bit of Moon Child feels, and that’s always welcome.

MELINDA: I hadn’t thought about Moon Child, but I can see where you’re coming from, though the artwork isn’t nearly as beautiful as Shimizu’s, nor does it hold up well to what was the obvious comparison for me, Yun Mi-kyung’s Bride of the Water God, which, whatever you think of the series in general, I think is objectively visually stunning. Of course Bride of the Water God is a much more serious take on the sacrificial maiden theme, and Moon Child is weird and darkly whimsical like no other manga I’ve ever read. So it’s not really fair to hold this sweet little volume to either of those standards.

That said, I agree that the bishounen god has some possibilities (even if the long hair and excessive lounging just made me wish we were getting a new volume of Loveless anytime soon), and I expect there will be more substance as we go forward. But I kinda hope it hurries.

MICHELLE: Me, too! I did think of Bride of the Water God, but I although I did collect the volumes for a while, I never actually read them.

MELINDA: Well, perhaps this little manga will fare better on your shelves! I guess time will tell!

MICHELLE: I will least give it a few volumes to see how it fares. But it won’t assuage my sorrow that volume four of Wave, Listen to Me! is not even out in Japan yet.

MELINDA: That is a tragedy, indeed.