SEAN: It’s May, and a young man’s thoughts turn to … well, hopefully things other than manga. But if you want manga, we have you covered. 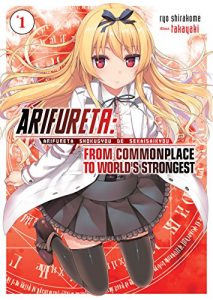 SEAN: We also have light novels covered. J-Novel has the debut of Arifureta: From Commonplace to World’s Strongest. It’s one of the most popular “isekai” titles out there, and unlike most examples of the genre we’ve seen lately, I think it plays it perfectly straight, for good or ill.

I was blown away by the readability of In Another World With My Smartphone, though I would not remotely call the book good. Vol. 2 is out next week, and I expect to be equally entertained.

ANNA: Well, things don’t have to be good to be entertaining!

SEAN: Kodansha has some more old Del Rey titles out digitally. Alive 14, Pumpkin Scissors 12, Yokazura Quartet 10… and sadly we can’t count down by 2s any more.

In new Kodansha digital releases, we have the 3rd All-Rounder Meguru and the 3rd (and final?) Museum.

In addition, Kodansha schnookered me with a last-minute title. The 3rd Wave, Listen to Me! is already out. I was not able to inform you a week ahead of time. I am filled with shame.

MICHELLE: But a hearty “Yay!” anyway.

SEAN: And in print Kodansha news, a 4th volume of Cells at Work!.

ASH: This series is ridiculous fun. And informative, too. 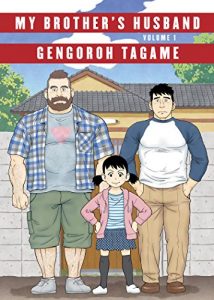 SEAN: I’ve been waiting for this one since it was announced. Pantheon has the debut omnibus of My Brother’s Husband, a manga by Gengoroh Tagame about a Japanese man whose brother passes away, and the brother’s Canadian husband then moves in with him and his young daughter. It runs in Fuitabasha’s Manga Action, and I believe just announced it’s finishing with 4 volumes, meaning we should get a 2nd omnibus at some point. Go get this release.

MICHELLE: So excited for this one.

ASH: This is absolutely one of my most anticipated releases for this year. I’ve been collecting the Japanese volumes, but I’m so excited that it’s being translated and will definitely be picking up the English-language edition.

MELINDA: So very much on board with this!

SEAN: Seven Seas has a quartet of titles, starting with the 10th Arpeggio of Blue Steel.

Dreamin’ Sun is their first debut, and any other week it’d be the title I’m most excited about. It’s by the creator of orange, and is the title she had success with before that one. It ran in Bessatsu Margaret, a Shueisha title. Yay, shoujo!

MICHELLE: !!!! How did I miss this?! I loved orange and usually love things that rain in Margaret or its offshoots. 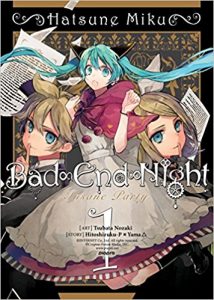 SEAN: Another Hatsune Miku spinoff comes out, as we get Vol. 1 of Bad End Night. This seems to be Hatsune Miku meets Alice in the Country of, and it ran in Zero-Sum Online.

And there is a 2nd volume of Magical Girl Site, no doubt featuring more dead young girls, because that’s what kids like these days.

Vertical has an 8th volume of Nichijou, and this is the volume where the plot really starts kicking in… OK, not really.

And the rest is Viz. Anonymous Noise gets a second encore… I mean volume.

ANNA: I find this title both entertaining and frustrating, but I keep getting drawn in by the stylish cover art.

ASH: I feel much the same.

MELINDA: Yep. I guess we’ll see if it gets less frustrating, eventually.

Guess what’s back from the dead? That’s right, D.Gray-Man, with its 25th volume out a mere 2 and a half years after its 24th.

And speaking of necromanced properties, we begin the release of Dragon Ball Super, taking place sometime after Z but before its epilogue, and apparently being more of a tie-in to the anime than anything else. Which is to be expected given it runs in tie-in paradise V-Jump.

SEAN: JoJo’s Bizarre Adventure continues its hardcover release of what is becoming its most boring arc, though I’ll keep trucking along. Have the 3rd Stardust Crusaders book.

ASH: Just you wait, Sean, things will start to pick up again. 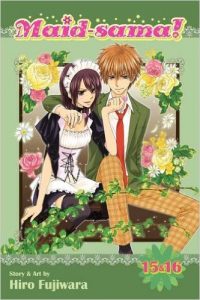 SEAN: Last time I said we got the penultimate Maid-sama! omnibus, showing I can’t count. Instead THIS is the penultimate volume, and I expect we’ll get the last in August.

MICHELLE: Actually, I had it in my head that the series was 16 volumes long, too, so you’re not alone.

SEAN: The 8th My Hero Academia will show off more Superhero School, as they try to pass their finals in the most awesome way possible.

Speaking of penultimate volumes, here’s the 2nd to last My Love Story!!. Just typing that is making me sad.

ASH: My Love Story!! has been such a treasure. I love the series so much.

SEAN: Nisekoi continues to trundle towards its ending as well with Vol. 21.

One Piece’s 82nd volume will hopefully tell us what’s going to happen to Sanji, though knowing Oda no doubt it will be drawn out.

Toriko has ended in Japan, and its schedule is slowing down here. This is the 38th volume.

MICHELLE: Someday I really will read this.

SEAN: And what would a list of Viz releases be without a Yu-Gi-Oh volume at the end? This is the 10th 3-in-1.

Do you feel the PASSION pouring through your veins? BUY SOMETHING FROM THIS LIST!