UPDATE: The CBLDF has since removed The Color Trilogy from its list.

It was a mistake. It was very obviously a mistake.

I’m always a bit leery of publicly criticizing institutions that generally deserve support. I’m aware of how damaging bad press really can be, and that mistakes are unavoidable when you’re running on a tight budget. So before I even state my complaint, I’d like to preface it with the fact that I know this was a mistake, and that nothing I’m going to say here is intended to undercut the importance of this institution and the work that they do. Are we clear on that? Okay.

So, when I say that I was thoroughly appalled to see the following in my Facebook newsfeed this afternoon, please remember that it is not my intent to belittle the Comic Book Legal Defense Fund or the important First Amendment work that they do.

I was thoroughly appalled to see the following in my Facebook newsfeed this afternoon. 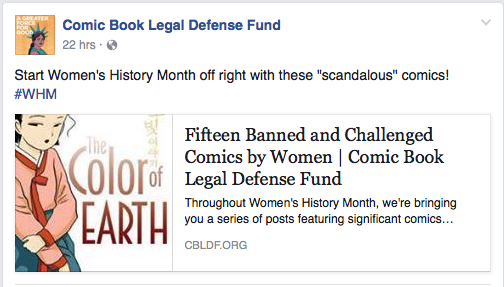 Those who are regular readers of Korean comics will recognize immediately that this post, originally entitled “Fifteen Banned and Challenged Comics by Women,” is accompanied by the cover image from First Second’s publication of The Color of Earth, the first book in the series commonly known as The Color Trilogy by a male author, Kim Dong Hwa. That the CBLDF realized their mistake at some point is clear upon clicking the link, where the title has been changed to “Fifteen Banned and Challenged Comics by or About Women.” The mistake, perhaps, was made by a blogger unfamiliar with “Kim” as a common surname and perhaps, too, the fact that Korean names (when they haven’t been deliberately switched around for western readers) are written surname first. But hey, the series’ main characters are, in fact, women, so one could make an argument that it is, as the revised title suggests “about women.” “Good save,” one might say, and move on.

I’m having a hard time moving on. Yes, it was a mistake. But, wow, it’s an unfortunate one. The post is intended to honor Women’s History Month by presenting a list of comics by (or about) women that have been frequently banned or challenged. It’s a noble cause to be sure. And, in his own way, the author of the series I think does believe he’s honoring women. But he does so from a perspective so steeped in male fantasies about what is good and beautiful about women, and SO thoroughly rooted in the male gaze, that it is, in my opinion, nearly the worst choice possible to appear on a list like this, let alone at #1.

It was a mistake, but really so avoidable, as even a search in the CBLDF’s own archives reveals that at least someone at the organization already knows that the book was written by a man. And while the series has gotten a lot of praise in the general comics press, a little jaunt through the manga blogosphere (which historically tends to include more female voices) reveals a less universally enthusiastic view. Here are a few from Manga Bookshelf bloggers alone:

Melinda Beasi (me) & Michelle Smith, Off the Shelf: MMF Edition

I think what you’re reacting to (and I mentioned this in comments, but I’ll reiterate it here) is not the story’s historical context, but the author’s own sexism which he reveals in the way he portrays the realities of the period. My immediate thought upon finishing the series was that I found it inexpressibly sad. Ehwa’s mother spends almost the entire series teaching her daughter about what a woman’s life is in their world and helping her learn how to endure a lifetime of waiting and heartache that can only be relieved by the companionship of a beloved man. And I suspect there is quite a bit of historical accuracy in this sense of utter helplessness and lack of worth placed on a single woman in that period.

… while it’s true that coming-of-age stories do tend to revolve around sexual awakening, it’s notable I think that though we experience Ehwa’s sexual development in meticulous detail, there’s very little attention given to the development of her romantic attachments. In fact, I’d say out of Ehwa’s romantic episodes, the one that’s best-developed is actually her early crush on the young monk. That’s played out very realistically for a crush–all shy meetings with a heavy spark, leading to lots of mooning about. By contrast, her true love story with Duksam is barely developed at all.

I think it’s partially this strong bias towards Ehwa’s sexual development that leads me to distrust the author’s feelings about women. He’s quoted as saying (in an interview at Newsarama), “I consider the process of a girl becoming a woman one of the biggest mysteries and wonders of life.” But he appears to regard that process as being primarily about sexuality. Not only are we shown very little in terms of Ehwa’s emotional development, but she never shows interest in really anything besides learning about sex and men, though she carefully remains a virgin throughout. That seems like such an exclusively male fantasy.

I’m not a cultural historian, so I have no idea what things were like for women in pre-industrial Korea. I just know that I don’t really care for its portrayal of “good” women as passive and patient, no matter how elegantly drawn it is. “I think that the process of a girl becoming a woman is one of the biggest mysteries and wonders of life,” the creator said in an interview. I wish he had thought harder about that mystery and hadn’t imposed what strikes me as such a male notion of wonder upon it.

Young Ehwa lives with her widowed mother, who keeps a tavern in the countryside. Mom advises Ehwa on womanhood, pounding in the notion of the woman as flowering shrub, patiently waiting and gently blossoming until a male pollinating insect will deign to settle upon her, and all will be well. Just look at Ehwa’s friend, the porcine Bongsoon, who actually lets curiosity lead to action. Bongsoon is less attractive than Ehwa, and her mother clearly isn’t giving her the lecture on the botany of desire or instructing her that true love waits. You can be damn sure that, should Bongsoon find a man stupid enough to marry damaged goods, birds won’t fly from the trees and every bell in the countryside won’t ring when that marriage is consummated. Bognsoon is an object of ridicule and contempt because she has the nerve to act on her desires.

Erica Friedman, The Color of Heaven

Laced heavily with unrealistic platitudes that are increasingly heaped upon our heads, many of them about the “lot of women,” I began to find the dialogue burdensome. Women, we are told, are plain trees in the winter that wait for a butterfly man to alight on our branches to adorn us. Waiting is punishment for women’s love. Women are, in fact, nothing without men. While the language is beautiful, it fails the Bechdel Test completely. The women do nothing but discuss men. As David Welsh so cogently summed it up, “not a fan of the notion that the power and mystery of women lies in their ability to wait for men.” When I read a few of these “us poor women” lines to my wife, she asked quite sincerely, if the mother hated her daughter. It was depressing to tell her that she did not, she was just indoctrinating Ehwa into life as a woman …

The series has a happy ending, which redeemed much of the “woe is us” feel of the early pages, but I absolutely could not recommend this book to a young woman…

Most likely, had this series not been mistakenly attributed to a woman by the CBLDF’s blogger, it never would have appeared on this list at all, and rightfully so. Though it’s a work worth discussing for both its flaws and its merits (and certainly none of us would suggest that it should be banned), it honestly has no place on a list that is intended to shine a light on books by or about women. Yes, the artwork is beautiful. Yes, the author is well-respected. But, at its core, it’s a series dedicated to male fantasy, not unlike a million other comics, and for that, not particularly remarkable.

It was a mistake. And it’s too bad.