SEAN: You know, for a 5th week of the month, there sure is a ton of stuff next week. Sheesh.

Dark Horse gives us the third Dangan Ronpa volume, as the class continues to choose between hope, despair, or being violently killed.

And there’s a 5th Oh My Goddess omnibus, warring with Dragon Ball for most re-releases. 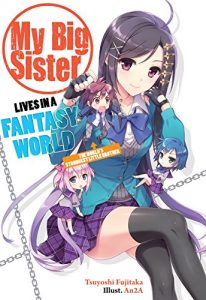 More obviously light novel-ey is My Sister Lives in a Fantasy World (Nee-chan wa Chuunibyou), a series about a boy who gains certain powers and his overenthusiastic little sister. It’s 7+ volumes in Japan.

And Occultic;Nine is the most familiar title, as it has an anime currently out, and should also be familiar with punctuation haters everywhere as the successor to Steins;Gate, Chaos;Head, etc.

Kodansha has five new releases this week. They say it’s six, but they still maintain that Animal Land 11 is actually coming out this time, and a ha ha ha, you can’t fool me again. Animal Land is a myth.

ASH: Animal Land? It has been a while!

The second volume of Happiness will likely be as ironically titled as the first one was.

SEAN: The Seven Deadly Sins has its 17th volume.

And there’s a 3rd Sweetness and Lightning, which so far has leaned on the sweetness.

ASH: I am really enjoying Sweetness and Lightning so far.

SEAN: We also have a 2nd volume of Welcome to the Ballroom, which I hope will be as dynamic and exciting as the first was.

MICHELLE: I’m really looking forward to this one, and will be picking up Sweetness, too.

ANNA: I am also very much looking forward to Welcome to the Ballroom.

SEAN: The 14th volume of Haganai from Seven Seas continues to move towards a potential breaking point with the Neighbors club. 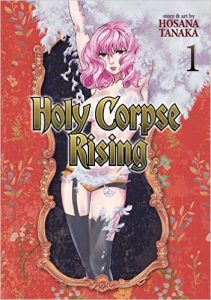 Holy Corpse Rising is a new series from the creator of Ninja Girls, and combines… I know this will shock you for a Seven Seas release… fantasy and fanservice.

ASH: I don’t know much about the series, but the cover art is striking.

Vertical; has an 11th volume of What Did You Eat Yesterday?, which is good, as I wondered what might get Pick of the Week at this rate.

MICHELLE: Heh. I will say I’m looking forward to Ballroom nearly as much.

MELINDA: Yoshinaga always has an edge where I’m concerned. You know I’ll be getting this.

ASH: I’m still so happy this series is being translated!

They also have some volumes left over from this week’s pile, as apparently there was too much so some got moved to next week. Anne Happy continues to try to rely solely on pluck with its third volume.

Scumbag Loser is a giant done-in-one omnibus of three volumes, and sounds intriguing, if you can get past the title and cover art, which I suspect most won’t. The author is also known for Tomodachi Game, a survival game manga.

MICHELLE: I’m taking a pass on Scumbag. That sort of creepy losery protagonist just doesn’t appeal to me. Like I’ll Give It My All… Tomorrow, for example.

As I said, that’s quite a lot. Anything for you?