SEAN: It’s the first week of October, so time for a BIG PILE O’ VIZ! But first:

Dark Horse has the first of what may be several Hatsune Miku manga tie-ins, Mikubon.

Seven Seas has a 5th volume of Golden Time, the one that’s not Toradora. 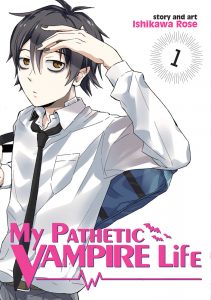 The debut this week is My Pathetic Vampire Life, which I know very little about besides that it runs in Futabasha’s Manga Action and hey, vampires.

SEAN: Since we’ve caught up with Japan, the 8th volume is the first My Neighbor Seki in a while from Vertical. It’s very welcome.

ASH: My Neighbor Seki continues to be a delight.

SEAN: And now for Viz. Assassination Classroom has its 12th volume, which I believe has a heavy dose of Irina.

And a third volume of Black Clover. What will it be imitating today?

There’s a 6th volume of The Demon Prince of Momochi House.

ANNA: I really like this series, it just keeps getting better and better.

SEAN: And a 14th Food Wars!, which may be starting a new arc?

Haikyu! has a 4th volume. It’s coming out so fast you’d think it was monthly.

ASH: … There may be a reason for that.

ANNA: I haven’t read volume 3 because my kids keep stealing it from me.

SEAN: And there’s a 4th volume of Honey So Sweet.

ANNA: Looking forward to this!

SEAN: I always love a new volume of Kamisama Kiss when it comes out, even now, at the 22nd volume.

ANNA: This is so great. There is totally room in my heart for two shoujo series with handsome male spirit people running around.

Kuroko’s Basketball has a 2nd omnibus, ensuring it remains caught up with Haikyu! despite being bimonthly.

ASH: Speaking of catching up, I still need to dig into Kuroko’s Basketball.

MICHELLE: Each of the last seven is on my list!

ASH: I love this series so much.

ANNA: It is just excellent.

And if you enjoy getting One Piece in massive box sets for Christmas, there’s a 3rd one here for you. 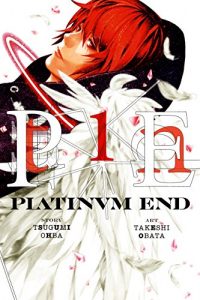 The debut this week is Platinum End, a new manga from the creators of Death Note and Bakuman that runs in Jump Square. I hear it’s more towards the Death Note end of the spectrum in terms of seriousness.

MICHELLE: I’m not generally interested in angels, but I’ll give this a shot.

ASH: I’m always willing to give a manga illustrated by Obata a try.

MELINDA: You know I’m on board for this, for the artwork if nothing else. Obata 4evah.

ANNA: I will try it for the art alone for the first couple volumes, even if I don’t care for the story.

SEAN: 7th Garden has a 2nd volume, which means only 5 more till I get to make an obviously lame joke.

ANNA: It is pretty cute, but maybe a bit too long?

SEAN: And a 6th Twin Star Exorcists. This month is big on series I don’t read, alas.

Lastly, a series I do read, the 2nd Yona of the Dawn. Love love love this.

MICHELLE: The second volume is even better than the first.

ASH: I’ve actually got a giveaway for the first volume going on right now. I can’t wait to get my hands on the second one!

MELINDA: Well, I’ll have to check this out!

SEAN: Is there a series here for you?