SEAN: The word for next week is “spinoff”, boys and girls. Can you say spinoff? I knew you could!

Kodansha gives us the 2nd and final volume of Fairy Tail’s Gray-related spinoff (can you say that, boys and girls?) Ice Trail.

And a 4th Inuyashiki, with far less skintight leather than Gantz had but just as disturbing.

Livingstone has a 3rd volume. I’ve heard it called “quirky”.

And there’s a 3rd Maga-Tsuki as well, for more romantic comedy shenanigans. 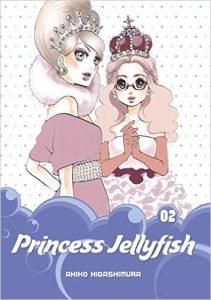 Lastly, and most importantly to the Manga Bookshelf team, Kodansha has a 2nd omnibus of Princess Jellyfish. Remember when getting this license was an impossible dream?

MICHELLE: Yay! I’m looking forward to this a lot.

ASH: Dream the impossible dream! Reach the unreachable star! (And then go buy Princess Jellyfish because it is wonderful.)

ANNA: Still thrilled this is coming out here.

SEAN: One Peace picked up, almost without anyone realizing it, the license to Maria Holic and are re-releasing it in omnibuses. Fans of fake yuri and traps are sure to want to get it.

MICHELLE: If only it had been Maria-sama ga Miteru instead!

SEAN: Seven Seas gives us an 11th volume of A Certain Scientific Railgun, the spinoff (can you say that, boys and girls?) to Index. It’s just finished a serious arc, so I suspect that things will be a lot wackier this time around.

And there’s also a 4th volume of Magika Swordsman and Summoner, which some people clearly enjoy.

Udon has a 3rd volume of Persona 4, the manga spinoff (can you say that, boys and girls?) of the game.

ASH: I liked the first volume, but I’ve already fallen behind. I should correct that.

SEAN: Vertical has a spinoff (can you say that, boys and girls?) novel that I know some people have been waiting for. Attack on Titan: Lost Girls gives focus to two of the most seemingly stoic of the cast, Mikasa and Annie.

They also have a 5th volume of the “totally created by Americans, honest” series Ninja Slayer.

Yen Press has a number of digital releases. New volumes for Aoharu x Machinegun, Black Detective, and Corpse Princess. The final volume of Grim Reaper and Four Girlfriends and Little Witches’ Collier. And a 4th volume of Saki, for the Manga Bookshelf folks.

MICHELLE: Hm. The fanservice was starting to get to me, but I do still have some interest in Saki.

SEAN: Yen On releases the 7th volume of A Certain Magical Index. Did you want more Roman Catholics in your Index? More nuns? What about a murderous military nun corps? Have I got good news for you!

Yen proper starts off with the 2nd volume of Akame Ga KILL! ZERO, another spinoff (can you say that, boys and girls?).

And Kaori Yuki shows us beautiful, beautiful death once more with a 4th Alice in Murderland.

Barakamon has an 11th volume. Is Handa really going to have an arranged marriage? Signs point to no.

Black Bullet has a 4th manga volume of child killers and glorious depression.

It seemed like Bloody Cross announced it was ending several years ago, but it continues onward with its 11th volume.

We have a 4th Devil Is A Part Timer! High School!!, with 3 exclamation marks worth of fun. It’s a spinoff (can you say that, boys and girls?). 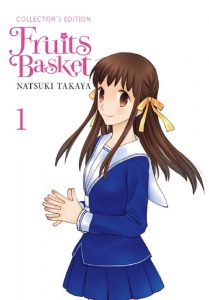 The big release this week is a re-release, as Yen is putting out Fruits Basket in omnibus editions. The first two, covering Vol. 1-4, are due out next week. I absolutely cannot wait to read this all over again. Who’s your favorite Souma? I’m partial to Shigure and his black, black heart.

MICHELLE: I am excite, despite already owning most of the series in Japanese and all of it from TOKYOPOP. I love the entire “Mabudachi Trio” very much, but have the warmest, proudest love for Yuki.

ASH: Glad to see this coming back, and in such a nice edition, too. I’m also rather partial to Shigure myself, but there are so many fascinating characters in the series.

MELINDA: These are absolutely beautiful, and I’m so excited to see them! I checked back into an old 3 Things Thursday to see what I said back then, and apparently I chose Momiji! I’ll stand by that! Looking forward to an epic re-read.

ANNA: Yay! I’m pretty resistant to buying series all over again, but I am so glad that Fruits Basket is back, this series deserves a wide audience, and I’m sure there are people who missed it the first time around.

SEAN: There’s a 3rd Handa-kun, which is the spinoff (can you say that, boys and girls?) to Barakamon.

He’s My Only Vampire is starting to lose me a bit, but I know it ends in a few volumes or so. Here’s Vol. 7.

MICHELLE: Yeah. I’m going to soldier on to the end, though. Hopefully it’ll make more sense than Kiss of the Rose Princess.

Third volumes galore! Here’s a 3rd for Of the Red, the Light and the Ayakashi.

SEAN: If you enjoyed the Overlord light novel, why not try the manga (does this count as a spinoff)? The first volume is out next week.

And Rose Guns Days ends its Season One with its 4th volume, although future seasons are coming.

Servant x Service has a 2nd omnibus which wraps up that series. It proved to be a lot more character-focused than I expected for a fluffy workplace 4-koma.

The other debut this week is Space Dandy, which was originally an anime but now has this manga spinoff (can you say that, boys and girls?). If you enjoyed Cowboy Bebop and Samurai Champloo, this is in the same vein.

And with that, my running gag has come to an end. What are you getting this week?