SEAN: It’s a 5th week in may this June 1st, but unlike most 5th weeks there’s a lot coming out. 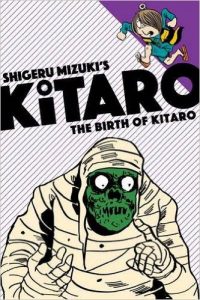 Drawn and Quarterly begins its series devoted to Shigeru Mizuki’s most iconic creation, Kitaro. They released a sampler a few years back, but this is a new multi-volume series that gives us the best Kitaro stories ever, as chosen by D&Q and approved by Mizuki himself before his death. I’ve reviewed it already, and it’s a must-read. Kid-friendly too, provided they’re OK with horror.

ASH: I am thrilled we are getting more of Kitaro! The yokai activities in the back of the book are great, too.

SEAN: Two series from Kodansha wrap up. The first is the busily titled Persona Q: Shadow of the Labyrinth Side P3, with its 2nd and final volume.

The second is one I care about more, the 7th and final volume of A Silent Voice. Will our two leads reconcile with their friends? Will there finally be romance, or does that even matter? And how do you live on after seemingly destroying everything? Find out here.

ASH: This series has impressed me from the very beginning, I’m very curious to see how it ends.

SEAN: Yamada-kun and the Seven Witches now has more volumes than witches with Vol. 8.

Seven Seas has several new releases, starting with the third volume of A Certain Scientific Accelerator, which has another Misaka clone needing to be rescued. They tend to get kidnapped a lot.

Franken Fran has its 2nd omnibus, featuring more humor, more horror, and more skeevy covers putting off North American readers from enjoying the humor and horror. But honestly, doing new covers and upsetting the hardcore otaku would also put readers off. No win?

MICHELLE: You know you’ve been thinking too much about Neko Atsume when you accidentally read this title as ‘Sassy Fran.’

SEAN: Non Non Biyori’s 4th volume continues to show us how, in a small country village, nothing ever, ever happens.

And we get the 2nd and final volume of orange, whose adaptation starts this summer I greatly enjoyed the first volume, and can’t wait to see how it turns out. Will history be changed?

MICHELLE: I have been waiting for this for so long!

ASH: As have I! The first orange omnibus is one of my favorite releases of the year, I’m hoping the second won’t disappoint.

ANNA: I can see I should actually read the first volume of orange!

SEAN: Vertical has the 2nd Seraph of the End novel.