SEAN: It is somewhat sad that with the huge number of manga out towards the end of every month, I can be relieved that there are “only” 33 titles out next week. Let’s plow through them.

Kodansha has an awful lot of stuff. There’s a 4th volume of that pesky Devil Survivor.

And Noragami is still sped up with its 12th release.

If you prefer 4 to 3, then the debut of Persona Q: Shadow of the Labyrinth Side P4 will delight you. I’ll be in the corner looking baffled. 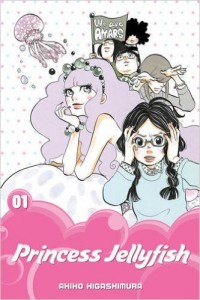 At long last, North America sees the debut of possibly the most anticipated josei title ever: Princess Jellyfish, which runs in Kiss magazine, gets an omnibus release, and it is fantastic. The Manga Bookshelf team would normally all pick it as Pick of the Week automatically, but see below. (FYI: PJ’s creator, Akiko Higashimura, has a younger brother, who happens to draw My Neighbor Seki.)

MICHELLE: I feel like I have been waiting for this for ages and ages. So excited!

ASH: Same here! (Also, I had no idea Akiko Higashimura and Takuma Morishige were related!)

MELINDA: So ready for this!

ANNA: I feel like I’ve been waiting for this FOREVER! Very much looking forward to reading this.

SEAN: Also debuting is Real Account, which is a survival game manga, and zzzzzzzzzzzzzzzzzzsnooooore – sorry, fell asleep there. Moving on.

MICHELLE: It can’t be worse than BTOOOM!, can it?

MELINDA: We shouldn’t underestimate it, Michelle. We should give it a chance to prove that it’s worse. It’s only fair.

SEAN: And a 7th volume of Yamada-kun and the Seven Witches. One volume per witch!

Seven Seas gives us a 5th volume of Servamp, which I believe still has vampires.

And Vertical has a 7th volume of Ajin, a series I know many people are excited about.

SEAN: Viz finally debuts the new shoujo title from the Vampire Knight creator, who has switched from Vampires to Ninjas with Shuriken and Pleats.

MICHELLE: I didn’t love Vampire Knight, but I’m still looking forward to checking this out.

ANNA: I will read this!

SEAN: And now it’s Yen time, starting with the Yen On light novel imprint. Accel World gets a 6th volume, as we try to figure out if our hero is going to turn possessed and evil or not.

The third Durarara!!, meanwhile, focuses on Masaomi, the third member of our high school power trio.

Log Horizon has a 4th volume, resolving the cliffhanger from the third, and possibly featuring Shiroe pushing his glasses up his face a few more times.

And there’s a 4th No Game No Life, which I wasn’t as pleased with as usual. I reviewed it here. 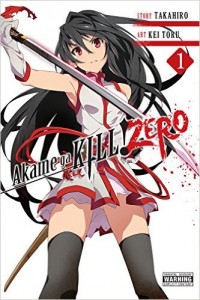 Akame Ga KILL! ZERO is the new spinoff series of the week, a prequel taking place a few years before the main series and focusing, appropriately enough, on Akame.

There’s a third Black Bullet manga, with plenty of disturbing yet well choreographed loli assassin action for you.

Bloody Cross nears its end, but isn’t there yet, even as we hit double digits with Volume 10.

And we get the 2nd to last volume of Chaika the Coffin Princess as well, which is sadly far below the most important coffin carrying manga this week. More later.

Demon from Afar must have run out of cast members, as the 6th volume is its last.

So The Disappearance of Nagato Yuki-chan has resolved its main romance, and has finished promoting its anime. It has to wrap up soon. Right? Right?

He’s My Only Vampire is only half finished, but I’m enjoying it more than Shouoto’s other titles, and so I look forward to Vol. 6.

MICHELLE: Same here, though Demon Prince of Momochi House is pretty pleasant, too.

SEAN: The second The Honor Student at Magic High School continues to tell an alternate viewpoint of the novel we haven’t quite gotten to yet.

And if you enjoy seeing a girl attempt to do life correctly and fail constantly, you no doubt are already aware that No Matter How You Look At It, It’s You Guys’ Fault That I’m Not Popular!! has an 8th volume next week.

And if you enjoy pretty supernatural people, have a 2nd Of The Red, the Light, and the Ayakashi.

MICHELLE: Yay! Volume one was a surprise delight!

MELINDA: Hm, I guess I should check out that first volume! 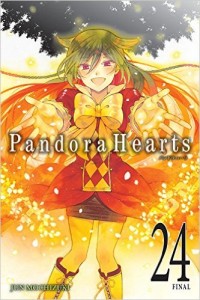 MICHELLE: Oh, man. Well, I’m pretty sure where Melinda’s heart lies, but I am less committed.

SEAN: And a third Prison School volume, which I think will give readers all the excess bodily fluids they could possibly want.

ASH: And then some, most likely.

SEAN: Rose Guns Days has a third volume of its Season 1 arc.

The only coffin manga that matters next week, we finally see a 5th volume of Shoulder-a-Coffin Kuro. Yay!

Spice & Wolf has a 12th manga volume, and for those who want to catch up with the series, 1-12 will also now be available digitally starting next week.

Sword Art Online begins the Mother’s Rosary arc, despite having just started the Phantom Bullet arc as well. The series ran at the same time in Japan, and will do so here as well.

Lastly, there’s a 4th volume of Sword Art Online Progressive’s manga, featuring Argo!, and also those other two I guess.

Even if you don’t get a lot of manga, there’s STILL a lot to get next week. Can you keep up?

MICHELLE: Not really, no!