SEAN: There’s one title I’m really excited about next week, but there are several other books of interest. Let’s go through them, starting, as ever, with Dark Horse. (If a manga company started beginning with A-C, they’d clean up.) 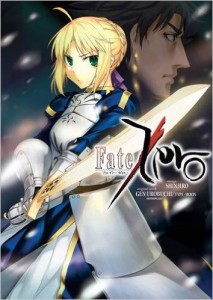 Fate/Zero is a prequel to the insanely popular visual novel franchise Fate/Stay Night, taking place 20 years prior. It still has Saber (Arturia version) in it, though, no worries.

If you missed it the first time, there’s a 3rd Kurosagi Corpse Delivery Service omnibus, with Vol. 7-9.

ASH: Still a great series; glad that Dark Horse found a way to keep it in print!

SEAN: Vampire Hunter D has reached its 23rd novel. I think Dark Horse put out the first one in 1922 or something like that.

SEAN: One Peace has a 3rd volume of the light novel Rise of the Shield Hero.

Seven Seas gives a 9th Dragonar Academy, which continues to attempt to titillate its core audience, and while I am not remotely that, I hear it does a good job.

It may surprise some to see me getting so excited about a “monster girl” series, particularly given my ambivalent attitude towards their recent popularity. But Franken Fran is not just any monster girl series . Fans have been waiting for its blend of grotesque horror and pitch-black humor to be licensed for years, and Seven Seas now obliges us with 4 big omnibuses, of which this is the first. Get this, folks (well, over-18 folks).

ASH: This is the series I’m most intensely curious about this week.

SEAN: I missed another one last week: there’s a 2nd digital-only volume of Crown of Thorns, by the Hana Yori Dango author.

MICHELLE: I’m not sure Franken Fran is for me, but I’m definitely excited about more Crown of Thorns!

ANNA: ACK! I forgot to get the first volume of Crown of Thorns! Oh well, it is an excellent excuse to binge-read!

SEAN: Tokyo Ghoul’s 5th volume, out next week via Viz, will sell more copies than all the other titles in this list combined.

ASH: I’ve fallen behind on the series, but I’m happy to see it doing so well for Viz.

SEAN: And there’s a 3rd Ultraman, also from Viz, which I really should know more about than I do.

Go get Franken Fran. What else will you get?