SEAN: Traditionally, the first and fourth weeks of the month are the largest, as Week 1 is where Viz releases it’s Jump and Beat titles, and Week 4 is usually Yen Press. Weeks 2 and 3 therefore vie for the remaining attention, containing less spectacular stuff – Viz puts out Sunday imprints in Week 2, but otherwise it can be a hodgepodge. (Week 3, to complete the analysis, is Viz’s Signature stuff.) Is there anything vying for attention in next week’s small batch?

Dark Horse gives us an 11th volume of its Lone Wolf and Cub omnibus.

ASH: I’m finally making a point to get caught up with Lone Wolf and Cub; it’s a really great series.

SEAN: Seven Seas has a trio of releases. Arpeggio of Blue Steel is a cut above the usual ‘girls are ships/planes/whatever’ genre, and I look forward to Vol. 6 next week. 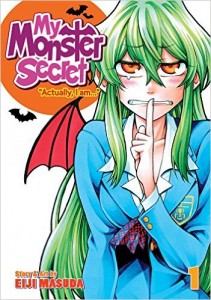 The words “monster girls” may cause the entire Manga Bookshelf team to groan, but the debut of My Monster Secret from Seven Seas is intriguing – people I trust have told me it’s very funny and well-written. It’s from Weekly Shonen Champion, also home to Yowamushi Pedal, which it resembles not at all.

And we have a third Pandora in the Crimson Shell: Ghost Urn, which… yeah, I can’t, really. I do hear it has an anime soon.

SubLime has an 8th volume of His Favorite, whose covers always look great, and has some fans here, I think.

ASH: That it does!

SEAN: Viz gives us 57 varieties of Case Closed, one for each volume it has out to date.

There’s a lot of fun stuff in the first half of the 12th Ranma 1/2 omnibus – including the famous “fishing rod of love” story – but let’s be honest, old-school fans will mostly want to read this for Herb. He shows up in the 2nd half.

Lastly, and thankfully for Manga Bookshelf writers desperate for a Pick of the Week, there’s a 3rd volume of Requiem of the Rose King, which is still in the Henry VI plays but possibly not for much longer.

ASH: Definitely the one volume that I’m most looking forward to this week!

ANNA: This is the ONLY volume I’m looking forward to this week!

MELINDA: Okay, this is probably predictable since I actually chose this series as my Pick of the Year, but: ME, me, me me me. Me. Yes, me. Me, too.

SEAN: What whets your appetite for next week?