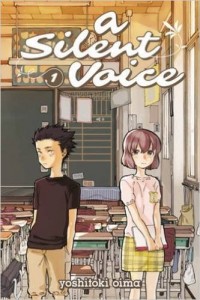 SEAN: It’s been a big year for manga in 2015, as the market continues to recover and companies are pumping out more titles than ever. Seven Seas, who were seemingly near death 4 years ago, are pushing all the monster girls you could possibly want. Yen On is putting out so many light novels that my own website is seemingly now only half manga, as I can’t really squeeze a novel into a Bookshelf Brief. Vertical continues to choose wisely and well. Viz is, well, Viz. That said, when I was pondering what my manga of the year would be I kept coming back to only one choice, a Kodansha release starting in April that has really taken off beyond the usual market: A Silent Voice, by Yoshitoki Oima. Though its realistic take on bullying, abuse and disabilities can be hard to take sometimes, that’s not due to lack of quality but sheer emotional rawness. It’s also not afraid to show the cruelty of children, and then turn around and explain exactly why they’re being cruel. It’s my 2015 must read.

Worst moment of 2015: Wandering Son going ‘on hiatus’ at Fantagraphics due to poor sales.

MICHELLE: I’ve been thinking hard about my pick of the year this week. My initial instinct was to say “the publishers,” because man have there been a lot of fabulous licensing announcements recently! Kodansha and Princess Jellyfish, Udon and The Rose of Versailles, Yen Press and Twinkle Stars, VIZ and Kuroko’s Basketball, Vertical and FukuFuku: Kitten Tales… Everyone has something I’m really looking forward to for 2016!

As for 2015, I think I am ultimately going to have to pick Yukarism by Chika Shiomi (VIZ). I wasn’t quite on board after its first volume (a 2014 release), but in 2015, the series fully won me over. Emotional, tense, woefully short but thankfully devoid of filler, with fascinating character revelations and a satisfactory conclusion… I’m going with Yukarism this year!

Runners up: Fumi Yoshinaga awesomeness in the form of What Did You Eat Yesterday? and Ooku: The Inner Chambers, the over-the-top ridiculous fun of Food Wars!, and Kodansha’s Dessert titles My Little Monster and Say I Love You.

Worst moment of 2015: Two too many shoujo manga about overweight girls who suddenly lose the weight and become thin, gorgeous, and newly desirable. 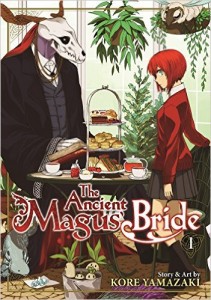 ASH: For the last two years I’ve cheated a little bit by picking a publisher rather than a specific manga, so I’ll keep with that tradition. This year it was Seven Seas that particularly caught my attention as it continued to increase and expand its catalog at a remarkable rate. I’m not especially interested in most of Seven Seas’ fanservicey titles, but I am grateful for their success as it has allowed the publisher to pursue some more unusual series. I count some of those atypical manga, like The Ancient Magus’ Bride and Haven’t You Heard? I’m Sakamoto, among my favorites of 2015. I’m curious to see what other hidden gems Seven Seas will present us with in the coming year.

Runners up: If I had to chose just one series, it would likely be A Silent Voice for all of the reasons that Sean has already described. The dark and dramatic historical fantasy Requiem of the Rose King is another personal favorite that just gets better with each volume and Chromatic Press/Sparkler Monthly continues to find amazing creators to work with.

Worst moment of 2015: Echoing Sean here again, but I will be absolutely heartbroken if the eighth volume of Wandering Son is the last to be published in English. Likewise, Vinland Saga, another incredible series, may be in trouble, too.

ANNA: I agree that a worst moment of 2015 is Vinland Saga going on hiatus. Highlights of 2015 for me include the print edition of One-Punch Man and the start of Requiem of the Rose King. When I think about the standout releases of 2015, my thoughts turn to lavish hardcover editions. Vertical deserves kudos for wrapping up the great release of Gundam: The Origin. But the manga that left the deepest impression on me in 2015 has plenty of random rock band references, punching, and almost too much manliness to fit within the confines of a book. It might seem a bit odd from such a staunch shoujo fan, but my pick of the year is JoJo’s Bizarre Adventure: Part 1 — Phantom Blood.

MELINDA: I’m on board with so many of my colleagues’ picks here, and even though I haven’t been on top of as many series’ as in previous years, the ones I’ve followed closely have been a real treat. I rather wish I could give this year’s nod to Sirial’s incredibly charming Milkyway Hitchhiking, one of my first picks this year, and still the owner of a major chunk of my soul. Alas, though I read the first volume in 2015, it was released near the end of the year before. On the other hand, that gives me room to shine some glory on Aya Kanno’s Requiem of the Rose King. It may not be the greatest masterpiece released in 2015, but it’s won my heart completely, with its heady mix of creative history, gender confusion, and beautiful artwork. My one regret over Kanno’s Otomen was that in all its gloriousness, it never really went anywhere, but that can’t be said at all about Requiem of the Rose King. It’s Richard III meets After School Nightmare, and has got me hooked only like such a strange marriage ever could. Aya Kanno and Viz have found the key to my heart.

Runners up: the totally charming My Neighbor Seki; Yukarism, for all the reasons Michelle has highlighted above; the re-release of the incomparable JoJo’s Bizarre Adventure; and hey, I’ll jump on the Fumi Yoshinaga bandwagon as well, as both What Did You Eat Yesterday? and Ooku have remained strong in my heart; also, Pandora Hearts, my love never dies, even with a year between releases.

Lastly, I’ll join the crowd in mourning the hiatus of Wandering Son, a favorite of mine and of the Battle Robot in general. That’s a difficult blow to take, both for readers and for Fantagraphics.