SEAN: Dark Horse has a the 2nd Astro Boy omnibus out next week.

And also the 4th volume of CLAMP-ish supernatural mystery Blood-C.

Lastly, they have another omnibus of Kurosagi Corpse Delivery Service, which is an absolute must-read if you haven’t already.

ASH: So glad Dark Horse found a way to keep this in print!

SEAN: Kodansha has a huge pile of things. Starting with the ever popular Attack on Titan, we get the 6th volume of serious-minded Before the Fall.

And if you like your Titans sillier, there’s a 4th omnibus of Attack on Titan Junior High.

MELINDA: To be fair, actual junior high is pretty ridiculous, too. 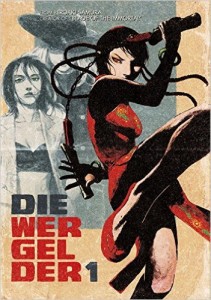 SEAN: A new debut from the creator of Blade of the Immortal, Die Wergelder runs in the magazine Nemesis and is rather violent and adult, I hear.

ASH: Violent and adult, that sounds about right for Samura!

SEAN: Fairy Tail has a new spinoff, Ice Trail, which focuses on Gray. Asd with most spinoffs, it’s by a different artist with plotting from Mashima.

There’s a 4th volume of The Heroic Tale of Arslan, drawn by the creator of Fullmetal Alchemist.

MICHELLE: I bought volume one but haven’t gotten around to actually reading it.

MELINDA: As a huge fan of Arakawa, I’m ashamed to say I haven’t read this at all, though I admit what I *really* want is a new story actually written by her. The art is only half the draw for me.

SEAN: A seventh and possibly last omnibus of Vinland Saga is also out. Don’t let this series hit the dreaded hiatus wall.

ASH: This series is incredible; I really hope we’ll get to see more.

SEAN: And a 5th volume of shonen romance Your Lie in April.

ASH: I’ll admit, I’ve fallen a bit behind on this one.

Yen Digital also has a large number of releases, including several debuts. Aoharu x Machinegun is a GFantasy series, but I’m afraid that doesn’t make up for it being in the survival game genre. Still, could be good. 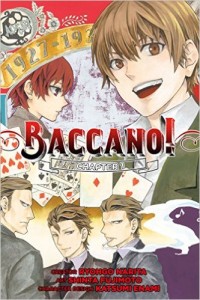 Baccano! may not have its light novels coming out till April, but Yen is able to serialize its new prequel manga that began in Young Gangan this fall. The first three chapters are out next week. I adore Baccano!.

Black Detective is a Shonen Gangan series that looks to be a mystery, as you might gather from the title.

MICHELLE: With a sadistic lead and masochistic assistant, apparently.

Of all of Yen’s ‘digital only’ announcements, Saki was probably the one that generated the most excitement and annoyance – excitement over the release, annoyance over the lack of print. Given that it’s a seinen mahjong series with a bunch of busty female leads, though, I think we’re pretty lucky to see it at all. I can’t wait for it myself, I’ve heard a lot of good things about this series.

MICHELLE: I’ll even forgive boinging bosoms for that!

Lastly, a 2nd volume of Unknown.

Are you getting any of this with your Christmas gift cards?