SEAN: A relatively quiet week, possibly as everyone’s saving up for the week after this, which may be the biggest week I’ve seen in manga ever. But for now, things are peaceful. 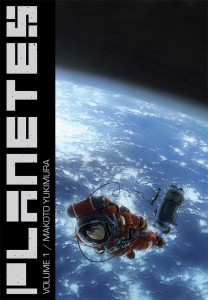 Dark Horse has the first Planetes Omnibus, and if you have not read this series before (Tokyopop released it a while back), get it. Even if you have, get it. It’s supposed to be spiffed up. Planetes is one of the really good ones that every manga owner should have.

MICHELLE: Ooh, I forgot this was being rereleased. I never actually finished the TOKYOPOP volumes. Bad me.

ASH: I love this series! (The anime was well done, as well.) I’m very happy to see the manga coming back bigger and better than ever.

ANNA: I also love this series, and have saved the old Tokyopop volumes. I’m glad that more people will get a chance to read this manga, it really is something special.

MELINDA: I’m so excited about this. I missed out on the original release, and this is something I’ve wanted to read for a long, long time.

SEAN: I do note that I use Diamond Comics release dates for Dark Horse titles in this list, as that’s their primary distributor. Same with Udon. Other retailers may get in in a week or two later.

Seven Seas has a 3rd omnibus for Freezing, a very Seven Seas-ey title.

And a 4th volume of Servamp, which is not quite as Seven Seas-ey, but it does try hard.

Vertical has a 2nd omnibus for Tokyo ESP, whose first volume I enjoyed more than I expected to.

ANNA: I haven’t tried this yet but it sounds like I should look into it!

SEAN: And an 8th volume of Witchcraft Works, which I think is almost caught up with Japan?

ASH: If so, that’ll give me time to get caught up, too; I’m behind. 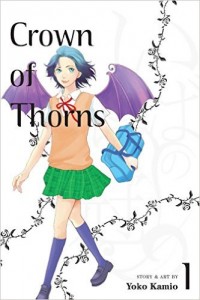 SEAN: Viz has a digital-only debut released next week, Crown of Thorns. This is a Betsuma series by Youko Kamio, creator of Boys Over Flowers. That alone should be enough to make people check it out.

MELINDA: Mostly I’m just excited because they are. Who can resist such squee?

SEAN: We’re almost at the end of Deadman Wonderland, with Vol. 12. Are they still in prison?

Whereas even at volume 16, Itsuwaribito still has a ways to go.

Lastly, there’s a 15th volume of Magi, which, being a Shonen Sunday title, no doubt needs more love. Certainly I love it.

ASH: One of these days I’ll actually follow through and give the series a try. And probably my love.

ANNA: I just ordered some volumes to fill in my collection, and am going to start getting caught up. I enjoyed the first few volumes of the series very much. It also has my love!

SEAN: Are you picking any of these up next week?