SEAN: Next week sees the release of Monthly Girls’ Nozaki-kun from Yen Press. And some other books, I guess.

SEAN: We’ll start with the 2nd omnibus of Kurosagi Corpse Delivery Service from Dark Horse, which if you haven’t read the series yet, and aren’t already getting Nozaki-kun, is well worth your time. 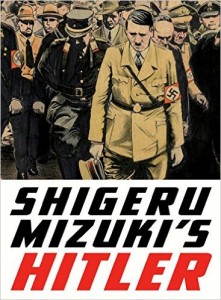 SEAN: Shigeru Mizuki’s examination of the Showa years was fascinating but a bit low on actual Hitler himself, so now we get a one-volume manga from Drawn & Quarterly tackling that exact subject, Shigeru Mizuki’s Hitler.

Cage of Eden 19 from Kodansha is close to the end, and hasn’t had anyone die horribly in a while, so may get a bit serious here, possibly.

My Little Monster 11 will also likely be series as it deals with fallout from the last volume.

MICHELLE: Painful, yet wonderful. I love this series.

SEAN: Noragami has its 8th volume, and has gotten quite popular, the sort of popularity that Nozaki-kun will soon have.

Yamada-kun and the Seven Witches has a 5th volume of comedy, supernatural abilities, and teasing of bisexuality that is unlikely to ever deliver.

ASH: But one can hope!

SEAN: From One Peace, we have the first volume of the manga adaptation Rise of the Shield Hero, whose novel OP released earlier. It runs in Comic Flapper, always a good thing in my book.

MELINDA: I need to give this a look.

SEAN: Seven Seas gives us a 7th volume of Devils and Realist, which is I assume still battling over hell.

Evergreen gives us a 3rd volume of angst, teens with wasting illnesses, and “are they siblings or lovers?” back and forth.

Haven’t You Heard? I’m Sakamoto gives us a 2nd volume of Sakamoto being awesome. If you like this sort of series, go get Nozaki-kun as well. 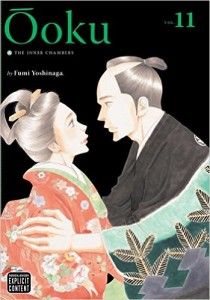 SEAN: I am very angry at Viz for releasing the 11th volume of Ooku next week, as it means that I likely won’t have a unanimous Pick of the Week for Monthly Girls’ Nozaki-kun.

MICHELLE: And this is the final volume of Ooku, as well, I believe.

MELINDA: I’m pretty psyched about this.

ASH: I think it might still be ongoing! (Or at least I hope.)

SEAN: Luckily, the 9th Terra Formars will not have that problem.

And a 2nd Ultraman volume is out as well.

ASH: The first volume ended with a pretty great hook; the series has definite potential.

SEAN: Yen On has 4 novels (Monthly Girls’ Nozaki-kun is not based on a light novel, in case you were wondering). Accel World 5 will hopefully be a bit lighter in tine after the first few leaning heavily on teen drama.

A Certain Magical Index’s 5th volume gives us an attempt to rehabilitate its previous horrible villain, as well as an adorable loli. But don’t worry, Touma and Misaka are in it as well.

Durarara!! has a 2nd volume, which focuses on a serial slasher who is making life chaotic in Ikebukuro… so situation normal for this series.

Log Horizon gives us a 3rd volume, which is I think the first of a two-parter. Will it continue to lean on politics, or will we get more battles?

You’d think Yen Press would release Monthly Girls’ Nozaki-kun by itself this week, but no, they also have 19 other releases. To start off, a 5th volume of creepy shoujo manga Ani-Imo.

Are You Alice? is up to double digits and has perhaps answered that by now. It’s headed for an ending, but not there yet.

Black Butler gives us Vol. 21. You can also now enjoy the individual chapters if you want instant gratification. 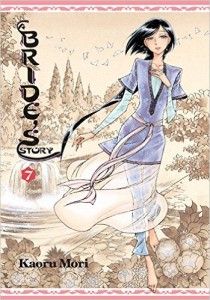 It’s time for our annual release of A Bride’s Story with Vol. 7. It will no doubt be excellent no matter what, but who will it focus on?

MICHELLE: I really need to get caught up on this but now I’m so far behind it’s daunting.

MELINDA: This is always a treat!

ASH: I love A Bride’s Story so much!

SEAN: BTOOOM! is at Volume 12 and shows no sign of stopping. I would say this proves there is no God, but the existence of Monthly Girls’ Nozaki-kun makes me reconsider that.

MICHELLE: Meanwhile, I have no desire to get caught up on this.

SEAN: I wasn’t impressed with The Devil Is A Part-Timer! High School!!, but perhaps a 2nd volume will try to do more with the high school AU premise.

The Disappearance of Nagato Yuki-chan looks like it might wrap up its love story in this volume, and the cover certainly looks like a final one. It is final? Nope.

A new series from Yen. No, not Nozaki-kun, that will be coming. Instead it is Dragons Rioting, a series that features a boy with an illness that kills him if he gets aroused, lots of big-breasted fighting women in high school, and runs in Dragon Age. Don’t say I didn’t warn you.

MELINDA: Just reading the premise makes me want to die.

SEAN: Final Fantasy Type-0 Side Story Vol. 2 is the sort of series that exhausts me just typing it out.

High School DxD has a 7th volume, in case BTOOOM! and Dragons Rioting weren’t enough for you.

The Honor Student at Magic High School is a spinoff of a novel Yen licensed but had to delay, so once again we get the spinoff first. Hopefully I won’t get too spoiled.

Inu x Boku SS is rapidly heading to a climax with its 9th volume.

Is It Wrong To Try To Pick Up Girls In A Dungeon? has its 3rd manga volume, for those who avoid novels.

And there’s a 3rd omnibus of Karneval, which reminds me I still need to read the 2nd. 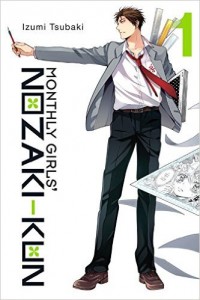 At last! the moment we’ve all been waiting for! The debut of Izumi Tsubaki’s Monthly Girls’ Nozaki-kun! You’ll laugh! You’ll cry! You’ll grow as a person. Well, no, you’ll only laugh. but that’s enough. BUY THIS.

MICHELLE: Me, too! Especially after volume 19 of Oresama Teacher was so good! I’m in a Tsubaki state of mind!

MELINDA: After all the hype, how can I possible turn away?

ASH: You can’t! You must become one of us!

SEAN: It feels like an anticlimax to discuss books after Nozaki-kun, but here they are. A 2nd Prison School omnibus will continue to be the Prison School-iest manga ever.

ASH: Definitely not a series for everyone, but I’ll be reading more of it.

SEAN: Puella Magi Tart Magica is not over with Vol. 2, I hear, but still stars Jeanne D’Arc, so I can’t expect happy things.

School-Live! just had an anime air this past summer (Gakkou Gurashi in case you wondered), and this is the manga source, from Manga Time Kirara Forward. It’s supposedly a cute Kirara school club series… but let’s just say, expect zombies.

Lastly, I could say something about the third Trinity Seven volume, but I will instead remind you to pick up Monthly Girls’ Nozaki-kun.

Besides that, what else are you getting next week?