SEAN: Good news! Every week in November has an absurd amount of manga coming out – except next week! Bad news – the Manga Bookshelf team is going to be finding pick of the week very hard, I suspect. 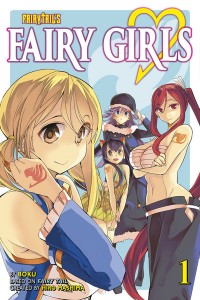 Kodansha has a spinoff of Fairy Tail called Fairy Girls, which, as you may have guessed, is about the girls in Fairy Tail. It has a different author, though, and looks to be even more cutesy and fanservice-oriented than the main series – which is saying something.

And if you missed Fairy Tail to begin with, why not try the new 1000-page omnibus of the first five volumes? This is a ‘Colossal Edition’ style release.

ASH: That is a lot of manga in one volume! The Master’s Edition, indeed.

SEAN: Seven Seas has the second and final volume of Bodacious Space Pirates: Abyss of Hyperspace, which has female pirates in outer space, and I think that no other words are needed.

And for those who like dragons and nudity (I suspect the core fanbase reverses the order), there’s an 8th volume of Dragonar Academy.

SubLime has a 4th volume of Love Stage!!!!, which I’ve decided to add a ! to for each new volume.

ASH: I’ll admit: I’ve been collecting this series, but I actually haven’t read any of it yet.

ANNA: Huh, I think I have a few volumes, I should read them!

SEAN: The 11th omnibus of Ranma 1/2 ups the stakes for both Ranma and his father, as it sees the debut of Nodoka Saotome, Ranma’s mother who has certain ideas about what constitutes a “man among men”, and sex changes are probably not in that list.

The 19th volume of Rin-Ne I expect has no real premise-altering developments like that, but I bet it has a lot of ghosts who are secretly (or not so secretly) jerks.

Lastly, there is an 8th volume of superhero BL tease with Tiger & Bunny.

MICHELLE: I seldom rave about RIN-NE and Tiger & Bunny, but I do like both of them in a low-key kind of way.

SEAN: Taking a breather? Or getting something from the above list?