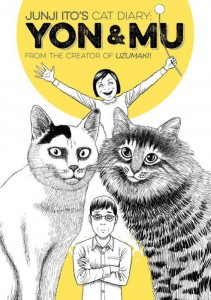 MICHELLE: There are a few things I’m interested in picking up this coming week but, ultimately, my heart belongs to kitties. Junji Ito is responsible for some incredibly terrifying imagery but I am hoping he’ll elicit warm and fuzzy feelings instead with Junji Ito’s Cat Diary: Yon & Mu, brought to us this week by Kodansha Comics.

SEAN: I continue to be drawn towards Yen’s light novel program, so I’ll make my pick the third volume of Sword Art Online Progressive. Seeing the author return to his original setting with added years of experience under his belt has led to better writing and greater depth, and having it limited to one floor per volume is also a good idea. Also, Kirito x Asuna OTP.

ASH: I’m completely with Michelle on this one. While there are several manga being released this week that I’ll definitely be picking up, by far I’m most excited for Junji Ito’s Cat Diary: Yon & Mu.

MELINDA: There are a number of releases I’m interested in this week, including my colleagues’ picks, but I simply can’t ignore anything involving Yun Kouga. I’ve waxed eloquent (or at least waxed enthusiastic) about her works time and again, and though Akuma no Riddle was somehow not on my radar at all before this week, there’s no way I’d miss it. I’m sure I’ll miss her artwork on this series, but it was always her particular way with writing that really hooked me. Akuma no Riddle is my only possible choice this week.