SEAN: It’s the week of NYCC, so let’s keep this Manga the Week of short and sweet.

Dark Horse has a 10th Lone Wolf and Cub omnibus.

ASH: I really need to sit down and catch up with Lone Wolf and Cub now that it’s being released in an edition I can actually read… 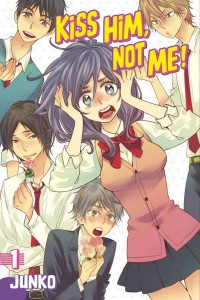 SEAN: Kodansha debuts a series that some may have already seen on Crunchyroll’s manga site, the very well titled Kiss Him, Not Me. A warning: there is ‘sudden weight-loss makes me attractive’ here, as in Let’s Dance a Waltz. That said, the annoying premise is used entirely for comedy here, as our heroine is far more interested in pairing her hot guy suitors with each other.

MICHELLE: Yeah, I saw the weight loss thing and it disinclined me to investigate further. I’ll wait on others’ reviews of this one.

MELINDA: Ugh, not that again.

SEAN: Noragami is up to Volume 7 and making me wish I’d kept up with it, as it’s apparently insanely popular now.

ASH: Very popular! I’ve been enjoying it, too.

If you missed the Love in Hell volumes from a while back, there’s a Complete Collection coming out, also from Seven Seas.

The Seven Seas debut is Merman in My Tub, from Media Factory’s oddball magazine Comic Gene. If Monster Girls are a big hit, will Monster Guys sell just as well? Especially if there’s BL subtext? 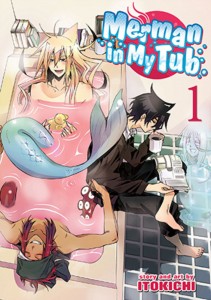 ASH: I’m willing to give it a try!

ANNA: Hasn’t there already been a merman BL/yaoi title published over here? Is this an established genre?

SEAN: SubLime gives us a 3rd volume of The World’s Greatest First Love. Amazon seems to be listing Vol. 4 for next week as well, but I’m not sure if that’s accurate.

ASH: Yeah, I’m pretty sure it’s not. Volumes 3 throu 5 were delayed some.

SEAN: And Vertical has a 7th Witchcraft Works. They’ve almost caught up with Japan.

ASH: Another series I need to catch up on myself!

SEAN: Viz has a 56th volume of Case Closed, and will never, ever catch up with Japan, but at least it’s still coming out regularly.

Deadman Wonderland continues to head for a climax, but it’s not there yet with Vol. 11.

Lastly, we get a 14th volume of Magi, which continues to features our leads separating to have their own adventures/level up.