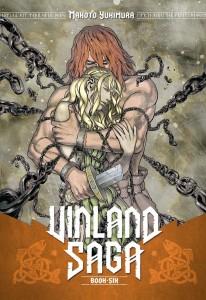 MICHELLE: The two volumes I am most looking forward to this week hail from two very different series I love a lot and which only have a few volumes left. I think I’ve probably praised My Little Monster more often and more recently, though, so I will cast my vote this time for Tsutomu Nihei’s Knights of Sidonia, which I love fervently. I really can’t believe that it’s ending soon, but I intend to cherish every panel until it does.

SEAN: No question here: the final volume of Showa is absolutely my pick of the week. Shigeru Mizuki’s book is 60% history textbook and 40% biography, and it’s to his credit that we find both equally riveting. I can’t wait to see the conclusion.

ASH: Vinland Saga! It’s been about a year since the fifth omnibus was released, and the fate of the series in English will depend on the success of the sixth and seventh. So far, the historical epic has been excellent; I’ve been anxiously waiting to read more.

ANNA: I absolutely agree. Vinland Saga is a great series and it deserves more support. Buy a copy or three!!!!!

MELINDA: Though there’s a lot of manga coming out this week, I admit it’s mostly series I’m not following. That is, of course, with one BIG exception, the glorious Knights of Sidonia, which is worthy of my pick any week. I’m going for Sidonia.