SEAN: Did I mention Yen’s digital rollout makes next week even longer? 30 titles. 30. Let that roll around your head for a while. 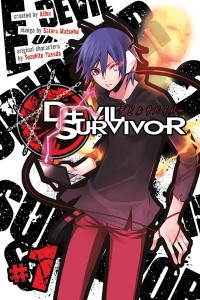 Before we get to Yen, let’s talk Devil Survivor, a new Kodansha series based off of an RPG that’s apparently quite popular. Lots of demons here.

Seven Seas has a 12th volume of Haganai: I Don’t Have Many Friends, whose fandom I’ve heard has completely imploded with the latest LN revelations. Luckily, this is the manga, and we’re a number of volumes from that.

Vertical Comics has the penultimate 11th volume of Mobile Suit Gundam: The Origin. So happy this series came out over here.

ANNA: Yay for Gundam: The Origin! I need to go on a reading binge and get caught up on this series.

SEAN: And Vertical also has My Neighbor Seki 4, which is nothing like Gundam but also delights me.

ASH: As it should! My Neighbor Seki is wonderful.

SEAN: Viz Digital has a debut that I believe is another JManga rescue, though I’m not sure about that. Chocolate Cosmos is a Ribon series about a young girl looking for love, so it’s definitely for Beat fans. I think there was a translation competition that centered around it.

MICHELLE: Ooh, I didn’t know about this one! It’s by Nana Haruta, mangaka of Cactus’s Secret, which came out a few years ago.

ANNA: That sounds really interesting, I will have to check it out!

SEAN: And now on to Yen Press. We’ll start with the Yen On line. Kagerou Daze’s first novel was rather diffuse and obtuse – somewhat deliberately – and I am both interested in the 2nd volume and hoping I get more of a handle on it.

Kingdom Hearts has a new novel as well, Chain of Memories. Are Mickey Mouse and company still in this series?

I don’t know if Melinda has had the time to read Pandora Hearts: Caucus Race yet, but if not, she’s now even more behind, as the 2nd novel is out next week.

MELINDA: Melinda has not, and she’s a little bit wary of a Pandora Hearts novel series, but she’ll most likely succumb. 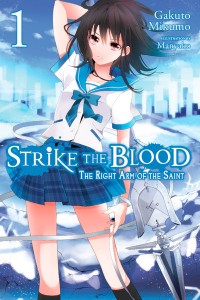 SEAN: The debut novel this month is Strike the Blood, which is an action fantasy series with vampires, and thus perfect for Yen, really.

If the creepy humiliation vibe of Kakegurui – Compulsive Gambler didn’t put you off, a 3rd volume is here for you.

My Monster Girl’s Too Cool For You seeks to hit on a popular recent trend, and for once seems to begin with a rejection rather than a sudden love confession.

The Royal Tutor was slighter than I was expecting, but decent enough, and a 3rd volume of that is here as well.

ASH: Wow, I’m behind. I didn’t realize we were already up to volume three!

SEAN: And we get complete in 3 separate volumes a series called Shut-in Shoutarou Koninami Takes On The World, whose name alone makes one think of Scott Pilgrim.

Finally, we get Yen’s copious print volumes. A 2nd Big Hero 6, based on the American movie. (I always love seeing Japanese adaptations of Western media.)

Black Bullet gets a manga series to go with the light novel we saw last month. I expect the lolicon tendencies I saw in the novel would bother me more in the manga.

Bloody Cross has an 8th volume.

And there’s a 2nd volume of possibly too cliched for its own good fantasy series Chaika the Coffin Princess.

Demon From Afar is up to Volume 4, which means by now the entire cast must have all died at least three times, right?

After a couple of Final Fantasy Type-0 side stories, we now have the Type-0 manga proper.

Surprise hit (at least with me) He’s My Only Vampire gets a 4th volume.

And a 4th Love at Fourteen will continue to alternate between “they’re so adorable!” and “…are you really going there?”

MICHELLE: I’m going to be catching up on this series soon!

ASH: I need to catch up, too, but I did enjoy the first couple of volumes.

SEAN: Not everything is about Madoka Magica, but the new spinoff certainly is: Suzuna Magica begins next week. 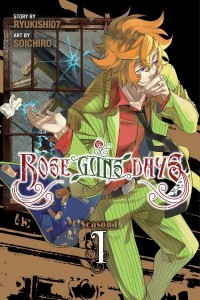 After the relative popularity of Higurashi and Umineko, it’s time for another Ryukishi07 sound novel getting an adaptation, this one somewhat lighter in tone – at least at first. Rose Guns Days is an alternate universe action thriller with lots of fistfights and “ladies of the evening”, and should be a ton of fun.

Spice & Wolf gives us an 11th manga volume. Don’t get it mixed up with the light novels.

MELINDA: I wish I liked these manga adaptations better. Alas.

SEAN: Triage X has hit double digits, a feat that makes me want to cry blood, but hey.

And a third (fourth) omnibus of Ubel Blatt, whose Volume Zero still haunts the list-obsessed.

Umineko: When They Cry has a 2nd omnibus for its 5th arc. Dlanor A. Knox is on the cover. I love Dlanor. So much better than Erika, whose presence sadly continues to permeate this arc, infecting it with her detective skills.

Lastly (at long last), a 10th omnibus of Until Death Do Us Part. Still not quite caught up with Japan, in case you were wondering.

Does anything in this huge pile appeal to your inner soul?